One of the primary insults slung between politicians during Israel’s election and coalition-building cycle has been tagging someone a “left winger” or accusing them of “running to the left.”

That’s an easy slur to toss around in a country where 97 out of 120 Knesset members would be considered right wing in one form or another.

In the last week, perhaps sensing he was losing his grip on power, Prime Minister Benjamin Netanyahu capitalized on that, lashing out several times at rival right-winger Naftali Bennett, accusing him of abandoning his principles and rushing to form a “left-wing government.”

But can the current proposed government actually be considered “left wing” – especially with an Orthodox Jewish right-winger such as Naftali Bennett as prime minister?

For many American Evangelicals, the prospect of a “left-wing Israeli government” sounds concerning. After all, it is members of the progressive left in U.S. politics that are voting against Israel and are more sympathetic to the Palestinian cause. And many supporters of Israel identify as right wing in their own country.

But “Left” and “Right” in Israel are not as neatly defined as they are in the United States.

The two-party system in the U.S. perhaps lends more clarity to its politics. But Israel's current Knesset is comprised of 13 vastly different parties – many of which are more or less special interest groups.

This makes a clear divide down the middle impossible.

So, what actually constitutes left and right wing in Israel?

The main answer is: It’s complicated.

And it makes forming a coherent coalition that is built on one clear set of principles nearly impossible.

Israeli politics runs on three general platforms: Peace and security (including the Israeli-Palestinian conflict and the settlements); the economy; and civil and social issues.

In broad terms, the right-wing ideology on peace and security takes a hardline approach to the Israeli-Palestinian conflict based on an inherent distrust of the other side and skepticism that peace is possible. The right refuses to give up land and promotes building new settlements. The left generally believes that peace will be achieved through negotiation, territorial concessions and a two-state solution.

This more or less fits the general right-left narrative about Israel in American politics.

But this is also where many Israeli parties divide.

WHO ARE THE MAIN PLAYERS ON THE RIGHT?

Currently, the most prominent right-wing party is Likud and the most famous right-wing politician is Prime Minister Benjamin Netanyahu. His tough policies on Iran and Hamas are characteristic of the Israeli right-wing approach.

But he also appointed the first openly gay Cabinet minister – something not quite considered right wing in American politics. And, by the way, the issue of abortion – which is legal and widely unopposed here – is not a divisive factor in Israeli politics as it is in America.

Further right wing than Netanyahu is Yamina leader Naftali Bennett, who stands a good chance of becoming the next prime minister. Another right-wing party comprised of several Likud defectors is New Hope, led by Gideon Sa'ar.

Then, even further right wing than Bennett and Sa'ar is the Religious Zionism party, comprised of Orthodox Jews who are extremely nationalistic. Some of them are disciples of the late Rabbi Meir Kahane, whose political party, Kach, was banned in Israel because its platform “incited racism,” and was declared a terrorist organization by the United States.

And, while their views on the biblical land of Israel jive with Evangelicals, perhaps believers would find it surprising that organizations and individuals that fall under this umbrella are generally opposed to – and are sometimes violent against – Messianic Jews and even Christians in the land. One member of Religious Zionism, Itamar Ben Gvir – who is also a lawyer – defended the suspects in the arson of the Church of the Fish and Loaves.

Another fascinating factor, which is perhaps harder to grasp from outside Israel, is how two so-called right-wing parties can be diametrically opposed and refuse to work together.

The ultra-Orthodox parties Shas and United Torah Judaism (UTJ), and the secular Yisrael Beytenu party are all “right wing” on security issues. In general.

But when it comes to issues of synagogue and state, they vehemently part ways.

Conservative in that regard, both Shas and UTJ want to keep the rabbinate (which is run by ultra-Orthodox rabbis) in control of national laws related to marriage, immigration and kosher laws and they want their community exempted from Israel’s mandatory military service.

However, Shas and UTJ are rather liberal when it comes to economic issues, advocating for entitlement programs that suit their communities, a strong welfare state and funding to study Torah rather than work. These two parties have aligned themselves with Netanyahu and Likud over the past few elections, which has allowed party members to land powerful positions in the government – and has given the 12% ultra-Orthodox population a disproportionate representation in the Knesset.

On the other hand, Yisrael Beytenu would represent the views of most secular Israelis who serve in the army, pay taxes and want to break the ultra-Orthodox monopoly on civil issues. Many young people must marry abroad because their weddings here would be "illegal" according to the rabbinate. Yisrael Beytenu’s leader Avigdor Liberman said he will not serve in a government with the ultra-Orthodox and, true to his word he didn’t, causing the country to go to another round of election within the past two years.

WHERE DO THE ARAB PARTIES FIT IN?

However, Ra’am – the Israeli branch of the Muslim Brotherhood – just broke with Arab tradition and joined the coalition for a right-wing, center government – thus shattering the left-right concept entirely.

Netanyahu himself has courted opposite ends of the political spectrum – the Jewish nationalists of Religious Zionism and the religious Muslims of Ra’am – to sit with him in this latest attempt to build a government.

The radicals of Religious Zionism are the antithesis to the Arab political parties who are pro-Palestinian and they frequently clash with Arab Knesset members, calling them “supporters of terror.”

Yet – and here is where it gets more tricky – Religious Zionism and some of the Arab parties are the ones that band together when it comes to opposing the gay pride parade in Jerusalem and voting against LGBTQ issues.

SOMEWHERE IN THE MIDDLE TO LEFT

The center includes Yesh Atid – which tends rightward on economic issues – and Blue and White, which together have 25 seats. Yesh Atid was founded to represent the secular middle class with a focus on civic, socio-economic and government reform issues including ending military draft exemptions for the ultra-Orthodox.

Blue and White is led by a former IDF general, Defense Minister Benny Gantz, and is strong on security issues, opposes further disengagement and rather than a two-state solution uses this language: “deepening separation from the Palestinians,” while also guaranteeing “a Jewish majority in Israel” and preserving the country as a “Jewish and democratic state.”

It is also a secular party and wants to ensure that the ultra-Orthodox are drafted to the military and that businesses are allowed to open on Shabbat.

The once powerful Jewish-Israeli left has dwindled to two parties: Labor and Meretz who, combined, have 13 mandates. These parties advocate for legalizing marijuana and allowing same-sex marriage, but they are also willing to serve in right-wing governments. 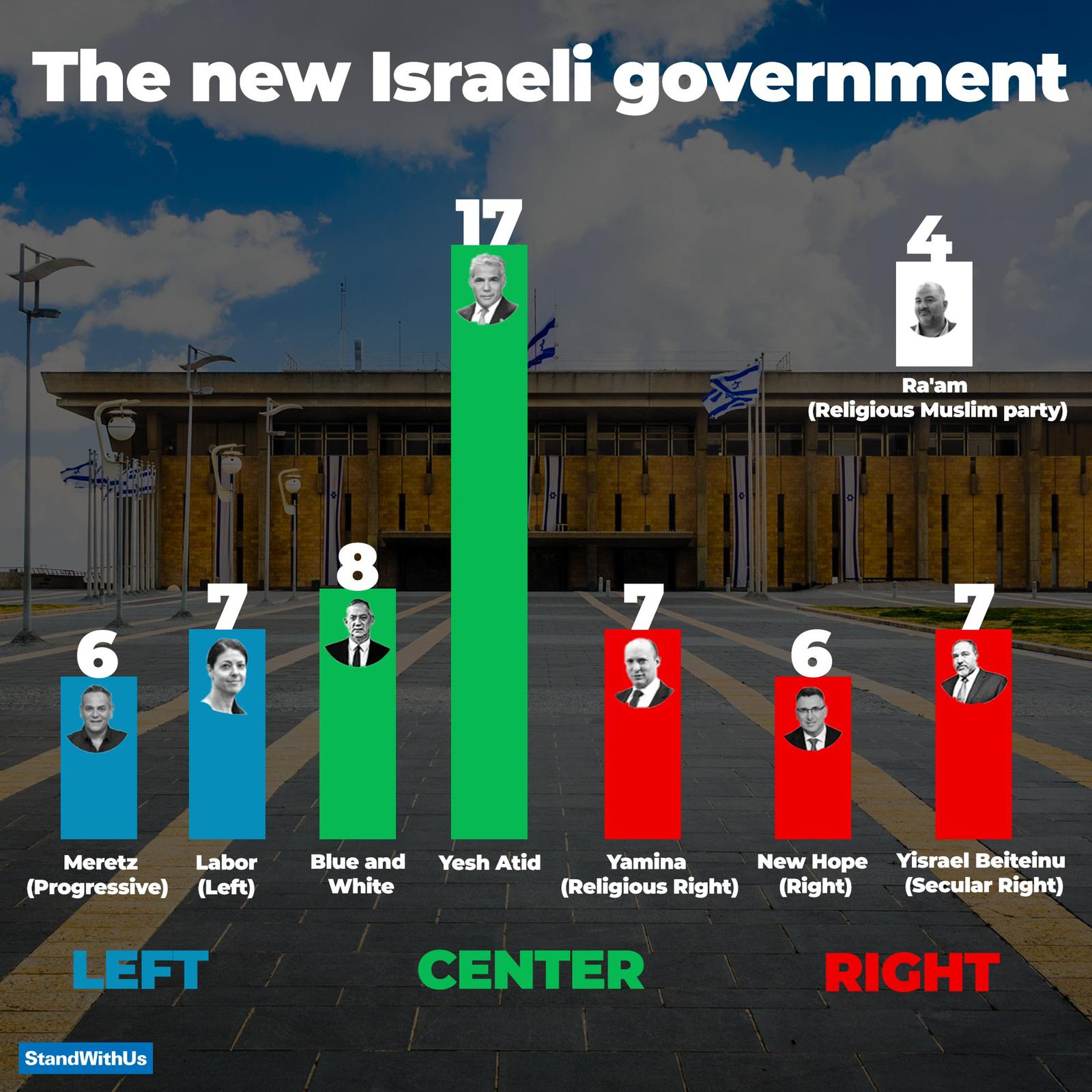 SO IS THE PROPOSED COALITION LEFT, RIGHT OR WRONG?

The short answer is center-right or right-center, depending on which policies take the stage and who becomes the dominant voice of the coalition.

But it is important to remember that it is rare to have a pure right- or left-wing government in Israel. Left-wing Labor has agreed to serve in several of Netanyahu’s governments, including the most recent in 2020 though there is little that connects the far ends of the political spectrum ideologically.

And now the far-left Labor has agreed to serve under the far-right Yamina leader Naftali Bennett.

Also, recall that it was the right-wing former Prime Minister Ariel Sharon who decided to pull out of Gaza, withdrawing Israel completely from the Gaza settlements in 2005.