Not even two decades ago, a sitting Arab Knesset member was suspected of treason, stripped of his parliamentary immunity and fled Israel. Azmi Bishara claimed he would never see a fair trial in Israel and so he has yet to return to the country.

Though this is a rare example, Bishara’s story underscores the inherent lack of trust that exists between Jewish and Arab Israelis and perhaps highlights why Arab Knesset members have never joined – or have been asked to join – a coalition in the Israeli government.

On one hand, right-wing Jewish groups paint the inclusion of an Arab party as an anathema to a coalition and at the same time, Arab Knesset members themselves traditionally resist joining a coalition, seeing it as a betrayal of their own people.

But that was all shattered last night when the Ra’am party agreed to join the eight-party coalition with centrist Yair Lapid at the helm and right winger Naftali Bennett taking the first rotation as prime minister.

It is a historic day, 73 years into the founding of the State of Israel. 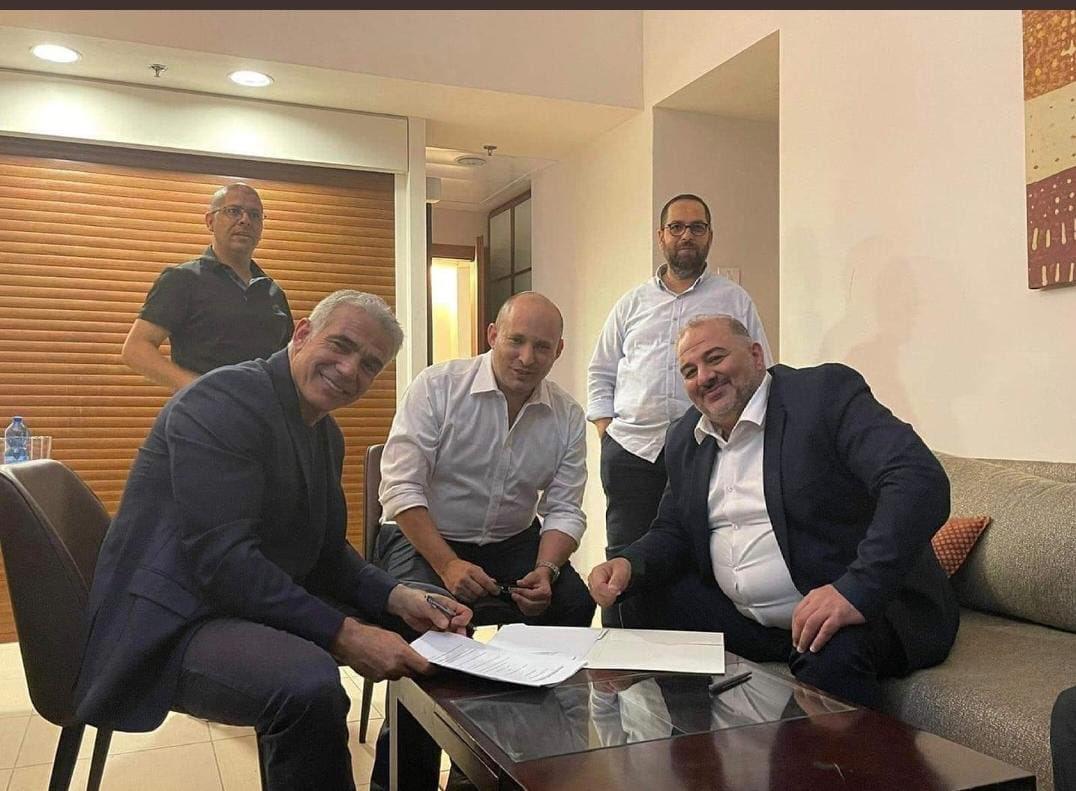 But the emergence of Ra’am's leader, Mansour Abbas – with his conciliatory tone and strikingly diplomatic behavior – had heads spinning in the political establishment for many months now.

And now, this is certainly shaping up to be the case.

Who is Mansour Abbas and who was courting him?

Abbas, 47, hails from a town called Maghar in northern Israel and is a dentist by profession.

And Abbas doesn’t lead just any party. He is the head of Ra’am, the United Arab List, which is actually the Israeli branch of the Muslim Brotherhood.

Yet, Abbas was first courted by Prime Minister Benjamin “Bibi” Netanyahu for a seat at the table in his government as he tried form one.

In fact, it was Netanyahu’s courting of Abbas that gave legitimacy to the idea of a right-wing coalition including an Arab party. Bibi’s kosher stamp of approval ended up backfiring on him and benefiting Lapid.

Abbas played it smart though, never fully casting his lot with Bibi and yet not committing to the "change government" until the last minute.

For his refusal to reject Netanyahu outright, another Arab Knesset member, Ayman Odeh, accused Abbas of collaborating “with the inciter.”

But Netanyahu was unable to form a coalition – mainly because of Abbas. The very thought of teaming up with “supporters of terrorism,” as they put it, sent shivers through the Religious Zionism party, headed by Bezalel Smotrich who emphatically declared his opposition to serving with Abbas.

Abbas refrained from being drawn into a tit-for-tat with the right winger and has kept his hands clean of any political fights during the past few months.

With the mandate to form a government being passed to opposition leader Yair Lapid, Abbas has found his way into a coalition – this time in the anti-Netanyahu bloc – the "change government."

In exchange for his support of the coalition, Abbas has secured a huge amount of money – $16.3 billion – to develop and improve infrastructure in Arab communities and to fight violence and organized crime there.

In addition, three unrecognized Bedouin villages will be legalized in a government decision, according to a statement from Ra’am.

In another amazing victory for Israeli Arabs, Ra'am said the coalition agreed to discuss amending a controversial law, which many Arabs view as discriminatory because it specifically singles out illegal construction in their communities.

It must be noted, Abbas brings only four seats to the table. Those four seats were going to push Netanyahu over the 61-seat threshold into a majority government. But now those four seats have aided Lapid’s efforts to cobble together a coalition.

In the last few months, Abbas entered Israel's political scene more deeply than other Arab politicians. He sided with Lapid in a vote against Netanyahu in exchange for a promised spot on “a new parliamentary committee for the eradication of violence in Arab towns as well as a seat on the Finance Committee.”

“It will go down in history as the day Israel’s Arabs finally entered its political fray,” an article in The Jerusalem Post stated.

Abbas has been on a “pragmatic political path to electoral success,” putting the needs of his constituency above the Palestinian issue, according to Dan Diker and Khaled Abu Toameh writing for the Jerusalem Center for Public Affairs, calling it an “internal Abraham Effect.”

“This was not a short-term tactical move. During 2020, Abbas had publicly signaled his openness to work with conservative Zionist coalitions,” they wrote. “Abbas appears to have moved Arab politics from years of political and ideological rejectionism and inflammatory rhetoric against Israel.” 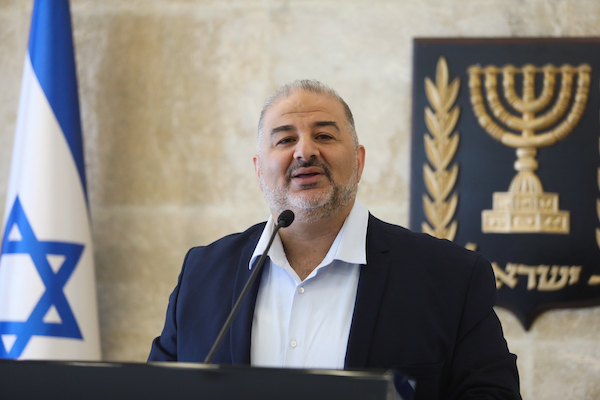 Mansour Abbas, head of the Ra'am party, leads a faction meeting, in the Israeli parliament on April 19, 2021. (Photo: Olivier Fitoussi/Flash90)

The Muslim Brotherhood of Israel

Unlike the emerging Arab minority that has assimilated into Israeli society, speaking perfect Hebrew and serving in the Israeli army, Abbas represents the other extreme of Arab-Israeli citizens.

But as opposed to the emergence of an Arab minority that has assimilated into the majority-Jewish Israeli society, speaking perfect Hebrew and serving in the army, Abbas represents the other extreme of Arab-Israeli citizens.

“The Islamic Movement in Israel is an Israeli branch of the Muslim Brotherhood, the ideological hothouse that spawned Hamas, al-Qaeda, ISIS, and other Sunni jihadist groups that view Israel as a fundamentally illegitimate country that should be expunged from the map,” according to an analysis published by the Begin-Sadat Center for Strategic Studies.

“The organization does not even try to conceal this aspiration,” writes Mordechai Kedar.

“Worst of all, everyone—from both right and left—is eager to be aided by the Islamic Movement, the ideology of which centers on the elimination of Israel as a Jewish and democratic state,” he says.

Kedar warns that “giving the Islamic Movement a kosher stamp of approval sets Israel on the same destructive path trod by Lebanon ever since Hezbollah became part of that country.”

Also, Diker and Toameh noted that many in Israeli society were suspicious that perhaps Abbas was using a “recognized strategy of political Islam based on penetrating a sovereign state’s political system to achieve Islamic ideological goals.”

Ra’am supports the two-state solution with East Jerusalem as the capital of a Palestinian state. Its constituency consists mostly of religious or nationalist Israeli Arabs.

But one secular Muslim told ALL ISRAEL NEWS that Abbas is too conservative a Muslim to represent her. Abbas stirred controversy when he supported conversion therapy for gays and he opposes special treatment for the LGBTQ community.

In contrast to the Northern Branch leader of the Muslim Brotherhood Raed Salah, Abbas has disavowed violence, and his Southern Branch is considered relatively moderate.

Even as Abbas’ overtures to Bibi and the right wing have also come as a shock to most Muslims – secular or not – Abbas said it need not be so.

“Most of the time, the Arab parties automatically are part of the Left, without considering key issues,” Abbas said in an interview with The Jerusalem Post in October. “I say this approach is mistaken and that we need to reposition ourselves toward the entire Israeli political spectrum and not one side. We are not in the pockets of the Left or the Right. We need to act within the interests of the Arab society that chose us.”

But he has also voted against the Abraham Accords, one of Netanyahu’s most stunning accomplishments.

“If there will be a real agreement with the Palestinians, there will be real agreements with 55 Muslim countries,” Abbas said at the time. “But what truly matters is that we are Israelis, and our actions are not supposed to be influenced by whether there is peace with Bahrain.”