JERUSALEM—Not only is the Iran nuclear threat to Israel, the Arab world, and the United States real and rising, it also has the potential to expand the number of Arab countries making peace with Israel, says President Joe Biden’s point man in Israel.

In my wide-ranging conversation with U.S. Ambassador Tom Nides for THE ROSENBERG REPORT on TBN, Nides defended the Biden administration’s diplomatic approach to deal with the Iran threat. [To watch the full episode, please click here.]

Indeed, as I wrote in my column yesterday, Nides said Biden is eager to see a nuclear deal 2.0 with the Iranian regime and that though discussions regarding the draft agreement have stalled in Vienna, the deal is certainly not “100% off the table.” 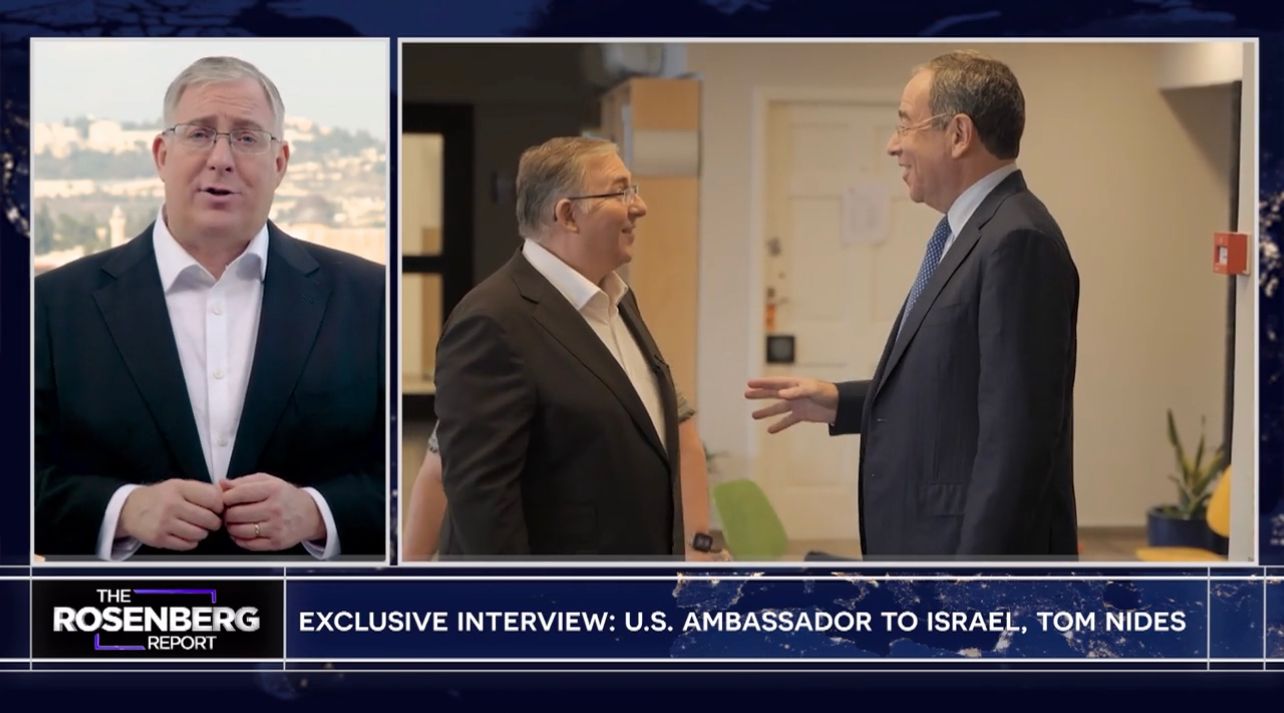 He warned that Tehran is “very close to breakout” – that is, to making the decision to enrich uranium all the way to 90% or greater in order to create military-grade fuel to create an arsenal of nuclear weapons.

Just yesterday, “in a letter to the International Atomic Energy Agency (IAEA), Iran…informed the agency that it has started enriching uranium to 60% purity at Fordo site,” said the semi-official ISNA news agency.

Such developments are driving incoming Israeli Prime Minister Benjamin Netanyahu to prepare to order the IDF to launch a full-scale attack on Iran’s nuclear facilities if the Biden administration does not move quickly and decisively to find another way to truly neutralize the Iran threat, says Tzachi Hanegbi, a longtime member of Knesset and Netanyahu confidante.

Hanegbi explained Netanyahu’s thinking in an interview with me on last week’s episode of THE ROSENBERG REPORT. 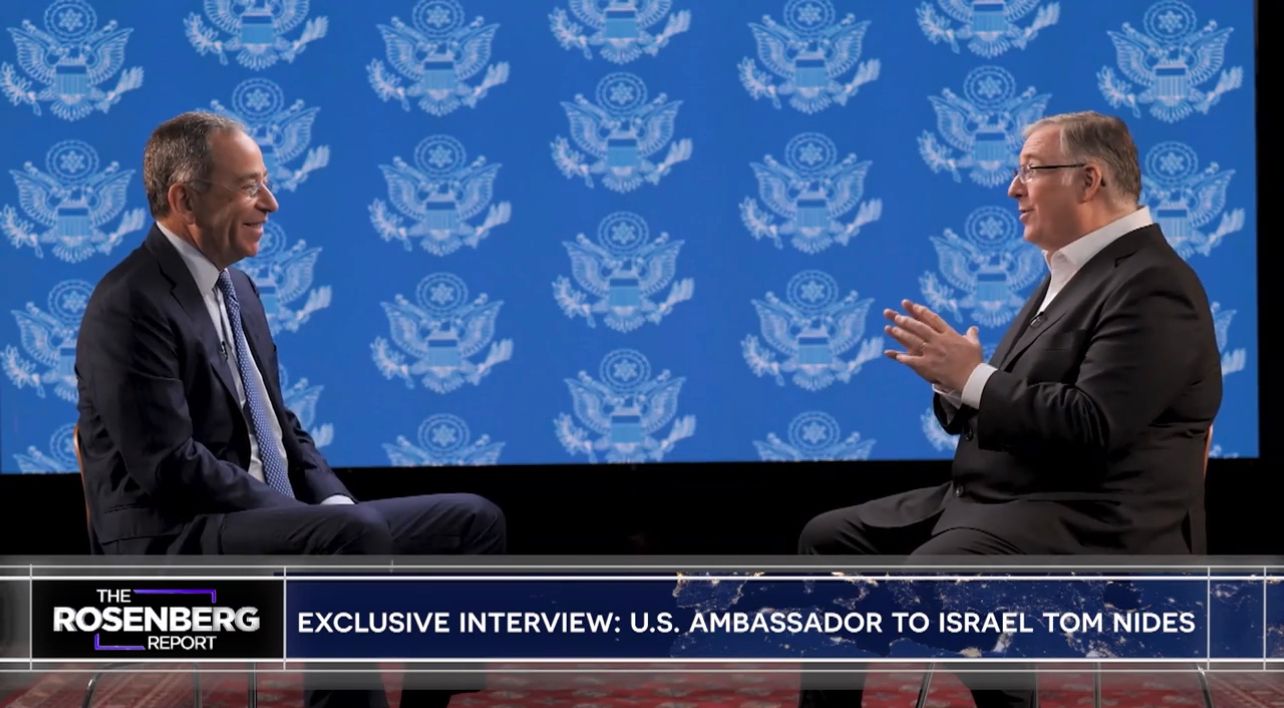 COULD ISRAEL AND THE SAUDIS SOON MAKE PEACE?

That said, the growing Iran threat is also having another effect.

Nides told me the Biden administration is keenly aware of how worried Saudi Arabia and other Arab states are about Iran.

He also said that Biden is personally committed to brokering an Israeli-Saudi peace agreement and is working “tirelessly” towards this goal.

In large part to make both countries safer from Iran.

“We thought the Abraham Accords made Israel a safer place, right?” Nides told me. “Morocco, Bahrain, the Emirates, obviously let’s not forget Jordan and Egypt – [all] that this makes this place [Israel] a stronger place. And I will I assure you, if Joe Biden was here, he would say, ‘Listen, Joel, would I love a normalization between the Saudis and the Israelis? Of course we would. It would not only be great for Israel, it would be great for the Saudis, and be great for the region. So we’re to work tirelessly with the Israelis and the Saudis.’”

Nides said pursuit of such an agreement is one of the main reasons that Biden visited Saudi Arabia last summer, despite Biden’s sharp criticisms of Saudi Crown Prince Mohammed bin Salman (MBS) in recent years.

Will the Saudis listen to Biden?

Does MBS want to give Biden such a historic foreign policy win?

But given that Netanyahu has also made an historic peace deal with the Saudis one of his top foreign policy goals, this is an area where Biden and Bibi may be able to work together.

It’s certainly worth watching and praying for.

Click on the video below to watch the full interview with Ambassador Nides.

Here is an extended excerpt of the interview, lightly edited for clarity.

ROSENBERG: Since you and I first sat down for coffee, I’ve been to Bahrain, UAE, Morocco, and I’ve met with top Saudi leaders. They’re nervous. You know this. It’s not just an Israeli-American thing. The Arab world is very worried. So, that’s what I’d like you to respond to. You’ve made your case on [President Biden’s possible Iran nuclear] deal. But they [Arab leaders] do not believe that there is a credible military threat [by the U.S.] on the table. And Dennis Ross – going back to your friend and mine – he says if there isn’t an absolutely crystal clear military threat [then] you can’t get the Iranians [to make a good and final deal and] you might not be able to get them there anyway…. So, people are nervous, and the talk is, as you've heard it in the last few days, “Is Netanyahu going to think, ‘I’m alone. I love Joe Biden. But I might have to go do this by myself.’ And none of us want to see a war.”

AMBASSADOR TOM NIDES: Okay, look, there’s a bunch of questions there. Let me first just say that Prime Minister Lapid – and Prime Minister Bennett before him – were very clear on their opposition to the deal. So, everyone has a different style [of expressing their views], right? Bennett had one style. Lapid had one style. It’s fine. They feel strongly – and have felt strongly – that we should not be in negotiations with the Iranians. They also understand, and if you believe what you read in the newspapers, that the Iranians are very close to breakout, very close.

ROSENBERG: Some have said just days away.

NIDES: So, because they’re very close to breakout – and again, that is a threat to the State of Israel, make no mistake….

ROSENBERG: And to the United States.

NIDES: Without question. So, how you deal with that threat is very important. What I will say to you again and again and again, okay, is that Joe Biden has said he will not allow the Iranians to obtain a nuclear weapon. That’s number one. And number two, all options are on the table. We are not going to articulate what we’re going to do. Joe Biden doesn't do that. By the way, nor did other presidents before them. We’ve been steadfast in our belief that we have Israel’s back. We are steadfast – and we have the back of the Jewish people – about the threats that are here. And we understand those threats. We understand the threat of Hezbollah and what’s going on with Hamas and we understand what’s going on in Syria. We’re very well aware of what the impacts of all of this are. And so Israel knows that. They know the cooperation here between the Defense Department and the IDF and the security forces. I said this to you when you were in my office

ROSENBERG: I’m glad you’re putting it on the record.

ROSENBERG: Okay. All right. You made your case. I appreciate it. So, the Saudis. You just brought them up. Wow. One of the most contentious relationships I’ve seen between the United States and an ally has been the President Biden’s personal relationship with the Saudis, and particularly his deep concerns about Crown Prince Mohammed bin Salman. I’ve had the opportunity to spend many, many, many hours with MBS. I actually do believe – without betraying confidences – my perception is the Saudis do want to make peace with Israel. And [this is] one of the questions, one of the things that you and I have discussed before, but let’s talk about it on the record. I actually think that one of the biggest foreign policy wins that President Biden could achieve would be brokering an historic Saudi-Israeli deal. But the trip [by Biden to Saudi Arabia over the summer] didn’t seem to go so well. At least the aftermath is that prices of oil are going up. So, where are we? And how can the president move that ball forward given there are a lot of complexities? But this would be a huge, huge deal for the world and certainly for the president.

ROSENBERG: Which has been his only point of agreement with President Trump.

NIDES: Yeah, but it’s just, I mean, the reality is we care. We thought the Abraham Accords made Israel a safer place. Right? Morocco, Bahrain, the Emirates, obviously, let's not forget Jordan and Egypt, that this makes this place a stronger place. And I will I assure you, if Joe Biden was here, he would say, “Listen, Joel, would I love a normalization between the Saudis and the Israelis? Of course we would. It would not only be great for Israel, it would be great for the Saudis, and be great for the region. So we’re to work tirelessly with the Israelis and the Saudis.”

ROSENBERG: Do you think that’s possible in the next two years?

NIDES: Absolutely. Absolutely I think it’s possible. You never know how these things plays out. But I think ultimately that’s what is important to us. What is important is the security of the region, the security for the state of Israel. And would we like it? Sure, we’d like it, and we will work tirelessly to achieve it.

ROSENBERG: Thank you, Ambassador. I am very grateful for you coming on to the TBN show and talking to Christian media and talking to us first after the elections.

ROSENBERG: I appreciate it. God bless you. We’re praying for you.

US Ambassadors Tom Nides, David Friedman to co-lead the 2023 International March of the Living through Auschwitz

One teen killed, at least 22 wounded in two bombings at Jerusalem bus stops

Are the members of the Jewish Power party radicals, activists or ideological diehards?