WASHINGTON, D.C.—After a modest handover ceremony at the Prime Minister's Office in Jerusalem today, a new prime minister will officially take over the reins in Israel at midnight tonight.

His name is Yair Lapid.

Born in 1963, he’s 58. Married. Has two children. And leads the second-largest political party in Israel.

Most Evangelical Christians around the world have never heard of him.

But ALL ISRAEL NEWS readers certainly have.

After all, Lapid was the first Knesset member who not only agreed to an interview with ALL ISRAEL NEWS when we launched in September 2020 but to a three-part interview.

WHY WE TOLD OUR READERS TO PAY CLOSE ATTENTION TO LAPID

We are a non-partisan news organization.

We don’t endorse candidates or parties.

But we do tell you whom to keep a close eye on and why.

And we (correctly) ranked Lapid #3 in our January feature story, “THE TOP 22 IN 2022: Here is the ALL ISRAEL NEWS list of the 22 most powerful, provocative and popular Israelis to watch this year.”

Let’s recap what we wrote at the time.

Last year, we placed Yair Lapid, then leader of the opposition, at No. 11 on our list of the 21 Israelis to keep a close eye on.

This year he has surged into one of the top spots, having emerged as Israel’s foreign minister and alternate-prime minister, on track to become the nation’s next prime minister in September 2023.

Netanyahu had long served as his own de facto foreign minister. Naftali Bennett, however, has focused mostly on economic and domestic matters, giving Lapid almost full reign over foreign relations.

Lapid has thrived in the position, becoming the first Israeli foreign minister to make official visits to the United Arab Emirates, Bahrain, and Morocco and doing an excellent job actively building upon the Abraham Accords. 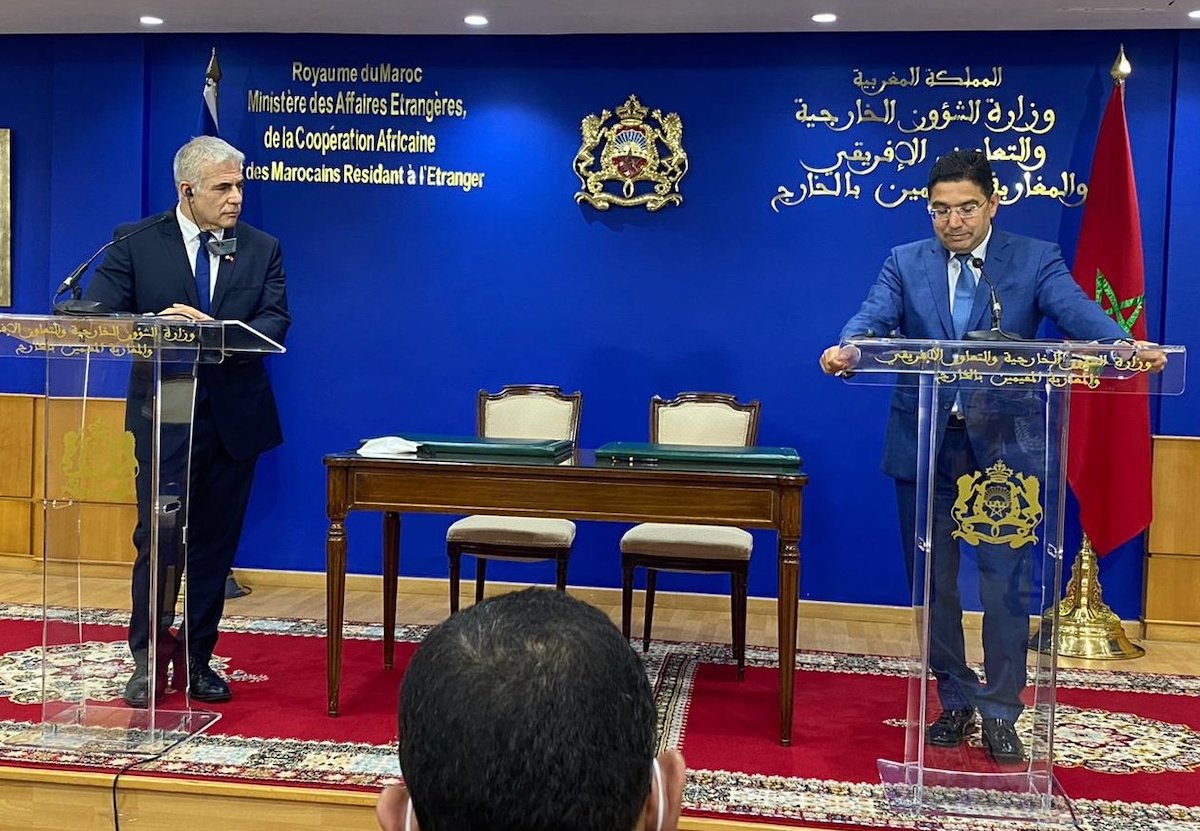 A force that cannot be ignored in Israeli politics, Lapid in 2012 founded his centrist yet Zionist party — “Yesh Atid” (There is a Future) — on a mission to clean up the political system, create a balance between religious and secular Jews, support the rights of women, LGBT and other minority groups, strengthen Israeli law enforcement and improve education and science.

In the 2013 election, Yesh Atid became the second-largest party in the Knesset with 19 seats.

Lapid appeared in TIME magazine's 2013 list of the 100 most influential people in the world and Foreign Policy's 100 Leading Global Thinkers.

In this latest election, Yesh Atid won 17 seats — the second biggest party in the Knesset after Bibi’s Likud faction — and Lapid received the mandate to form a new government. 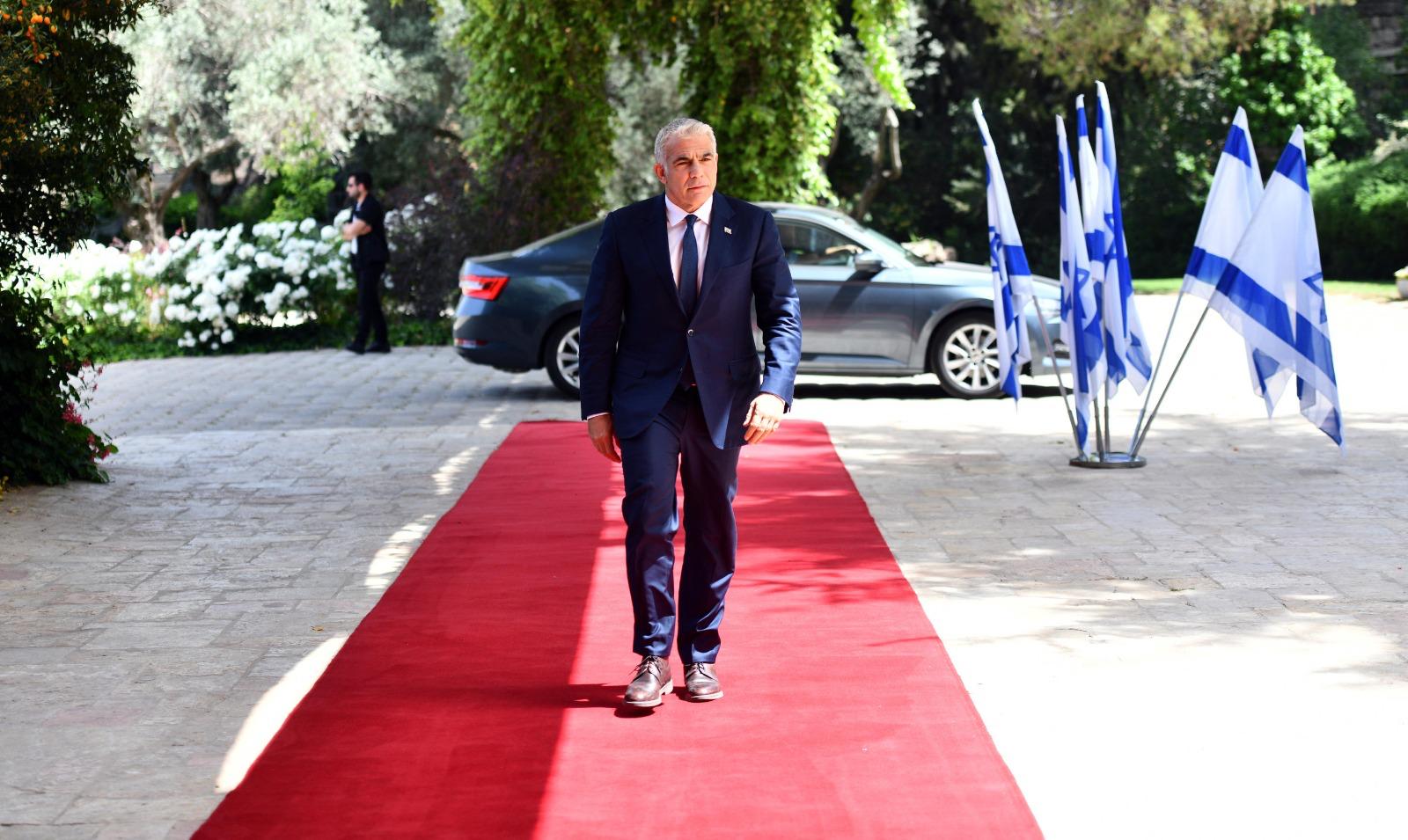 Yair Lapid on his way to receive the mandate to form the new government from President Reuven Rivlin in 2021. (Photo: Yair Lapid Twitter feed)

To the shock of most pundits, he successfully formed a highly-diverse and theoretically unwieldy governing coalition by giving Naftali Bennett the first rotation as prime minister.

This humble yet shrewd decision broke the deadlock that had set Israel in a two-year cycle of elections with no government.

Before entering politics, Lapid was a journalist who also published 12 bestselling books. The most popular was Memories After My Death, about his late father, Tommy Lapid, a journalist who created his own centrist party called “Shinui” (Change) and became a popular Knesset member.

GOING DEEPER: WHO IS YAIR LAPID?

Years ago, when I first met Yair Lapid, he was merely one of 120 members of Knesset.

He was a former TV broadcaster who had entered politics in 2012 and founded his own party, Yesh Atid, which in Hebrew means, “There Is A Future.”

From 2013 to 2014, he served as finance minister in then-Prime Minister Benjamin Netanyahu’s coalition government.

But when Lapid and I first connected, he was not in a position of notable political power or influence.

Still, he had politics in his DNA.

His father, Yosef “Tommy” Lapid, was a TV and radio journalist who decided to get into politics and eventually founded the moderate Shinui (“Change”) Party, rising to the positions of Israel’s justice minister and even deputy prime minister.

In many ways, the younger Lapid followed his father’s career path.

But how high would he rise?

Many Israelis have asked: In an overwhelmingly right-wing political environment, could an avowed centrist politician succeed in shaping the direction of the country?

Clearly, the answer is yes.

The centrist and telegenic native Israeli (sabra) who speaks excellent English has surprised many by racking up one unexpected success after another.

He and Naftali Bennett ousted their rival, Benjamin Netanyahu, by forming an unusual coalition of eight widely different political parties, ranging from right-wing to left-wing parties to the first Israeli Arab party every to help form a government in the modern history of the state.

If that were not enough, Lapid and Bennett:

REACHING THE TOP SPOT: NOW WHAT?

Last November, I met with Lapid at the Ministry of Foreign Affairs.

I gave him a copy of my new non-fiction book, “Enemies and Allies: An Unforgettable Journey inside the Fast-Moving & Immensely Turbulent Modern Middle East.”

In turn, he gave me a round-the-world survey of Israel’s foreign relations, country by country, region by region.

While our conversation was off the record, I can certainly report that he was smiling and quite upbeat about his future and that of the government he had helped built. 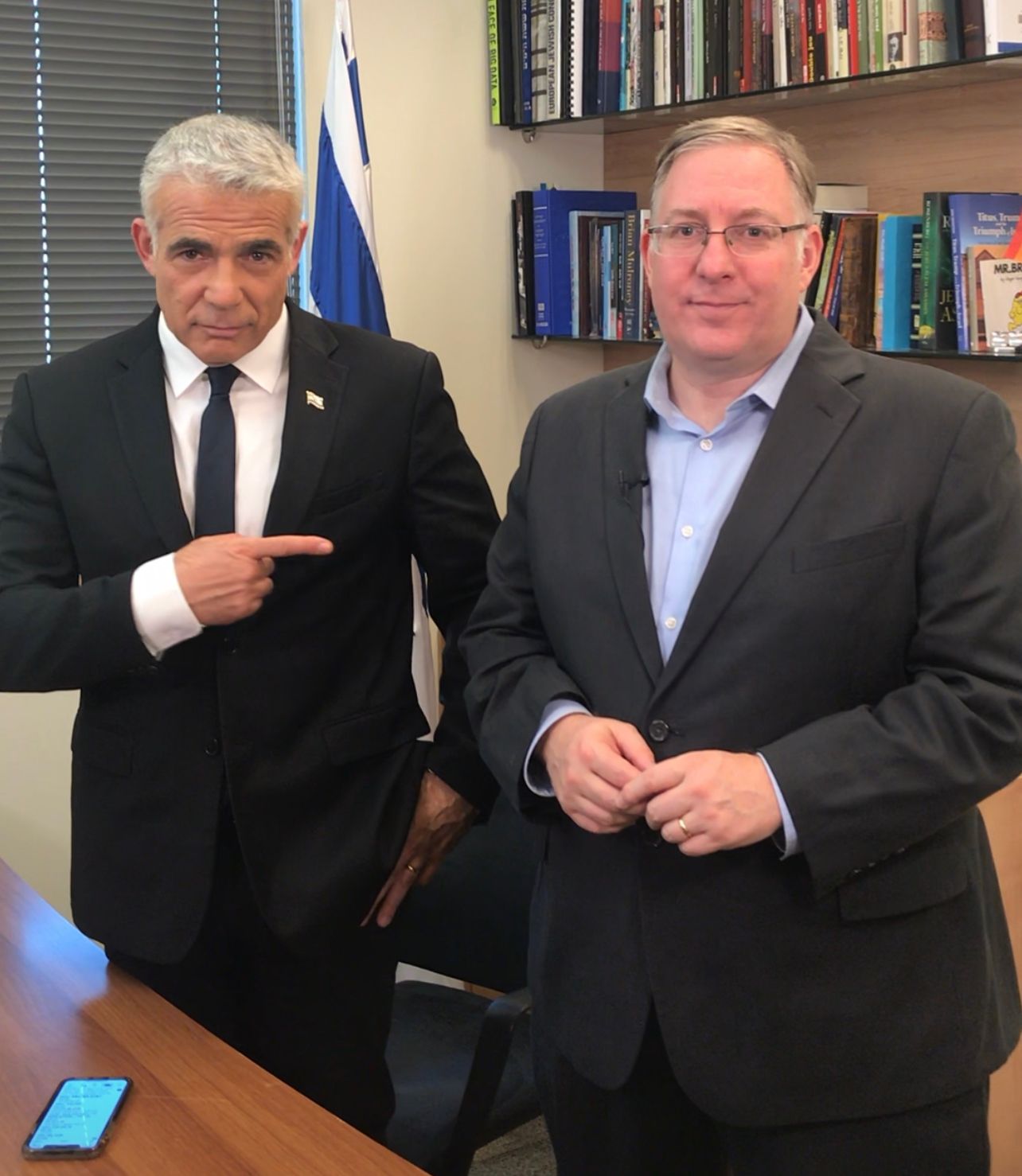 In the end, that government only lasted a year.

But Lapid has reached the top spot.

He has achieved something his father never did.

Something his critics never thought possible.

Lapid’s greatest tests will be how he deals with three issues:

With Iran so close to being able to build their first nuclear bombs, Lapid cannot afford to be soft, much less look soft.

He is not a military man. He served as a journalist in the IDF, not in special forces like Netanyahu and Bennett. 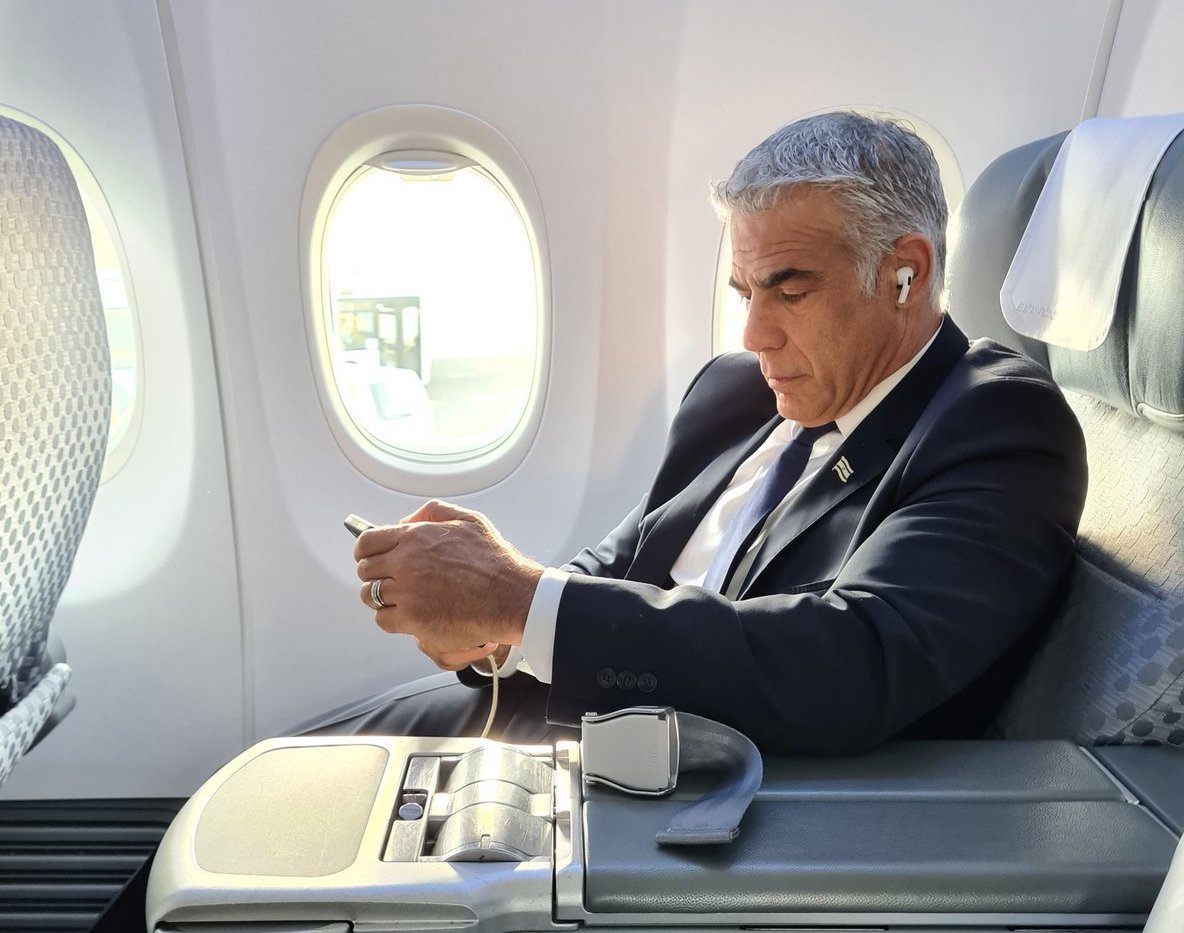 How will Lapid handle the Iran issue when every day counts in preventing Tehran from getting The Bomb?

When Biden comes to Israel next month, it will now be Lapid – not Bennett – welcoming him to the Holy Land.

But will Lapid have the grit to tell Biden that enough is enough when it comes to appeasing Iran?

Clearly, Tehran doesn’t want to cut a diplomatic deal with Washington, no matter how desperate Biden and his team plead with the Iranians.

Lapid needs to persuade Biden to go back to a maximum pressure campaign of crippling economic sanctions and a real, serious, obvious, and credible threat of American and allied military force.

Is Lapid up for the challenge? The stakes could not be higher, and Israeli voters in the fall will judge him on how he handles his few months on the job.

Then there is Saudi Arabia.

Working closely with Biden, could Lapid pull off a diplomatic miracle by persuading the Saudis to agree to a full peace and normalization deal this summer?

That – and persuading Biden to get truly tough on Iran – would not only be good policy but smart politics.

Who is Yair Lapid?

We’re about to find out.