WASHINGTON, D.C.—Ask any political pundit or religious affairs reporter in the U.S. if Donald J. Trump overwhelmingly won Evangelical Christians in 2020, and they will tell you, “of course.”

Except, it isn’t true.

Yet a new study looks more closely at the overall Evangelical vote.

One reason that Biden beat Trump among Evangelicals is this: There is a growing trend towards theological and political liberalism inside the Evangelical movement in the U.S. that has received little, if any, coverage or analysis in the so-called “mainstream” corporate media.

This is particularly true among younger Evangelicals.

What’s more, Evangelicals under the age of 30 are shifting away from the pro-Israel views of their parents and grandparents, a fact that affected the 2020 election but has other long-term consequences, as well.

All week, I’ll be examining different sections of this fascinating new survey of America’s 60 million Evangelicals.

Yesterday, I focused on clear evidence from the survey that Evangelical Christians in the United States love Benjamin “Bibi” Netanyahu, and they are concerned that Netanyahu’s departure from office will harm Israel’s relations with Christians.

Today, let’s focus on the stunning fact that Biden actually won the overall Evangelical vote and how younger Evangelicals view Israel and Biden.

FIRST, WHO CONDUCTED THE STUDY?

The survey is not only fascinating but credible.

Many Evangelicals are understandably suspicious of all polling because all too often they see the extreme bias of polls conducted by “mainstream” corporate media outlets.

But not all public opinion surveys are “fake news.”

This one certainly is not.

Even if you’re not happy with the results – and/or don’t want to believe them – you should be paying close attention.

The study was designed and conducted by Dr. Kirill Bumin and Dr. Motti Inbari, both of whom are experienced and respected professors at the University of North Carolina at Pembroke (UNCP).

It was commissioned by Chosen People Ministries and the Alliance for the Peace of Jerusalem, a coalition of Evangelical scholars, seminary professors, ministry leaders and authors, including myself, who helped found it in 2017.

It was fielded by the Barna Group in July, after Netanyahu left office (but before the very serious tensions between Bibi and former President Donald Trump became known).

Together, the professors and Barna surveyed 1,000 Evangelical or born-again Christians.

HOW DID YOUNGER EVANGELICALS VOTE?

One of the most striking results in the study is how decisively younger Evangelicals broke for Biden.

HOW DO YOUNGER EVANGELICALS VIEW THE ISRAELI-PALESTINIAN CONFLICT?

Another striking result of the survey is that younger Evangelicals are becoming far less supportive of Israel than their parents and grandparents.

At the same time, they are becoming far more supportive of the Palestinian cause than older Evangelicals. 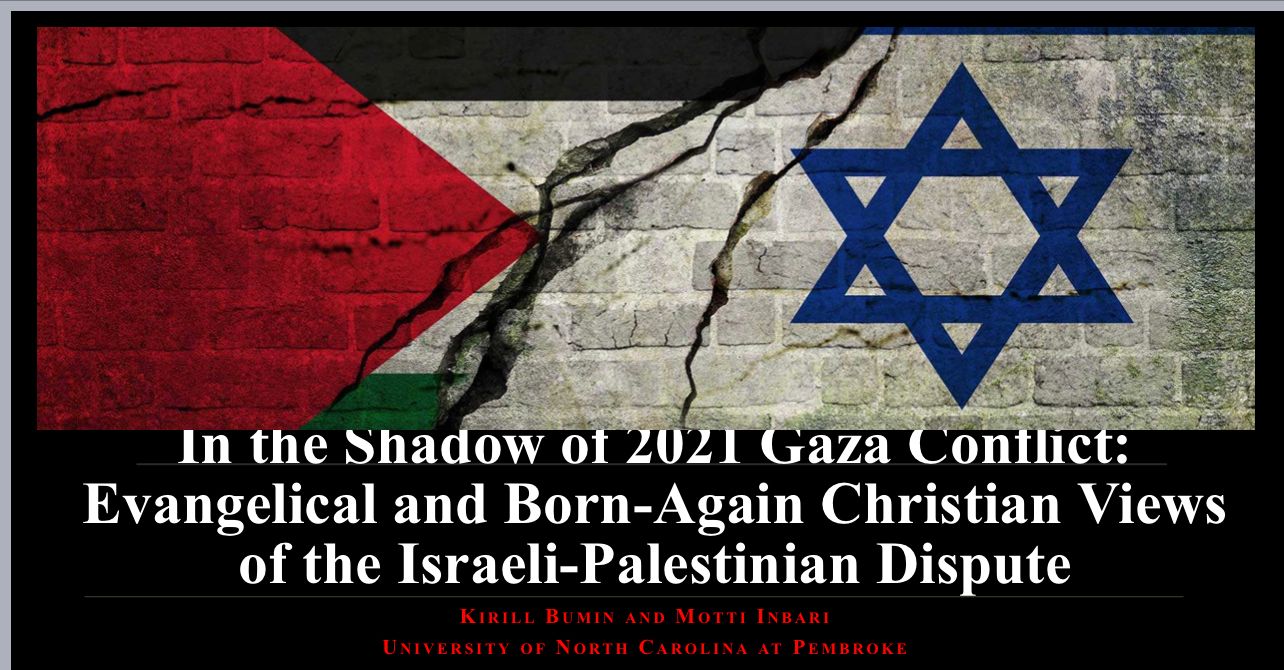 HOW DO YOUNGER EVANGELICALS VIEW THE RECENT GAZA WAR?

These trends notably affect how younger Evangelicals view the rocket war that took place between terrorists in Gaza and Israel in May 2021.

HOW DO YOUNGER EVANGELICALS THINK BIDEN WILL TREAT ISRAEL?

Some Evangelicals under 30 agree, but far fewer than their parents and grandparents.

IDEOLOGY: WHO ARE AMERICAN EVANGELICALS?

This ideological diversity helps explain why:

It also helps explain why:

The rest see themselves as Independents or affiliate with other small political parties.