Marking a tectonic shift in the Israeli political scene, Naftali Bennett has just been voted in as prime minister along with a new government that held steady to accomplish its unifying goal: to remove Benjamin Netanyahu from the seat he has held for 12 years.

But the vote did not even merit a majority – the new government slipped into power by a 60-59 vote underscoring the deep divisions in Israel society.

Immediately following the vote, the lawmakers were required to change seats, with Bennett taking Netanyahu's chair and the former and longest-serving prime minister moving to the head of the opposition seat.

On his way to his new position – and a few hours after a blistering speech in which he tore into Bennett – Netanyahu shook hands with the man who will now take his place.

Bennett was then called to the front of the Knesset where he pledged his oath to serve Israel as prime minister as part of a rotation deal for two years with Yair Lapid, head of the Yesh Atid party, who swore in as alternate-prime minister and foreign minister. Lapid will take over as prime minister after Bennett's two years. 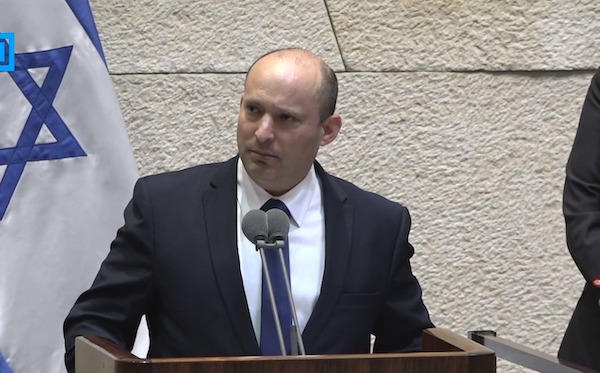 At his first Cabinet meeting already late Sunday night, Bennet declared, “We are at the start of new days” and pledged to “mend the rift in the nation.”

Lapid, sitting next to Bennett, said that “friendship and trust” were going to keep the government in power.

U.S. President Joe Biden was among the first of several world leaders to congratulate Israel’s new prime minister. Biden called Bennett and noted America's "steadfast support for the U.S.-Israel relationship and his unwavering commitment to Israel's security. The two leaders agreed to consult on all matters of regional security, including that of Iran, which Israel deems as an existential threat.

"Thank you Mr. President. I look forward to working with you to strengthen the ties between our two nations," Bennet posted on Twitter. 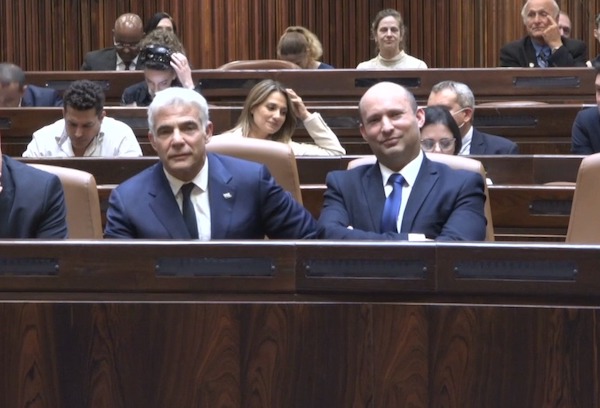 Prior to the vote on the government, the Knesset elected a new Knesset speaker – Mickey Levy of Yesh Atid to replace Likud's Yariv Levin. This is significant since the speaker is from Lapid's party ensuring Yesh Atid's influence in the government despite not holding the prime minister seat for another two years.

One Israeli told ALL ISRAEL NEWS after the vote that the new government is a relief.

"We needed a change after 12 years," she said, noting that she believe Netanyahu's ongoing corruption trial was damaging law and order in the Jewish state.

The celebrations of the evening were matched by rallies against the new government. Competing gatherings at two separate locations showed the range of highly-charged sentiments raging within the Israeli populace: At the Western Wall, hundreds of religious Zionist Jews joined a prayer rally against the new government; Meanwhile hundreds of Israelis celebrated the end of the Netanyahu era in Tel Aviv's Rabin Square, even declaring today a holiday. 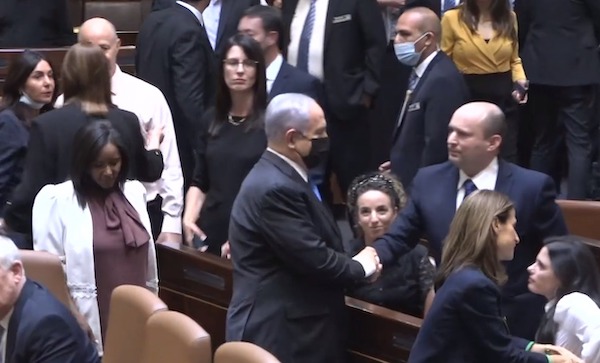 Earlier in the day– to jeers of "traitor," "liar" and even "criminal" – Bennett was heckled by Knesset members as the parliament began officials ceremonies to swear in the new government on Sunday afternoon.

“I am proud of the ability to sit with people with very different opinions,” he said. “At the decisive moment we took responsibility.”

“It is time for responsible leaders ... to stop this madness,” he said speaking of the ongoing cycle of elections over the past two years that failed to result in a stable government.

Israeli media categorized the ceremony as the outer fringe of democracy, rife with disrespect and nearly violent. The harassment of Bennet was so bad that alternate Prime Minister- and Foreign Minister-designate Yair Lapid refused to speak, saying his 86-year-old mother “is ashamed of you and remembers clearly why it is time to replace you,” he told lawmakers.

However, Netanyahu left no doubt who has been the dominant personality in the Israeli political scene over more than a decade.

In a defiant and blistering speech on Sunday afternoon, Prime Minister Benjamin Netanyahu tore into his successor and set the tone for the opposition that he will be leading for the first time after being prime minister in the past 12 years. He undermined the nascent government before it even got sworn in.

Bennett’s speech could barely be heard above the incessant heckling and will likely be remembered for that rather than its content.Bennett started by thanking Netanyahu and his wife Sara Netanyahu: “You both sacrificed a great deal for the State of Israel.”

But he could barely get in a complete sentence. Several Knesset members were forcibly removed by security when they refused to heed calls from the Knesset speaker to be quiet.

Bennett credited Netanyahu with “paving the road” to cooperation an Arab party, Ra’am, whose leader – Mansour Abbas – Netanyahu courted to be in his own government.

“We understand the difficulties and needs of the Arab public,” Bennett said.

Bennett also appealed to the ultra-Orthodox saying his government would represent them as well.

On foreign policy, he said “renewing the nuclear deal is a mistake.”

“Israel will not allow Iran to attain nuclear weapons. Israel is not a party to the deal and will maintain full freedom to act,” he said

A visibly upset and defiant Netanyahu responded during his turn at the podium, recalling his accomplishments such as the millions of COVID vaccines he brought to Israel, strides in foreign policy and the signing of the historic Abraham Accords in addition to his personal sacrifices as a citizen and soldier.

"I almost lost my life several times serving my country," he said.

He said he represents millions of Israeli residents that voted for a right-wing government – and vowed to bring down “this dangerous government.”

He said Bennett does not have the standing or the knowledge to represent Israel in the international arena.

"The prime minister of Israel needs to be able to say 'no' to the president of the United States about things that endanger Israel," he said, slamming his former protege.

Abbas, head of Ra’am – the Arab party that made history by joining the coalition – addressed the Knesset in Arabic and said it’s time to advance Jewish-Arab “dialogue, so that we understand each other and not view each other as enemies.”

“We belong to other nations, to other religions, to other communities. There is something that connects all Israelis and that’s our citizenship,” he said.