B’NEI RAM – The first clue I got that VIP guests were coming to Hananya Naftali’s wedding came Sunday afternoon.

That’s when he texted me to be sure that my wife, Lynn, and I brought our Israeli ID’s to his wedding ceremony a few hours later.

When Lynn and I arrived at the “Nesya” wedding hall just south of Tel Aviv for the 7:00pm reception and the 8:00pm “chuppah ceremony,” we found an array of police cars with their flashing blue lights and a phalanx of plainclothes security agents.

In addition to showing our ID’s, we were asked questions about who we were, where we lived and how we knew the bride and groom.

Then, as if boarding a plane, we had to put all of our phones and other metal objects through an X-ray machine.

And then pass through a magnetometer.

Clearly, this wasn’t going to be an ordinary wedding. 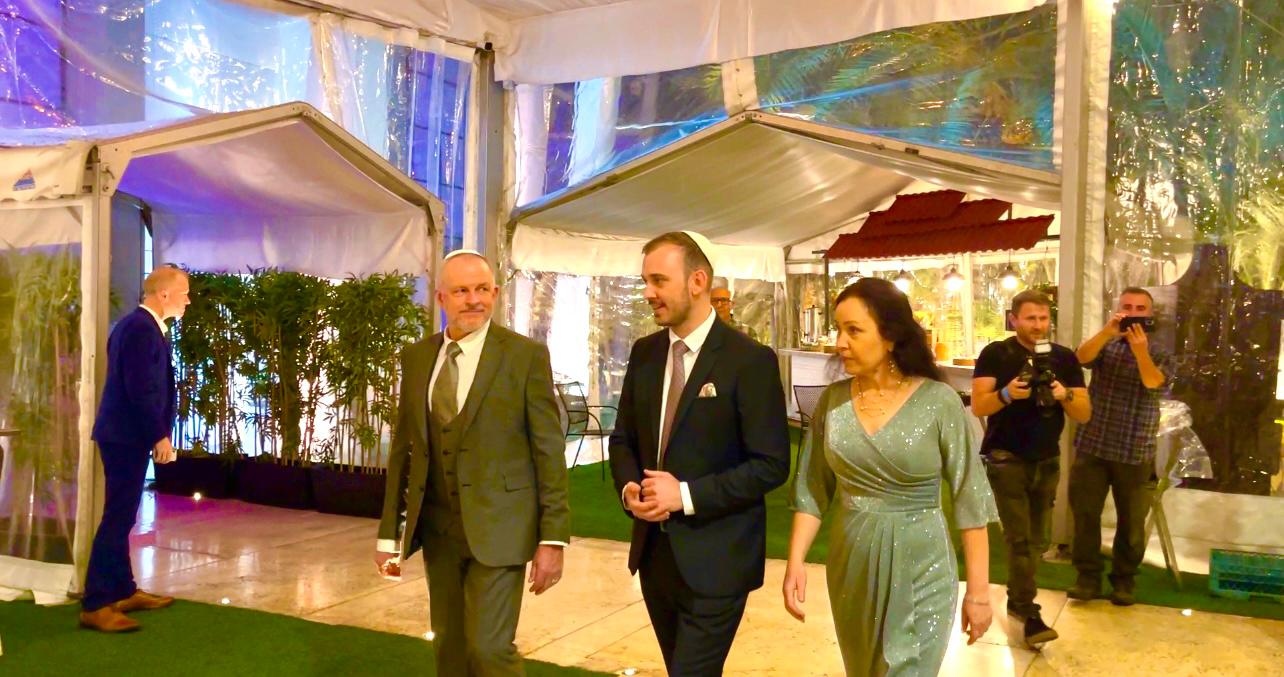 Hananya walking down the aisle with his parents (Photo: ALL ISRAEL NEWS)

Not only was it a gorgeous and glitzy affair – followed by fun and pulsating music and a spirited dance floor – but the guests came from a wide and diverse swatch of Israeli politics and media.

And then, after the wedding ceremony itself and well into the dinner and dancing afterwards, Israeli Prime Minister Benjamin “Bibi” Netanyahu and his wife, Sara, arrived.

They may have been surrounded by bodyguards, but they were beaming and clearly glad to be there.

Speaking in English to the crowd of enthusiastic well-wishers, Netanyahu praised Hananya’s many talents.

Then he wished the couple many blessings as they go on to “produce much content” in the future.

It was a sweet and moving moment.

And a sign of how remarkably close the Netanyahus have become to Hananya and his beautiful bride, India, and vice versa.

After all, it’s not every day that an Israeli prime minister shows up at your friend’s wedding.

Then again, Hananya and India are not your average Israelis.

WHO ARE HANANYA AND INDIA?

I first met Hananya in 2018 after the Jerusalem Post published a front-page, top-of-the-fold story about him.

Until then, I’d never heard of him, but Netanyahu’s team was calling him “a superstar.”

Sure enough, I quickly learned that Hananya was incredibly talented, articulate and popular, having built a massive social media following from scratch.

Through a mutual friend, I reached out to him and told that I’d love to connect.

I, too, had once worked for Bibi – in a junior capacity and only for a few months – and that I was excited for him and praying for him as he shifted into the rough-and-tumble game of Israeli politics.

Soon, we found time to get together.

It was the beginning of an enduring friendship.

To the credit of Netanyahu and his team, they chose right with Hananya.

And though he was young – just in his mid-20s then – they let him do what he does best: help the prime minister speak to Israelis and the world through the power of social media.

In the years that followed, it was encouraging to see his relationship with Netanyahu, Sara and the senior team grow and deepen.

Hananya is a consummate professional. That’s why his work – and his kind, cheerful, encouraging manner – has been appreciated by modern Israel’s longest-serving leader.

What a joy, then, to see Hananya fall in love with another up-and-coming social media personality.

India Persaud was born and raised in the United States.

Her father is a U.S. military veteran whose family emigrated to the States from the subcontinent of India.

Her mother is a Jewish American.

In time, India came to Israel to better understand her Jewish roots and explore the Promised Land.

Passionate about media, she launched her own YouTube channel, India International, sharing with others the people, places, food, traditions and destinations she loves.

In time, she was hired by i24 News, Israel’s English language cable news channel, who gave her a show.

Lynn and I were honored to be included in such a lovely and special evening.

We’re praying for this sweet couple as they embark on their lives together and continue to serve our country.

And we’re grateful to the prime minister and his wife for traveling more than an hour from Jerusalem – on an otherwise very eventful day and after an important Cabinet meeting – to attend the wedding of a staffer and his bride.

It may not happen every day.

But it certainly added to a wonderful wedding that we’ll never forget.