Israeli Foreign Minister Gabi Ashkenazi, who hosted his European counterparts, showed them a building in the central Israeli city of Petah Tikva, which had been partly damaged by rockets from Gaza.

“I would like to thank the German government, which supported Israel from the start of this round of fighting, condemned Hamas terror, and emphasized Israel’s right to defend itself and its civilians,” said Ashkenazi.

“Israel has the right to defend itself,” declared Maas.

The German foreign minister also commented on the situation in Gaza.

“We are following with concern the humanitarian situation in Gaza, and are aware of Israel’s efforts to send in humanitarian aid to residents of Gaza,” he said. 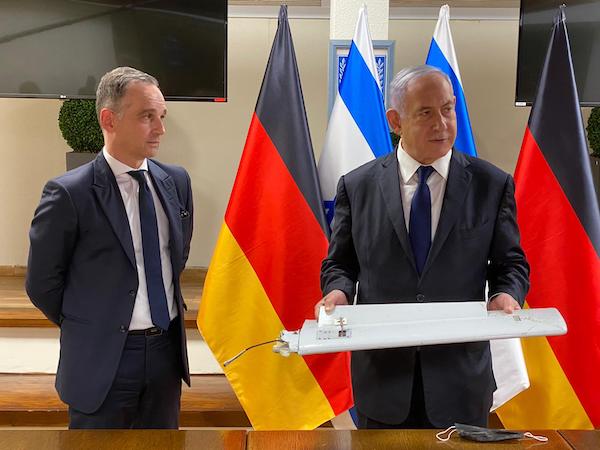 Prime Minister Benjamin Netanyahu meets with German Foreign Minister Heiko Maas and shows him an Iranian UAV that had been downed in the Beit Shean area, May 20, 2021 (Photo: Koby Gideon/GPO)

In Europe, where there is frequent division between EU member states on the issues of Israel and the Middle East, the Czech Republic has emerged as one of Israel’s staunchest European supporters. The Czech foreign minister stressed that his visit to Israel was “first and foremost, a demonstration of the Czech Republic’s unwavering support for Israel in these difficult times. Israel has every right to defend its citizens against indiscriminate terror.”

An emotional Kulhánek also commented on the destruction that he witnessed in Petah Tikva.

“I am speechless after I witnessed the destruction and terror that Israel has experienced,” he said.

“We are true friends and we came here to show the strength of the friendship between the countries. Hamas fire must stop. Israel has the full right to defend itself,” Korcok declared.

📸#Czech FM @JakubKulhanek & #Slovakia's FM @IvanKorcok visited the site of a direct hit of a Hamas rocket in Petah Tikva, following the visit of #Germany's FM @HeikoMaas to the site.

Israel, however, remains a divisive issue in the European Union.

Sweden’s former Prime Minister Carl Bildt recently compared Israeli police to Nazis during clashes at the Temple Mount. Bildt has a history of making hostile statements towards Israel. After facing criticism for the insensitive comparison, Bildt corrected his original comparison by claiming that "it would probably have been better" to compare the Israeli police to ISIS. In other words, the former prime minister of a liberal European democracy demonized the democratic State of Israel by comparing it to the most ruthless terrorist organization in the 21st century.

While Bildt no longer represents Sweden in an official capacity, Sweden remains one of Israel’s harshest critics in the EU. Sweden, which has a large and growing Muslim population, is also struggling with growing levels of anti-Semitism, especially in large cities with high proportions of residents with Middle Eastern origins, such as Malmoe.

France is a major European power and another frequent critic of Israel. Prior to the Gaza ceasefire, France clashed with the United States in the United Nations over the conflict between Hamas and Israel.

Despite realizing that the U.S. would veto it, France initiated a draft resolution on ending the conflict on Wednesday.

"The shooting must stop, the time has come for a ceasefire and the UN Security Council must take up the issue," France demanded without differentiating between Hamas’ unprovoked aggression and Israel’s legitimate right of self-defense.