Just when pundits began speculating that Hamas had weakened or at least had tired of the current round of fighting, an eight-hour lull was broken by rocket and anti-tank fire at southern Israel this morning.

And since then, it didn't stop.

Rocket fire continued throughout most of the day into the evening, first with short-range rockets blanketing the region north and east of the Gaza Strip, and later with a massive barrage at Ashkelon, Ashdod and Beersheva.

A total of 341 rockets were fired during the day and a total of 4,400 rockets since May 10. The heaviest round of fire since Operation Guardian of the Walls began was 140 rockets fired in 20 minutes.

And despite talks that Israel and Hamas are moving toward a ceasefire as early as tomorrow, Palestinians around the West Bank and Jerusalem were calling for a Day of Rage on Friday.

The death toll stands at 12 Israelis and more than 200 Palestinians, according to the Hamas-run Health Ministry in Gaza. Today, several buildings in Israel were hit directly and one person was reported injured. The IDF said it struck 30 rocket launching positions in Gaza today. 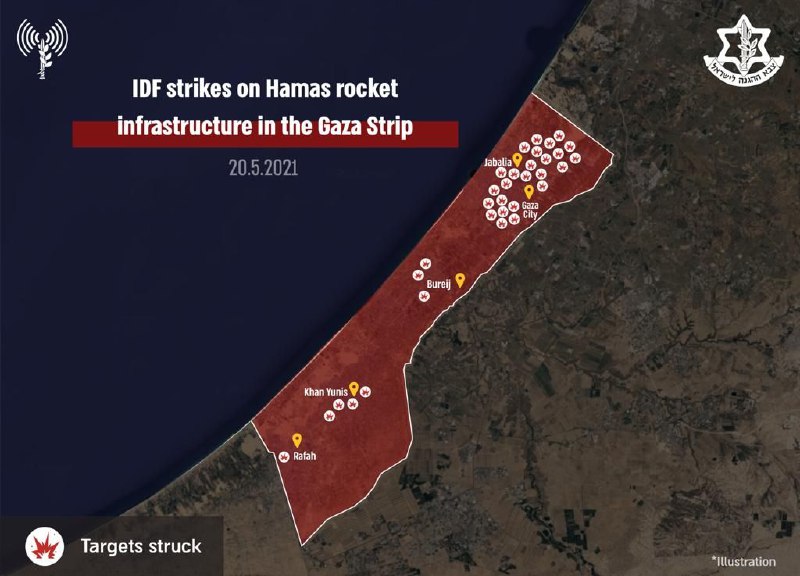 In the morning, a potentially fatal attack was avoided – nothing short of a miracle – when the Al-Qassam Brigades fired an ant-tank missile and hit a bus in Zikim. The bus driver said the soldiers just got off the bus and he followed – 15 seconds before impact. The driver was lightly injured.

Prime Minister Benjamin Netanyahu said the operation was going to continue until Israel met its goals. Netanyahu also said today that the drone shot down by Israel near Jordanian border on Tuesday was Iranian.

“While we were busy fighting, a few days ago, Iran sent an armed drone into Israel from Iraq or Syria,” Netanyahu said. “Iranian forces launched an armed drone, which our forces shot down at the border between Israel and Jordan."

In just 5 days, we neutralized it: pic.twitter.com/aobcEJcg4t

According to several media reports late Thursday night, the Israeli Cabinet and Hamas approved a ceasefire tomorrow. Nevertheless, residents of the South were told tonight to stay in their shelters. The Wall Street Journal noted that Islamic Jihad is a “wild card” and might continue launching rocket fire on its own.

Psaki said that Biden’s demands for de-escalation, were reflected through operations on the ground.

U.S. Secretary of State Antony Blinken said he spoke with Israel Foreign Minister Gabi Ashkenazi “about efforts to end the violence in Israel and the West Bank and Gaza, which has claimed the lives of Israeli and Palestinian civilians including children.”

“The U.S. expects to see de-escalation on the path to a ceasefire,” Blinken wrote on Twitter.

“This is organized state terror conducted by Israel. These are war crimes punishable under international law. We shall not hesitate to pursue those who commit such crimes before the International Criminal Court,” Abbas said in an address to the legislative body of the Arab League.

The ICC is investigating both Israel and Hamas for war crimes committed during the last major war between the two in 2014.