DES MOINES, IOWA — Israel is experiencing a new and troubling wave of infections, mostly from the Delta variant of the COVID-19 virus.

New cases are spiking, even though most Israelis have been fully vaccinated with the Pfizer vaccine, or have already recovered from COVID.

“The Delta variant is surging globally,” Prime Minister Naftali Bennett said Friday. “On the one hand the vaccines remain effective against the virus, and so we are making sure we have the necessary stocks. But vaccines alone are not enough."

“We don’t know the precise extent to which the vaccine helps, but it is significantly less effective against Delta than against the previous strains,” Bennett added. “We all hope to see a slowdown in the spread of infection, but the truth of the matter is that there isn’t a slowdown right now – not in Israel and not around the world.”

The Israeli Health Ministry now reports that “the Pfizer vaccine’s effectiveness in preventing symptomatic COVID-19 has dropped by some 30 percent to 64%, given the spread of the Delta variant,” according to the Times of Israel. “The data shows that during May, when the strain was less prevalent, the vaccine was 94.3% effective.”

“The Delta variant, which is believed to be twice as contagious as the original strain of COVID-19, is thought to be responsible for 90% of new cases in Israel over the past two weeks.”

It turns out, I am one of those Israelis that the prime minister is talking about.

Before flying from Tel Aviv to the U.S. three weeks ago to begin several months of speeches, media interviews, and business meetings – as well as attend the wedding of one of my sons, and have some vacation time with my family – I was given a PCR test at Ben-Gurion International Airport.

The test confirmed that I did not have COVID, and thus I was cleared to fly.

But somewhere here in the States, the situation changed.

When I landed here in the capital of Iowa on Wednesday afternoon, I thought I had picked up a slight cold.

Within a few hours, I thought I was suffering a terrible sinus infection – runny nose, aches, slight fever and an intense sinus headache.

By evening, I was in an urgent care facility.

Not only was I feeling sicker by the hour, but I was receiving texts from more than 20 members of my extended family and dear friends who had just been at my son’s wedding that they were increasingly ill and had just been diagnosed with COVID-19, including my 81-year-old mother and my 82-year-old mother-in-law.

That seemed impossible to me at first. Most of our family and friends have been vaccinated.

I was fully vaccinated in Israel several months ago.

But out of an abundance of caution, I informed the urgent care physician and nurses of my own symptoms and what was happening to my family and friends.

They conducted a PCR test and sent me back to my hotel room to temporarily quarantine until I could get my results.

On Thursday, I called Bob Vander Plaats – the organizer of The Family Leader Summit where I was scheduled to speak here in Des Moines. Apologizing profusely, I explained what was happening and that there was a very real chance I was not going to be able to attend.

Bob is the president of The Family Leader, an Evangelical Christian organization here in Iowa focused on advocating pro-life, pro-family, pro-growth, pro-Israel policies and legislation, and educating and mobilizing Christians to vote for local, state and federal candidates who will advance our Evangelical values and agenda.

Bob is also a member of the ALL ISRAEL NEWS advisory board and had invited me to brief the summit attendees on my forthcoming new book, "ENEMIES AND ALLIES: An Unforgettable Journey Inside the Fast-Moving & Immensely Turbulent Modern Middle East." 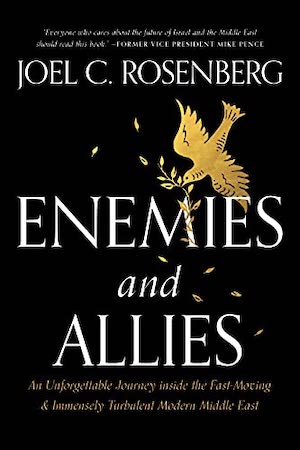 I was very much looking forward to doing so, and answering his questions on stage.

But for now I had to stay in bed, cancel planned phone calls and other meetings and sleep almost nonstop.

The urgent care physician had not prescribed me any medications. In fact, he was fairly certain I did not have COVID, or a sinus infection, just a “viral infection” that he said “should pass in a few days.”

That did not sound right to me, so I contacted a dear friend in Virginia who is a great physician and medical advisor to me when I travel all over the world.

He and his wife had been at my son’s wedding and at a beach retreat in North Carolina that many of us had attended just before the wedding. He was in touch with all the other guests that had contracted COVID, and was pretty sure by that point that I had COVID as well.

He prescribed some medication to deal with the symptoms and especially to reduce the sinus pressure. My son, Jacob, who is traveling with me and feeling just fine, graciously picked up the prescriptions and a little bit of food for me.

Frustrated that I had not yet gotten the official test results from urgent care, I also took an at-home rapid test.

Within 15 minutes, I had initial confirmation that I had COVID.

When I woke up Friday morning, the official results came in confirming what I already knew.

I called Bob, filled him in and apologized again that I could not attend the summit.

Then I contacted former Vice President Mike Pence, former Secretary of State Mike Pompeo, Iowa Governor Kim Reynolds and several of the other summit speakers to let them know what was happening with me and why I would not be joining them.

They were all very gracious and promised to pray for my quick and full recovery.

I spent the day watching all the speeches and panel discussions via a private video link that Bob made available to me, and for which I was very grateful.

Then I realized I had a new problem: I cannot legally board a plane.

Which means I could not fly back to Northern Virginia where Lynn and our family is quarantining with her mom.

I’m not reporting any of this to make a case for or against vaccines.

That is the subject of a huge global debate, and people have strong views on both sides.

I’m just reporting what is happening to me.

The good news is that I am on the mend.

My energy is slowly coming back. My sinuses have mostly cleared up. I have a ways to go, to be sure, to be fully healthy.

Those are all good things, and I am grateful to the Lord, to my friends who are praying for me, and to my dear doctor friend in Virginia.

Perhaps the vaccine prevented me from getting far sicker. I hope so. But I’ll leave the science to others.

I’ll certainly keep you posted on my progress, and as my strength increases, I will report on what I saw and heard at this summit here in the American heartland and what the speakers had to say about Israel and trend lines in the Middle East.