Denmark’s Prime Minister Mette Frederiksen and Austrian Chancellor Sebastian Kurz are coming to Israel this week to discuss vaccination cooperation with the Israeli government including research and production of the vaccine and possible purchases of surplus doses from Israel.

Ahead of the visit, scheduled for March 4, Frederiksen expressed a strong interest in forming a vaccine alliance with Israel and Austria. The Danish leader is reportedly also interested in buying surplus vaccines from Israel. The two European leaders will arrive to an Israel “hermetically” closed to foreign citizens, and which has even left thousands of Israelis stranded abroad.

Denmark and Austria have been among the most successful European countries in containing the spread of the coronavirus. Their interest in close cooperation with Israel signals a vote of confidence for Jerusalem’s vaccination effort against the pandemic. With a population of almost 6 million people, compared to Israel’s 9 million residents, Denmark has a mortality rate of 407 individuals per million people, compared to 626 in Israel.

In addition, there are currently fewer than 7,000 active cases in Denmark compared to almost 40,000 in Israel. With a population similar in size to Israel, Austria has had a higher mortality rate than Israel, but currently only has half the number of active virus cases.

Ahead of the visit to Israel, Kurz confirmed Austria’s close cooperation with Denmark and Israel.

“We have been in close contact with our partners Denmark and Israel,” said the Austrian leader. While the longer-term goal of the cooperation is research and COVID-19 drug production, Kurz stressed that the first priority is to speed up the procurement of vaccines. The vaccination programs in most European countries are lagging far behind Israel due to considerable bureaucracy within the European Union. Echoing the optimism of Netanyahu, Kurz estimated that Austria would “return to normal in the summer.”

“One of the partners that I have much confidence in is Israel, which is currently leading in vaccinations,” Frederiksen said. 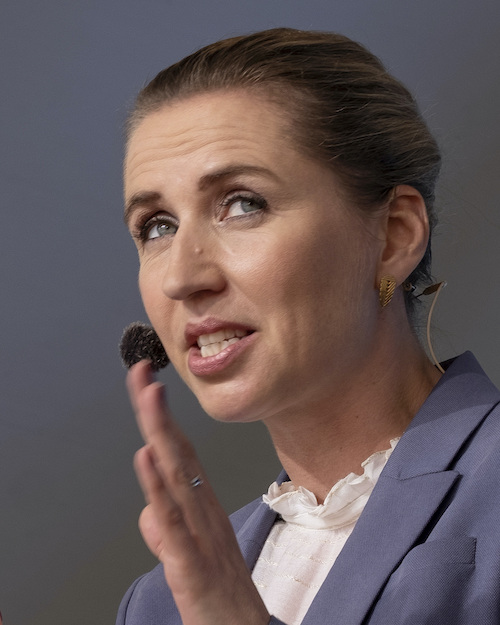 There are good reasons for the Danish and Austrian leaders to cooperate with Israel. Praising the Jewish state’s world-leading COVID-19 vaccination program, Pfizer ‘s CEO recently called Israel the “lab” for his company’s vaccine. Over half of Israel’s adult population has so far received at least one vaccination dose, by far the largest proportion in the world. In addition, Netanyahu has reportedly already ordered another 36 million vaccination doses for Israel’s approximately 9 million residents. Netanyahu said the different COVID mutations will eventually require continuous revaccination efforts which is why he wants to stock up for another two rounds of national vaccinations in the coming 12 months.

The Danish prime minister appears to embrace the view that the fight against COVID is a long-term effort without short-term solutions.

“We could very well be in a situation, where we are not only vaccinating, but where we need revaccination. Maybe once a year. Who knows, maybe even more frequently,” Frederiksen said.