It appears that Benjamin Netanyahu has a clear path to forming a coalition – and not merely a shaky one-seat majority, but a government with a substantial two to nine seats above the halfway mark depending on the final outcome.

However, the star of the 2022 election is indisputably Itamar Ben Gvir – the “monster phenomena” of the election, as one analyst put it. And Ben Gvir is not even the head of the Religious Zionism slate which surged to No. 3 in the Knesset. 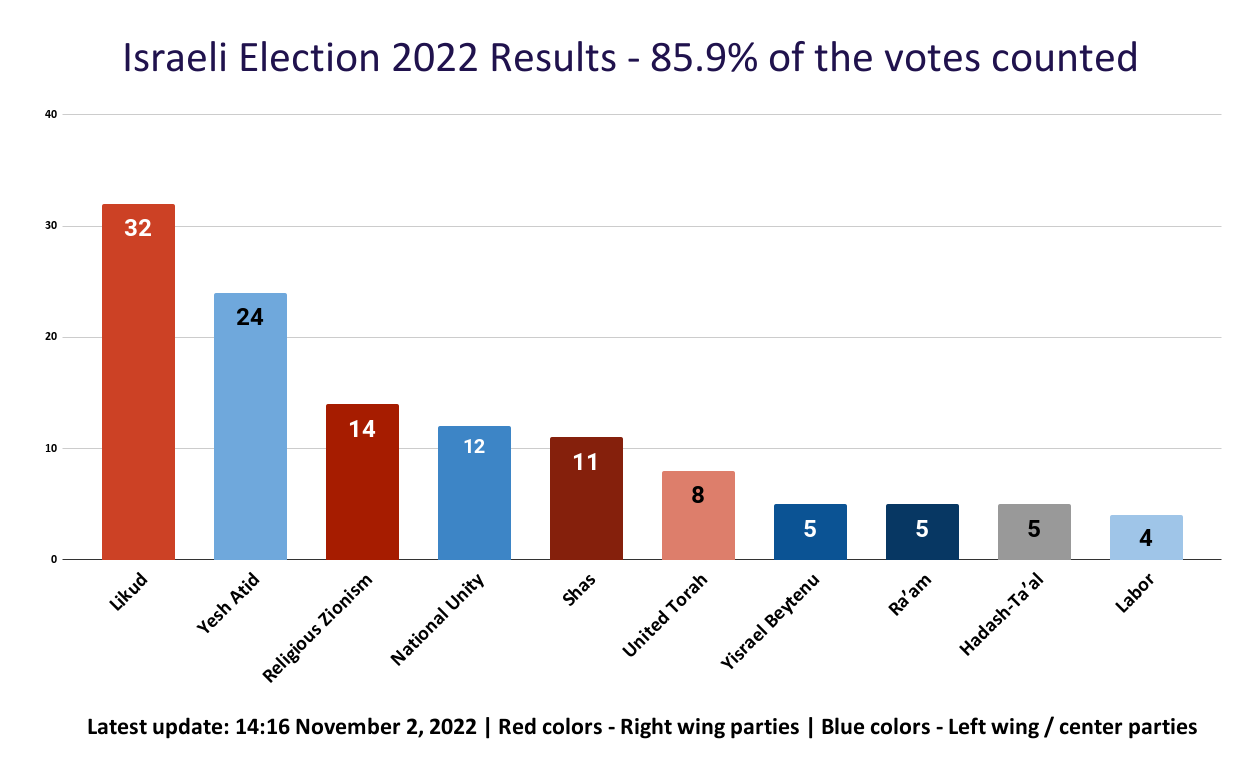 But the spotlight of all Israel is entirely on him at the moment.

While in the last four elections “Anyone but Bibi” was an adequate slogan using Netanyahu’s common nickname, Ben Gvir offered a clear message, political analyst Aviv Bushinsky said during a MediaCentral briefing on Wednesday.

“This is the main issue of the elections: People from even the Center and Left suddenly saw (Ben Gvir) as their messiah,” Bushinsky said. “Itamar Ben Gvir – out of the entire political parties in the Knesset – had a clear message. You can argue whether it is right… but many people, mainly young people, adhered to him because it was clear.”

Ben Gvir galvanized right-wing support and drew votes from Likud, the ultra-Orthodox parties and even center and left-wing parties. He addressed the lack of internal security, capitalized on the current government’s reliance on an Arab party in the coalition and a feeling among Israelis that they are losing their national pride, Bushinsky said.

This ascent up the political ladder came while other core right wingers including Avigdor Liberman, Gideon Sa’ar and Naftali Bennett were stuck on the “anyone but Bibi” message. Meanwhile, the polished and experienced slate presented by Defense Minister Benny Gantz – the National Unity party – did not offer a compelling counter message either.

The Ben Gvir phenomenon is what fueled more Israelis to vote yesterday than in the previous four elections, just when apathy and disillusionment was expected to have gripped the electorate. Bushinsky, who previously served as a media advisor to Netanyahu, said the left’s undermining of and a “patronizing” approach to the right wing fueled the turnout.

Another analyst, Gayil Talshir, said the rise of the “extreme, right party, Religious Zionism, as the third largest party of Israeli politics is so crucial.”

“It has never been the case that such a powerful extreme party was a dominant player,” she said.

Talshir, an expert in political science and previous head of the Center for Senior Training at the School of Public Policy and Government at the Hebrew University of Jerusalem, called Ben Gvir and Religious Zionism “a creation of Benjamin Netanyahu.”

This cadre of far-right Orthodox Jews is now the third largest party and expected to be Netanyahu’s kingmaker in his return to the prime minister seat.

Netanyahu strategically coalesced the parties that will support him – not just his own Likud. In addition to Religious Zionism, the ultra-Orthodox parties Shas and United Torah Judaism have also gained a significant number of seats.

Meanwhile the left and center under current Prime Minister Yair Lapid failed to unite the left-wing parties Labor and Meretz in a vote-sharing agreement and get the Arab parties to run together.

Religious Zionism surged from only six seats to a projected 14 – taking them from the fringe of society to a secure mainstream.

With the rise in terrorism over the past few months, Ben Gvir attracted much attention with his strong stance on death penalty for Arabs and even joining protests at certain flash points.

The left-wing Meretz party may not cross the threshold and the Arab parties will have a combined eight seats, subject to a final outcome.

This will likely hand Netanyahu a commanding coalition.