JERUSALEM—Exactly a year ago, the Israeli Knesset ratified the Abraham Accords peace and normalization treaty signed with the United Arab Emirates and the Kingdom of Bahrain.

Last night, three American architects of the groundbreaking and historic agreements – former U.S. Ambassador to Israel David Friedman, former senior White House advisor Jared Kushner and former Secretary of State and CIA Director Mike Pompeo – gathered at the new Museum of Tolerance in Jerusalem to celebrate the achievement and discuss how to build upon and expand it.

Kushner was the keynote speaker at a special Knesset event in the afternoon that ALL ISRAEL NEWS reported on here.

Kushner, and his wife Ivanka Trump, attended the 6 p.m. reception for the evening gala, marking the grand opening of the new Friedman Center for Peace Through Strength, then headed back to the airport to return to the U.S.

The main event of the evening, which began around 8 p.m., were addresses by Friedman and Pompeo, and a 30-minute sneak preview of a fascinating documentary film produced by Friedman on the origins and significance of the Abraham Accords.

The multi-part film series will soon air on the TBN Networks, a Christian series of TV channels seen in the U.S. and around the globe. (ALL ISRAEL NEWS will report more on that soon.)

What I want to highlight here is Friedman’s remarks.

Taking the stage to a thunderous standing ovation, Friedman – an Orthodox Jewish New Yorker who served as one of President Trump’s most-trusted Middle East advisors and peace strategists – explained why he wants his Center to encourage far more Muslims to come visit Jerusalem and experience the holy sites so important to their religion.

In a particularly moving portion of his message, Friedman explained why the Hebrew prophet Isaiah’s vision for peace – and passion for all nations to come to Jerusalem – will animate the work of his new center.

Then, with great humor and high praise, Friedman presented Pompeo – a devout and outspoken Evangelical Christian – with his center’s inaugural “Peace Through Strength Award” for diplomatic courage and compassion. 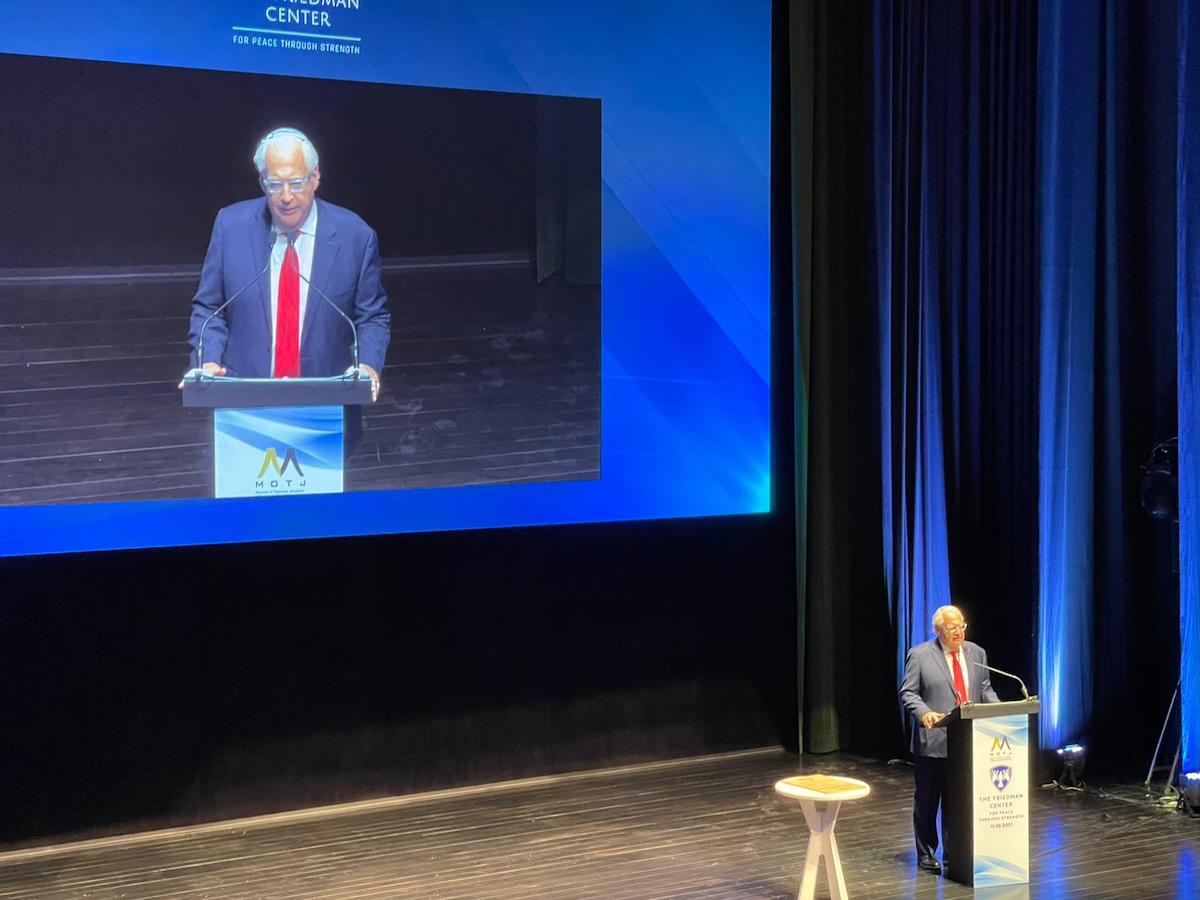 In the biggest laugh line of the night, Friedman quipped, “Mike, if you were single, 30 years younger, and Jewish, you could be a perfect match for my youngest daughter.”

The line brought down the house.

Here is a transcript of Friedman’s remarks – I highly encourage you to read it in full.

It is with deep gratitude, and enormous excitement, that I welcome all of you to the launch of The Friedman Center.

We are right here in Jerusalem, of course, the eternal capital of Israel, on opening night at the Museum of Tolerance.

The Friedman Center, will open its doors to heads of state, lawmakers, government leaders, business leaders, and young people around the world with an emphasis on the Arab world.

We will help to present Jerusalem to the Muslim world, and to help to encourage [and] facilitate tourism to the Al Aqsa Mosque, the third holiest site in Islam. 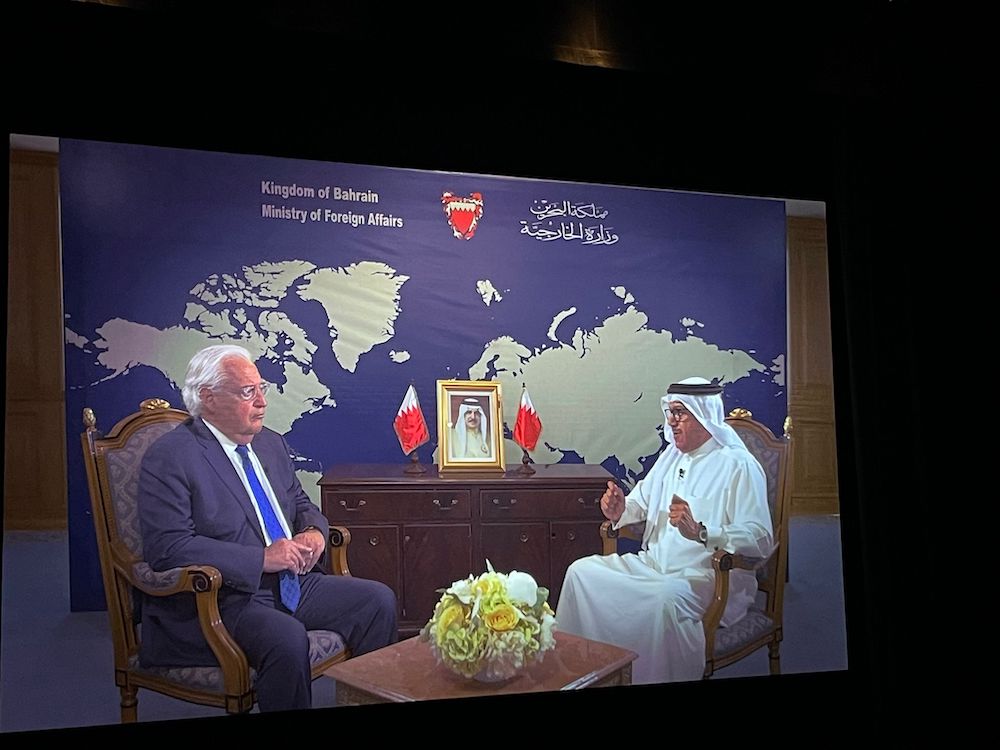 Many in the Muslim world understand Jerusalem totally through the prism of ancient conflicts and false rumors.

Through the Abraham Accords – hopefully to be joined in the future by many more [Arab country] partners – we will work to bring Muslims to Jerusalem, to see it for themselves.

To see the extraordinary care – certainly not perfect, but extraordinary nonetheless that Israel takes to safeguard the holy sites in Islam, including the Al Aqsa Mosque and other sites holy in Islam. [applause]

There are about two billion Muslims in the world, and only a tiny, tiny, tiny fraction have ever visited Jerusalem.

Their perception of Jerusalem comes only from their local media, which often has been, to put it charitably, less than fair.

To bring people of the Muslim faith to Jerusalem in meaningful numbers can truly change the calculus and the perception of Israel throughout the world.

And Muslim tourism, just so you know, was something that was a significant component of President Trump's “Vision For Peace” that we issued in January of 2020 and that was enthusiastically endorsed by the Israeli government. 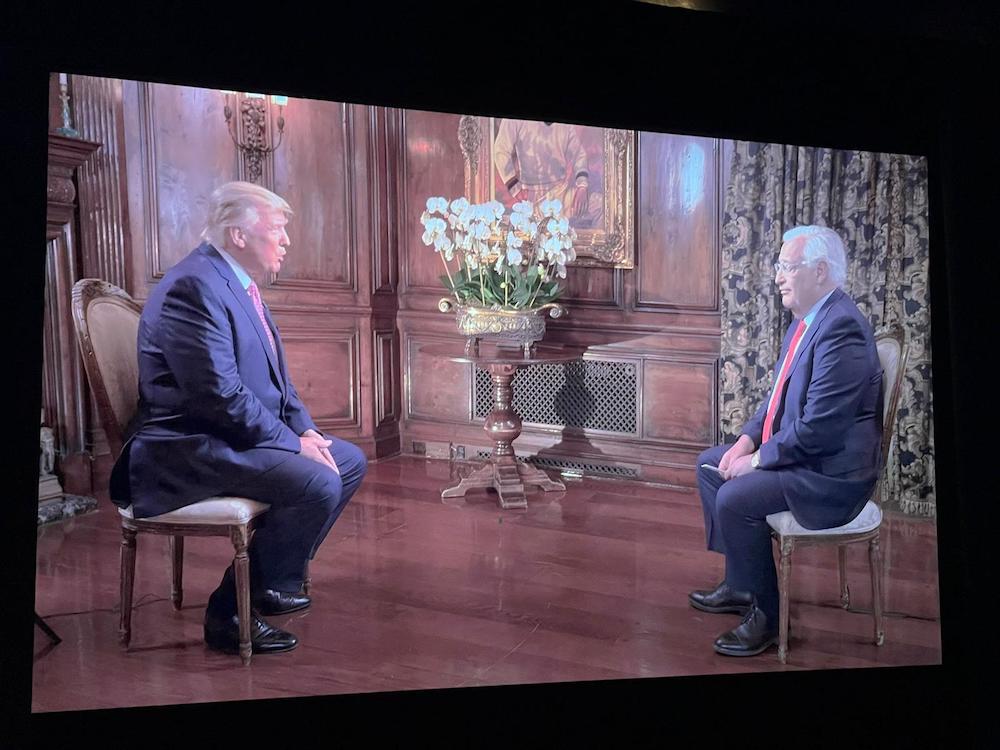 We are on the cusp.

We are on the cusp of ending the Arab Israeli conflict and changing the Middle East for the next 100 years. [applause]

It’s all based on a simple premise: Israel can and should be the solution, not the problem, within the region. [applause]

A solution for scientists.

A solution for technology.

A solution for health care.

A solution for commerce.

A solution for regional security.

A solution for religious tolerance.

And, of course, a solution for peace.

Isaiah was recognized as a prophet in all the Abrahamic faiths.

The paradigmatic vision of peace that adorns the United Nations [comes from Isaiah]: “And they will beat their swords into plowshares, and their spears into pruning knives. Nation will not lift up a sword against nation, and never again will they learn war.” (Isaiah 2:4)

Isaiah also explains how he sees that vision occurring.

All the nations of the world will come to Jerusalem, where God will resolve their differences.

The road to peace goes through Jerusalem, says the prophet Isaiah.

Indeed, the name Jerusalem itself means city of peace.

The Friedman Center will work to actualize Isaiah's vision and to help make Jerusalem worthy of its name.

As you will observe in the film that will premiere shortly, the key to the Abraham Accords was the trust created among a small group of people.

The Friedman Center is committed to expanding that mutual trust from a group of people to a group of nations – and the essential component of trust within this region is mutual respect and religious tolerance. 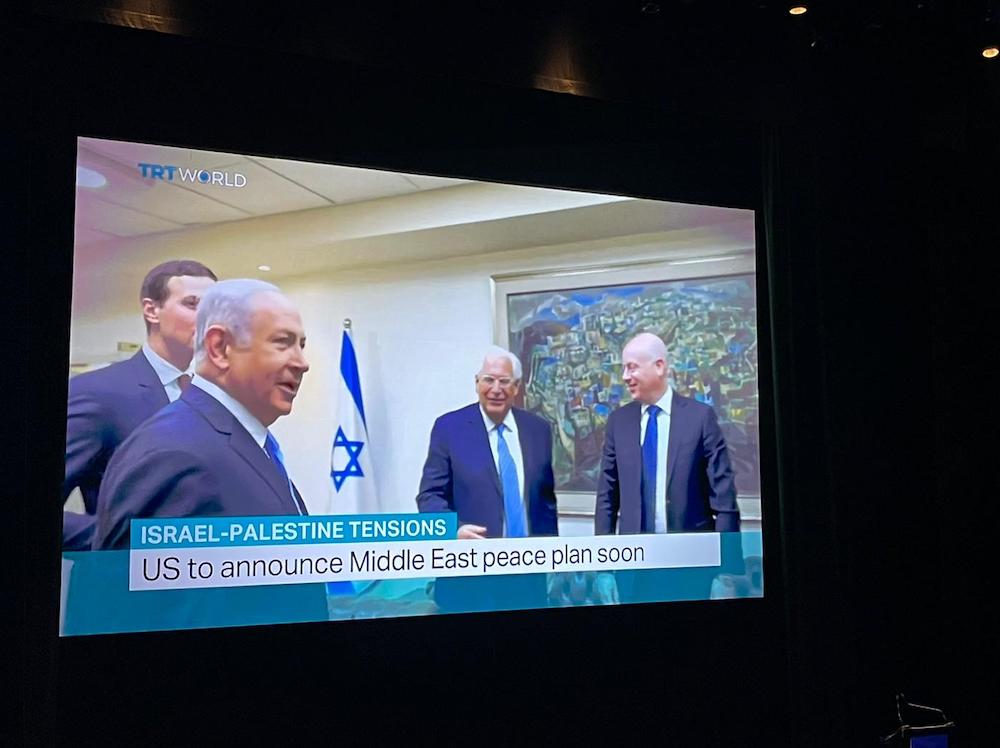 And what a great place to begin to fortify that trust and tolerance is the right here in the Museum of Tolerance in Jerusalem.

With trust, there are no limits.

With trust, we can, and we will, change the world.

The Friedman Center for Peace Through Strength takes on this task with many partners of goodwill.

One key partner in our efforts is here this evening.

No one I know presents a better example of standing for peace through strength than our inaugural guest of honor, Secretary of State Mike Pompeo. [applause]

No Secretary of State has projected America's values to the world like Mike Pompeo.

No Secretary of State has contributed more to a just and more peaceful world than Mike Pompeo.

No Secretary of State has more resolutely stood with Israel or further advanced the U.S.-Israel relationship than Mike Pompeo. [applause]

You probably know this already, but Mike Pompeo holds the single best resume in the entire world.

A graduate of Harvard Law School

A member of Congress who never lost an election – and I think never will.

The Director of the Central Intelligence Agency

And, of course, the Secretary of State [applause]

No human being can replicate his life experience.

Mike, if you were single, 30 years younger, and Jewish, you could be a perfect match for my youngest daughter.

And in so doing, you have made the world a better place and set an extraordinary example for future leaders.

It is my honor and privilege to invite former Secretary of State Michael R. Pompeo to the podium to receive the inaugural “Peace Through Strength Award.”