Israelis woke up to good news this morning as Mordi and Natali Oknin landed in Israel after eight days of being jailed in Turkey on espionage charges.

The Israeli tourists were arrested in Istanbul last week after taking a photo of the presidential palace.

In a press conference outside their home in Modi'in this morning, Natali Oknin thanked God for their release. She credited prayer and the scriptures she prayed for strengthening her during her time in jail.

"It was a miracle," Natali said after her eight-day detention: "We got a personal Hanukkah miracle."

Hannukkah is an eight-day holiday that begins this year on Nov. 28.

The Israeli government and the Mossad intervened for the release of the couple accused by Turkish authorities of spying for Israel.

Escorted back home on a private plane dispatched by the Israeli government, the couple landed at 6 a.m. at Ben-Gurion Airport and thanked the myriad of leaders involved in obtaining their release including Prime Minister Naftali Bennett, Foreign Minister Yair Lapid, Foreign Ministry staff, President Isaac Herzog “and the entire nation of Israel.”

And they are here:

Bennett and Lapid thanked Turkish President Recep Tayyip Erdoğan for his cooperation. They also spoke by phone with the couple’s family members who were waiting at the airport.

“You see? I told you that we are doing everything, and indeed we did everything,” Bennett said. “You were a wonderful partner. The family’s restraint was very critical in these days.”

“He told me they’re coming home and that we must keep it a secret,” Peri told Kan public broadcaster. “The fear was that the legal process would go on. We thought they would be sentenced to 10-15 years. At the same time, we knew the government was doing everything to return them.”

Though Bennett, Lapid and Herzog all intervened – along with the Mossad – political peers credited the leaders for keeping themselves out of the picture in contrast to the high-profile release of Naama Issachar who was jailed in Russia on drug possession charges. Then-Prime Minister Benjamin Netanyahu and his wife Sara flew to Moscow on their official plane for Issachar's release in January 2020. They escorted her home on their plane after a press conference with Russian President Vladimir Putin.

The Oknins were flown home in the dead of night while most Israelis were unaware of their release. 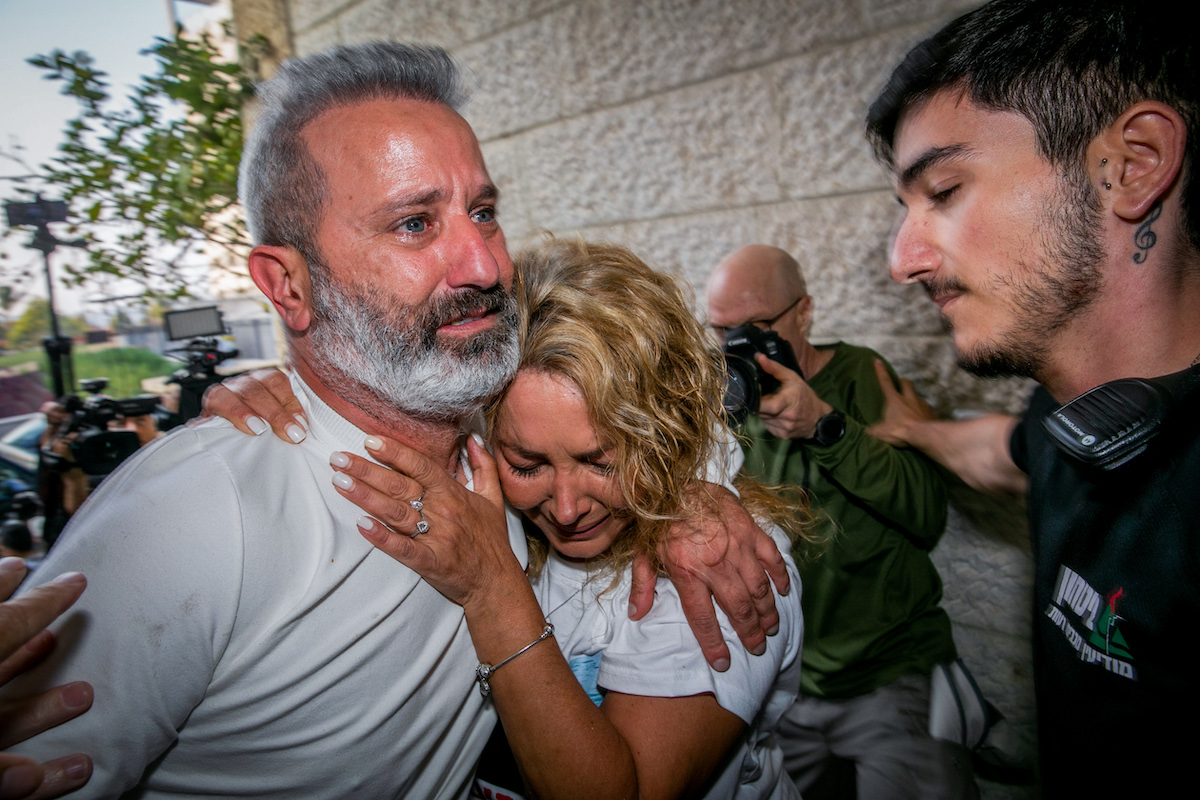 Natali and Mordi Oknin, an Israeli couple who had been jailed for taking a photo of the Turkish president's palace, seen after their arrival at their home in Modi'in, Nov. 18, 2021. (Photo: Yossi Aloni/Flash90)

"Quietly, without bells and whistles, with instructions to speak little about the situation so as not to endanger the couple, working together with the family and with the utmost modesty and professionalism, the Oknins came home," Knesset Member Merav Ben Ari said on Twitter in congratulating Bennett and Lapid.

Finance Minister Avigdor Liberman also complimented the leaders for their handling of the delicate diplomatic situation.

While in custody, the Oknins were held separately and were given limited access to their lawyer and Israeli diplomatic officials.

The couple both work as bus drivers in Israel.

Israel and Turkey have had official diplomatic relations since 1949 and Turkey is a popular vacation destination for Israelis. But since 2009, relations between the two nations have taken a downward spiral, even leading them to recall their respective ambassadors. Late last year, Erdoğan appointed a new ambassador to the Jewish state and publicly called for moving toward “a better point” in relations with Israel.