As the world’s biggest and oldest democracy – Israel’s most important strategic ally – transitions from one president to another this week, many Israelis are hoping and praying it will be peaceful and orderly process.

American Evangelical Christians are hoping and praying for the same thing.

Yet on the eve of the inauguration of Joe Biden and Kamala Harris – and amidst President Donald Trump’s final hours in office – ALL ISRAEL NEWS can report the results of an intriguing new poll revealing that Evangelicals are deeply concerned about the highly partisan and destructive political climate in the capital and the country.

Evangelicals strongly disapprove of the performance of Congress.

Most believe Congress should focus on fighting the COVID-19 pandemic and strengthening the U.S. economy, not wasting time and money on pursuing the impeachment of Trump.

That said, the survey also revealed that more than 1-in-3 of Evangelicals – 36% –  believe the House of Representatives was right to impeach Trump.

What’s more, fully 42% of Evangelicals said they disapprove of Trump’s performance in office, very likely based on the events of the last few weeks.

The vast majority of Evangelicals are worried about the dangerous moves that Big Tech companies are taking to restrict individual liberty and freedom of speech.

Fierce supporters of Trump may be quick to dismiss these results.

But the poll was actually conducted by John McLaughlin, one of the founders and senior partners of McLaughlin & Associates, a highly respected U.S. polling firm. McLaughlin is a pollster and senior political advisor to President Trump and other Republican leaders in the U.S., as well as to foreign clients such as Israeli Prime Minister Benjamin Netanyahu.

ALL ISRAEL NEWS has commissioned polling from McLaughlin in the past, but did not pay for this survey.

Last week, the Washington Examiner was the first to publish some of the results of the new poll.

This week, ALL ISRAEL NEWS is the first to publish some of what are known in the industry as “cross-tabs” – in this case the data specifically showing how self-identified “born again” Evangelical Christians responded to the survey questions.

Let’s take a deeper dive into the numbers. 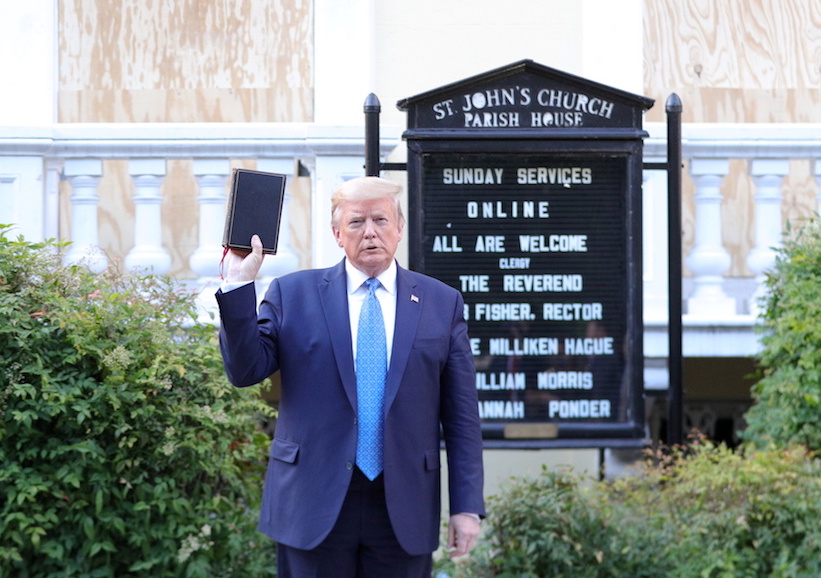 U.S. President Donald Trump holds up a Bible as he stands in front of St. John's Episcopal Church across from the White House after walking there for a photo opportunity during ongoing protests over racial inequality in the wake of the death of George Floyd while in Minneapolis police custody, at the White House in Washington, U.S., June 1, 2020. (Photo: REUTERS/Tom Brenner)

In a statement to ALL ISRAEL NEWS, McLaughlin & Associates noted that they “conducted this survey among 800 voters in the recent campaign’s 17 battleground states on Jan. 10 and 11, 2021. All interviews were conducted online among adults who identified as registered voters who voted in the November 2020 election.

"The survey sample reflects the demographics of the November 2020 election. The accuracy of the 800-voter sample is +/-3.4% at a 95% confidence interval.”