JERUSALEM – With the Trump administration officially at its end, it is worth looking at the most important moves that President Donald J. Trump made in the Middle East.

The president, after all, leaves office highly popular in Israel.

Last January, the Pew Research Center found that Trump had a 71% approval rating among Israelis, his highest rating anywhere in the world.

Last October, just before the American elections, a poll published by i24 TV news in Tel Aviv found 63.3% of Israelis favored Trump to win, while only 18.8% wanted Joe Biden to win.

It is not difficult to understand why Israelis came to appreciate Trump so much. It was precisely because he made one decision after another to strengthen Israel’s security and sovereignty, advance Arab-Israeli peace, and confront the threat posed by the Iranian regime.

Even as we ask what President Biden will do in the Middle East over the next four years, let’s take a moment to consider just 12 of the most important moves Trump made over the past four.

1. Crushed the Islamic State caliphate, stopping the genocide against Christians and Yazidis.

No single move by Trump saved more lives or set more people in the Middle East free than this one. During former President Barack Obama's years, ISIS was completely on offense and intoxicated with victory, eventually gaining control of 40 percent of Iraq and one-third of Syria.

By the end of Trump’s first year in office in 2017, however, ISIS was on the ropes. It had lost 95% of its territory. It had also lost its capital in the Syrian city of Raqqa, as well as Mosul, the second largest city in all of Iraq.

2. Moved the American embassy from Tel Aviv to Jerusalem.

Every American president since Bill Clinton had promised to do this. Yet none of them did. There was always an excuse. “It will cause an eruption of violence,” many said. “It will destroy all chances to advance Arab-Israeli peace,” said others.

Trump listened to all the arguments. He did not made the decision on Day 1 of his administration, as he had promised. But on Dec. 7, 2017, Trump made his announcement in the Oval Office. By May 14, 2018, the U.S. Embassy was formally opened in the Arnona neighborhood of southern Jerusalem. No violence erupted. And four Arab-Israeli peace and normalization treaties followed. 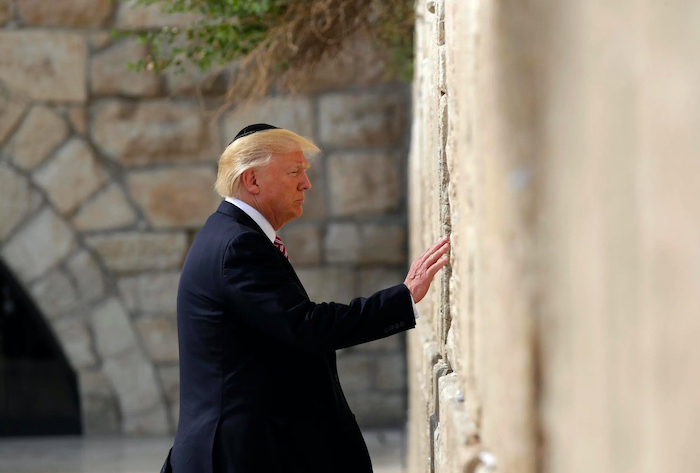 U.S. President Donald Trump prepares to leave a note at the Western Wall in Jerusalem May 22, 2017. (Photo: REUTERS/Jonathan Ernst)

After Israeli seized control of them in the 1967 war, multiple Israeli prime ministers – including Benjamin Netanyahu – sent envoys to secretly hold conversations with Syrian officials at the highest levels offering to give all or most of the Heights back, in exchange for a full peace treaty. Syria repeatedly rejected Israel’s offers. And thank God they did.

Imagine if Syria controlled those commanding heights at the peak of ISIS strength. Imagine a genocidal group preparing to wage jihad against Israel from those mountains. No. Syria had their chance. Israel needs those mountains to protect themselves from current and future enemies.

Trump and his team understood that in a way no other American administration did. On March 27, 2019, Trump formally issued a proclamation stating that “the United States recognizes that the Golan Heights are part of the State of Israel.” Good for him. 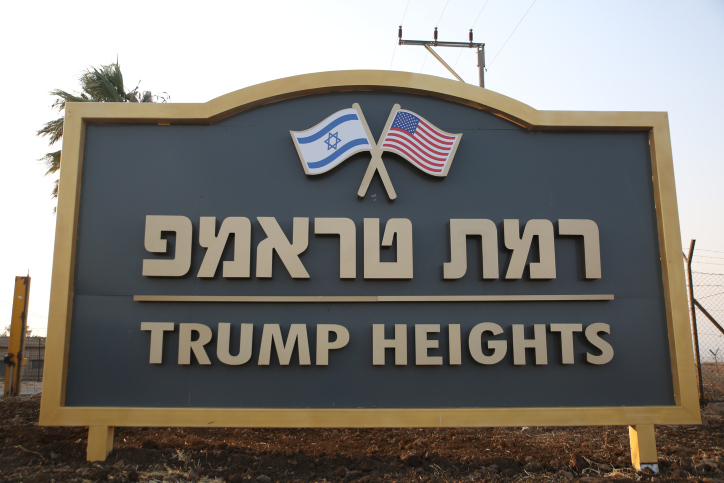 A sign reading "Trump Heights" at the community to be named after U.S. President Donald Trump, in Kela Alon in the northwestern Golan, on Nov. 7, 2019. (Photo: David Cohen/Flash90)

4. Brokered a peace and normalization agreement between Israel and the United Arab Emirates.

First, Trump and his team exposed the Palestinian leadership as having absolutely no interest in coming back to the negotiating table or ending payments to Palestinian terrorists and their families who have killed Israeli Jews.

Next, Trump worked closely with UAE Crown Prince Mohammed bin Zayed (MBZ) and Netanyahu to forge the first Arab-Israeli peace deal in more than quarter of a century – and in the process persuaded Netanyahu to halt all moves to apply sovereignty to large swaths of Judea and Samaria (West Bank) for the foreseeable future.

The deal – known as the Abraham Accords – opened the door to dramatic trade, investment and tourism agreements. It was announced in August and signed at the White House on Sept. 15 at a ceremony I was invited to attend and covered for ALL ISRAEL NEWS and ALL ARAB NEWS. In December, I spent a week in the UAE interviewing senior officials, including the Dr. Anwar Gargash, minister of State for Foreign Affairs, who welcomed me into his home and explained how important this peace deal with Israel really is to his country. 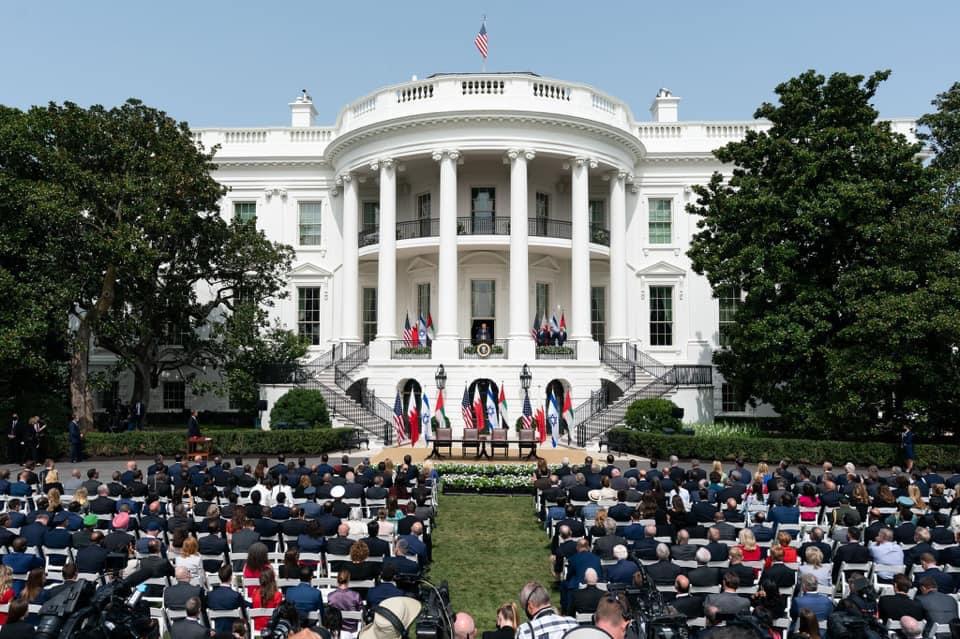 Signing of the Abraham Accords at the White House on Sep. 15, 2020 (Photo: All Israel News)

On Sept. 11, 2020, Trump announced that the Kingdom of Bahrain was also joining the Abraham Accords. It was a move we had predicted, and enormously important in building momentum in Arab-Israeli peacemaking. In December, a key Bahraini official joined the Advisory Board for ALL ARAB NEWS. Later that month, I spent a week in Manama, the capital, meeting with senior Bahraini officials, all of whom told me how eager they are for warm, close relations with Israel, “robust” trade and tourism, as well as close military and intelligence ties against common threats, especially Iran. 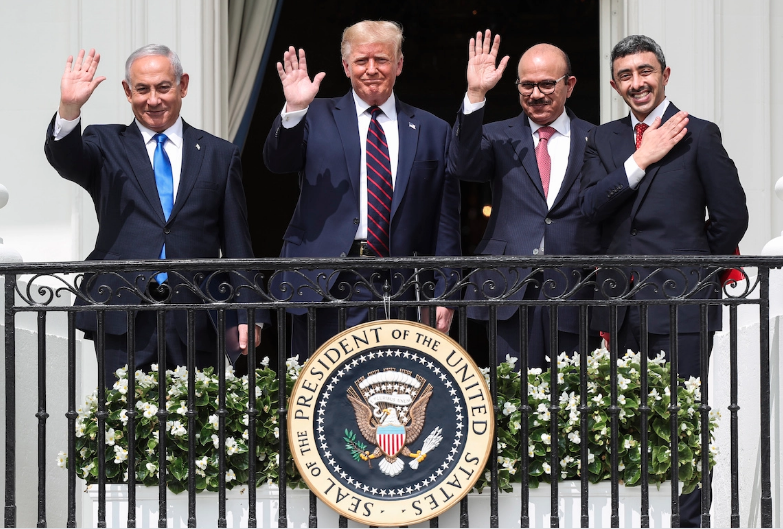 On Oct. 22, 2020, ALL ARAB NEWS reported that Sudan was about to announce a peace deal with Israel. Sure enough, Trump made the announcement the very next day. Why was this one so important? “The Sudan we see today is different than the Sudan of 53 years ago,” a well-placed Israeli diplomatic source told me, referring to the days just after the Six-Day War of 1967. “We are, therefore, optimistic that the famous ‘Three Noes of Khartoum’ – no to peace with Israel, no to recognition of Israel, no negotiations with Israel – will hopefully soon be transformed into ‘yes to peace with Israel, yes, to recognition of Israel, and yes to negotiations with Israel.’” 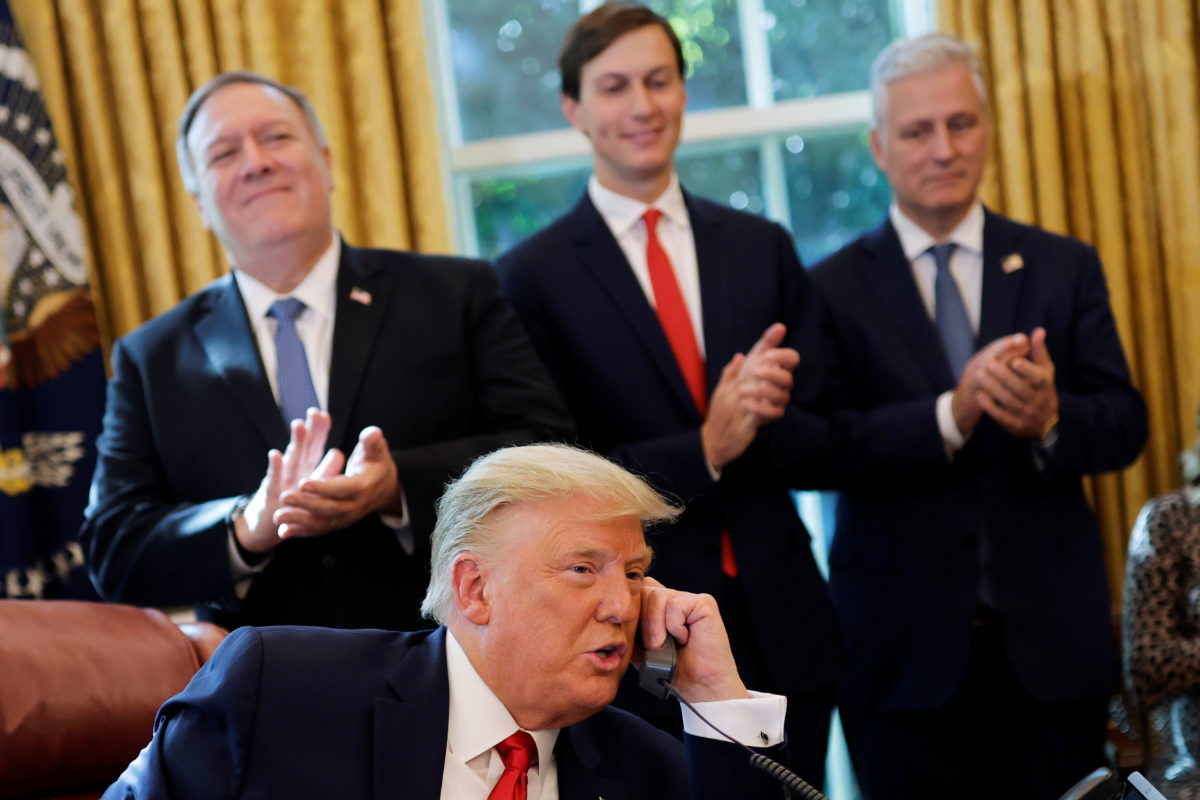 On Dec. 10, 2020, Trump announced the fourth normalization deal in just 4 months, this time between Israel and the Kingdom of Morocco. To be sure, this was not exactly like the others. Rabat and Jerusalem have a long history of quiet but peaceful relations. But Rabat cut off most officials ties with Israel during the Second Intifada, almost 20 years ago. Trump and his team were able to persuade King Mohammed VI to reengage with Israel, and the countries are now on a path to full normalization.

In June of 2020, I wrote a column for The Jerusalem Post laying out the choice for Netanyahu: Do you want sovereignty over Israeli settlements in Judea & Samaria (i.e., the West Bank), or peace with the Saudis, because we can’t have both? I urged Netanyahu and his team to put their full attention on opening up normalization agreements with all of the Gulf Arab states, including the Saudis. Fortunately, this is exactly the path Netanyahu chose, but only after Trump and his team worked hard to persuade Bibi.

Full normalization with Riyadh hasn’t happened yet, but in the fall of 2020, Trump did persuade the Saudis to allow Israeli and other commercial jets to fly over the Kingdom, to and from Tel Aviv. This was a big deal.

9. Withdrew the U.S. from the Iran nuclear deal and continued selling state-of-the-art weapons systems to Israel.

On May 8, 2018, Trump announced that he was pulling out of the insane and dangerous Iran nuclear deal known by its clunky, bureaucratic name, the Joint Comprehensive Plan of Action (JCPOA).

This sent a critically important message to Tehran that the Obama administration’s policy of appeasement was effectively over. It also sent a message to Israel and America’s Arab allies that Trump understood just how deeply flawed that Iran deal was, and that he would not be played by the Iranian regime like his predecessor had been.

The fact that Trump continued delivering Israel F-35 stealth fighter jets to Israel, as well as selling Jerusalem long-range refueling tankers and other critical military hardware further underscored the message, and the closeness of the U.S.-Israel alliance.

10. Launched a “maximum pressure” campaign against the Iranian regime.

Shortly after Trump withdrew from the JCPOA, Secretary of State Pompeo delivered a major and important address at The Heritage Foundation in Washington on May 21, 2018, laying out the administration’s tough new approach towards Tehran. The first item on the agenda was imposing tough new economic sanctions on the regime. The “maximum pressure” campaign, as it came to be known, certainly squeezed Iran hard. The test for the Biden administration will be whether they can persuade the mullahs to deescalate and change direction to a less hostile and dangerous course.

11. Assassinated the most wanted radical Islamist terrorists in the world.

On Oct. 27, 2019, Trump announced the assassination of Abu Bakr Al-Baghdadi, the head of the Islamic State, responsible for the slaughter of Muslims and the campaign of genocide against Christians and other minorities in Iraq and Syria.

On Jan. 3, 2020, Trump announced the assassination of Qassem Soleimani, the top terrorist strategist of the Iranian regime, and the #1 most wanted terrorist in the world. Having been responsible for the deaths of scores of Americans and our allies over the years, Soleimani was taken out in precision drone strike at an airport in Iraq.

These were hugely important decisions that have brought justice to some of the most wicked men of our generation, and showed the world of radical Islamist terrorists that when U.S. leadership shows resolve, there is nowhere on earth they can hide.

12. Drew down U.S. forces in Iraq and Afghanistan, and avoided drawing the U.S. into a new war in the Middle East.

To his credit, Trump did not engage in any new wars in the Middle East or around the world. And many American military families are very happy that Trump drew down U.S. forces in the two war zones in the region, effectively ending America’s military engagement there.

Significant? Absolutely. The right thing to do? Only time will tell. Count me skeptical. I’m deeply grateful for the tremendous victories U.S. forces achieved in both countries, and mindful of the high cost of doing so. But after the U.S. defeated Japan, North Korea and Germany in previous wars, it did not pull all of its forces out. Instead, the U.S. kept significant forces in these theaters to secure a long-lasting peace. When Obama pulled all U.S. forces out of Iraq in 2011, it created a vacuum into with ISIS surged and a genocidal caliphate resulted. The U.S., then, had to go back in and with the help of our Arab and Kurdish allies fight all over again.

Biden is not likely to flow significant numbers of U.S. forces back into the Middle East unless a major conflict comes. My concern is that our enemies are seeing Trump’s “draw down” as an American retreat and will do all it can to fill the vacuum.