Israel’s national flag has been hoisted at the newly established field hospital in Ukraine, Kochav Meir (Shining Star), which is expected to become operational on Tuesday.

“Israel has been extending its hand to render assistance in the crisis in Ukraine for several weeks now, from the very first moment – in various ways,” Bennett said. “We are managing this unfortunate crisis with sensitivity, generosity and responsibility, while maintaining a balance between the various factors – and they are complex.” 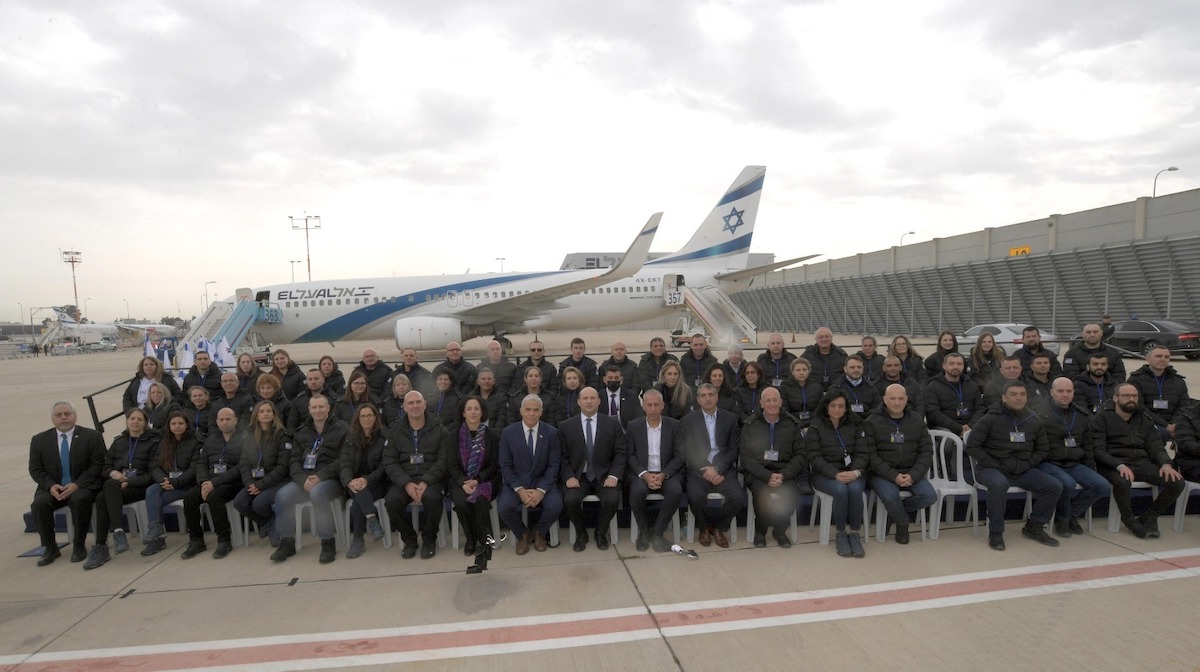 Departure ceremony for the Israeli Aid Delegation that will establish a field hospital in Ukraine, Mar. 21, 2022. (Photo: Haim Zach/GPO)

He stated emphatically that the Israeli public should be proud of the Jewish state's contribution and assistance to Ukrainian citizens.

“Be proud of all the actions that the State of Israel is doing: Shipments of medicines, establishing a field hospital, actions in other areas – there are not many countries acting on such a scale,” he added in a strong statement most likely in response to yesterday’s short and highly-critical speech by Ukrainian President Volodymyr Zelenskyy to Israel’s Knesset.

The medical facility is named after Israel’s legendary Prime Minister Golda Meir who was born in the Ukrainian capital, Kyiv. The hospital was established with an investment of approximately 21 million shekels ($6.5 million) and is the product of a collaborative effort involving the reputed Sheba Medical Center in Tel Aviv, Israel’s Ministry of Foreign Affairs and the Israeli Health Ministry.

Another step to establish a field hospital in Ukraine: the cargo planes set off today from Israel. 17 tons of equipment for the construction of a field hospital, “Shining Star”, will take off for Poland to prepare for the hospital’s construction in Mostyska, western Ukraine. pic.twitter.com/8iIg2kADAq

Located in the town Mostyska, close to Lviv in western Ukraine, the hospital facility is well-positioned to assist the large wave of wounded Ukrainian civilians fleeing westward toward the Polish border, which is considered safer than other parts of the war-torn country.

“It’s incredibly emotional to run the whole logistics side of things. It’s a very complicated operation, with coordination with several bodies, including UPS [who transported the medical equipment], El Al, the Foreign Ministry, the Health Ministry. It challenged everyone to give everything and raise a hospital that will be one of the best in the world, in terms of its capabilities, contents and medical team,” Katzora said.

Most of the Israeli medical staff are native Russian- and/or Ukrainian-speakers, in order to have effective communication with local patients who often do not speak English.

Alexey Tsiboulski, Sheba’s logistical manager who grew up in the Soviet Union, said he feels personally connected to the people of Ukraine.

“I’m really emotional. I walked into the school building [adjacent to the outdoor hospital] and it reminds me of the one I studied in 40 years ago,”Tsiboulski said.

“To come here and help the Ukrainian nation, I didn’t even think twice when they asked, I wanted to come and give a hand,” he added.

In some cases, close family ties connect the Israeli medical staff to Ukraine.

Israeli ophthalmologist Katrina Kiroshka, who moved to Israel from Ukraine in 2014, decided to send medicine and food to her 87-year-old grandfather who lives in the besieged Ukrainian city of Kharkiv, which has been under heavy Russian bombardment. Together with some friends, Kiroshka established the non-profit organization Israeli Friends of Ukraine.

She also raised funds to buy medical supplies in Poland for Kharkiv hospitals. The medication was then transferred to those with the most need, including her grandfather.

Despite considerable Israeli efforts, Kiroshka admits that the campaign alone would not be sufficient to cover the growing medical needs in Ukraine.

“Our campaign to raise donations from friends will not be enough in the long run. The drugs and other items cost money, transportation is very expensive and the pace of requests is only increasing, day by day,” she lamented.

Meanwhile, Katzora of Sheba Medical believes the new Israeli hospital will be able to treat a large number of patients in Ukraine when it becomes operational.

“We don’t know how many people will come, but we know a lot are interested in it. I think two to three days after we start to work, there will already be many people here.”

The Jewish state is frequently among the first countries in the world to send humanitarian assistance to war and disaster areas worldwide.

"Today we are sending 100 tons of medical equipment and humanitarian supply as the government decided to send this delegation. As the national carrier we are proud to do our job," said El Al Vice President Shlomi Am Shalom at the time.