JERUSALEM—On Wednesday, ALL ISRAEL NEWS reported that U.S. President Joe Biden was under tremendous and growing pressure from the left-wing of the Democrat party to force Israel into a premature ceasefire.

Later we reported that Congressional Democrats voted 217 to 209 to defeat a bill that would have applied economic sanctions on companies and organizations that fund the Hamas terrorist organization.

The stories led Fox News anchor Shannon Bream to invite ALL ISRAEL NEWS Founder and Editor-in-Chief Joel C. Rosenberg back onto the network to discuss these stories.

It was Rosenberg’s third appearance on Fox News this week.

“The U.S. does have to pressure Israel for a détente,” Tafuri said. “We need a ceasefire but we also need more than that. We need both Israel and the Palestinians to compromise on the key issues that have caused them to get into this fighting.”

The two sides, he said, “are never going to fight their way out of these problems. Only compromise is going to work, and it's going to take a really strong president to knock their heads together and get them to both agree to some things that they don't want to do.”

Rosenberg reacted strongly against this argument, warning that it was exactly such left-wing thinking that was endangering Israel, a peaceful democracy and America’s most important ally in the Middle East.

“I would totally disagree with my colleague on this program,” Rosenberg said. “There is no reason to ‘knock Israel's head’ against anybody.”

“The idea is so repugnant that Israel needs to be ‘encouraged’ for peace,” Rosenberg added. “What we need is for the United States – every single one of the left-wing, far-left, Bernie Sanders, AOC, Rashida Tlaib, all of them – to stand with Israel. The more unified that the United States is behind Israel against radical Islamist terror, the better chance we have to solve this problem.” 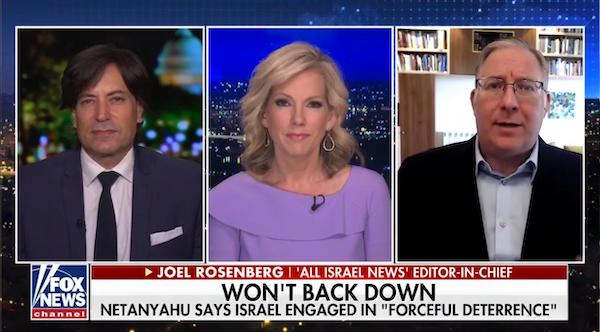 “We don't have a problem with the Palestinian people in Gaza,” Rosenberg argued. “We have a problem with terrorists. And I got to say, the far-left in the United States, in Congress, are becoming human shields to try to protect Hamas rather than protect America's democratic ally – a strategic ally – the State of Israel.”

Here is the full transcript of the 8:24 minute segment:

BREAM: Okay, so back to Israel for a first-hand account of life there in the middle of this conflict. And we're also going to get some insight from a foreign policy perspective on the choices that President Biden is now facing from former State Department official David Tafuri and, on the ground in Jerusalem, author of the new book, The Beirut Protocol, Joel Rosenberg, who also runs two online news sites covering everything going on in the region.

Gentlemen, welcome back to both of you.

ROSENBERG: Thank you, Shannon. Great to be with you.

BREAM: I want to play something from a couple of members of Congress, of the Senate, today – Sen. [Bernie] Sanders and also Sen. Tom Cotton – on this call for a ceasefire. Here's what they had to say.

SEN. BERNIE SANDERS: The Senate urges an immediate ceasefire to prevent any further loss of life and further escalation of conflict in Israel and the Palestinian territories.

SEN. TOM COTTON: Calls for a ceasefire are tantamount to Hamas propaganda. We cannot allow Hamas to fire thousands of rockets and missiles into Israel and then to run back into its tunnels, and run behind women and children, and say, oh, “We need a ceasefire,” and then support those calls for a ceasefire.

BREAM: David, how does the U.S. diplomatically unpack these demands from two sides of the aisle? There are some Democrats and Republicans who agree on a lot of what's going on in Israel. But the more progressive Left is calling out President Biden and saying, “You've got to be tougher and push for the ceasefire,” and asking him to dial back his pro-Israel language. They [Israelis] are an official ally of this country.

TAFURI: Right. You know, if you're getting attacked by AOC and “The Squad” on the left and by Sen. Ted Cruz, as you mentioned earlier, on the right, you're probably actually doing something right. So, Biden has charted a course right down the middle. He's made clear that Israel has the right to defend itself. He's going to even support Israel in defending itself by providing more precision weapons. And the Iron Dome has worked pretty well, as we've all seen over the last week, and that was supported and funded by the U.S. government. So, the U.S. should continue that military alliance.

But the U.S. does have to pressure Israel for a détente. We need a ceasefire. But we also need more than that. We need both Israel and the Palestinians to compromise on the key issues that have caused them to get into this fighting. They're never going to fight their way out of these problems. Only compromise is going to work, and it's going to take a really strong president to knock their heads together and get them to both agree to some things that they don't want to do.

On the Israel side, paramount is giving up settlements and new settlements. And on the Palestinian side, starting to disarm, bringing those who've engaged in violence to justice – that's what the Palestinian Authority needs to do. That would be a nice start. There's lots of other things that need to happen, though, to make some progress. And only a strong U.S. president can accomplish that.

BREAM: Joel, Fox News and I visited with you. You were a guest when we broadcast live from Jerusalem. I had gone over into Ramallah to sit down with the then PLO's top negotiator, Saeb Erekat, who died late last year. And he told me at the time he felt like there was nothing to negotiate. He said once President Trump had named Jerusalem and recognized it as the capital of Israel, he said there was nothing left to talk about. I mean, he seemed to be at an impasse at that point, saying they just weren't going to budge on anything, and there was nothing to discuss. Where are we tonight as you live and work in that region?

ROSENBERG: Thank you, Shannon. It was great having you here. And I'm sorry that we're a nation at war again. But your interview with Saeb Erekat was very important. I remember it well because sadly, he passed from this world without ever agreeing to any agreement ever with Israel. And there have been many offers put on the table and the Palestinians have never put one on the table. But that's not the issue that we're dealing with right now.

We have to understand that the West Bank – the Palestinian Authority – that's totally separate, actually, from Gaza. Gaza is controlled by a terrorist organization, Hamas. And I would totally disagree with my colleague on this program. There is no reason to “knock Israel's head” against anybody. We are not the aggressor here – 4,000 rockets have been fired at us. And the idea is so repugnant that Israel needs to be “encouraged” for peace. What we need is for the United States – every single one of the left-wing, far-left, Bernie Sanders, AOC, Rashida Tlaib, all of them – to stand with Israel. The more unified that the United States is behind Israel against radical Islamist terror, the better chance we have to solve this problem. We don't have a problem with the Palestinian people in Gaza. We have a problem with terrorists. And I got to say, the far-left in the United States, in Congress, are becoming human shields to try to protect Hamas rather than protect America's democratic ally – a strategic ally – the State of Israel.

BREAM: David, it’s critical to make that distinction between the Palestinian people and Hamas. And, you know, there are questions now about the world as they watch this to see the strength of the U.S.-Israel relationship, [including] with Hezbollah there on the northern border of Israel. [They are] watching this very clearly and carefully because they, too, have missiles and they, too, do not want the best for Israel. So, you know, where do we go from here?

TAFURI: Well, that's a big problem. I mean, your guest is right about the fact that the situation in Gaza is different from the West Bank. Hamas is a terrorist organization. The Gaza people have been misled and let down by their leadership. And until they get rid of that leadership, we're probably going to continue to suffer the consequences of that.

But where I don't agree with your guest about is that there are some things that Israel could do to ameliorate the situation. I already mentioned that it should stop new settlements. Those new settlements are provocation. Israel is eventually going to have to live in peace with Palestinians. There are more than 4 million Palestinians in Israel and in the occupied territories, and they simply aren't going away. So, the only solution is a two-state solution. And some of the things that Israel is doing is pushing us back further away from a two-state solution.

What I hope President Biden and the administration will do is get some real things on the table that would move towards a two-state solution and a peace agreement. We're very far away from that. So, that's why I say there need to be some compromises giving up on the settlements. There are also in Israel some right-wing people who engaged in violence and they should be brought to justice, just like the Palestinians who engage in violence should be brought to justice.

BREAM: Final word to you, Joel, to wrap us up.

ROSENBERG: Shannon, settlements have absolutely nothing to do with this argument. Okay? That [requires] a negotiated agreement with civilized people. We want that in Israel. And we've offered multiple peace treaties. Presidents in the past – Democrat and Republican – have done that.

But we're dealing with a radical Islamist terror organization. Let's make that clear. Don't act as though Israel isn't interested in peace, that we're not interested in a ceasefire. This is insane. This is insane. We want peace. But we will not allow 4,000 rockets to be fired at our citizens, have half our country in bomb shelters, and then say, well, “We need to deal with settlements in the West Bank.” We're happy to deal with that question. It's the Palestinian Authority that doesn't want to make peace, doesn't even want to sit down. So, you have to separate this out. It's not moral equivalence. It's not, “Let's just sit down and negotiate with Hamas and Islamic Jihad.” You cannot. These are terrorists and your guest, and all the left wing in the United States, have got to get this clear.

What if Washington or New York or L.A. was under 4,000 rocket attacks? Would you be negotiating? No. You would be hitting hard until you stop the problem.

BREAM: All right – Joel, David, we thank you both – we're not going to solve this tonight. It has taken people many more decades and much more effort than what we've done here. But we pray that there will be peace for the people in the region. Thank you both.