A trio of fourth-graders walking in Kibbutz Parod in the Upper Galilee region of Israel found a 2,000-year-old oil lamp sticking out of the ground.

Alon Cohen, Liam Atias and Rotem Levnat said at first they thought the lamp was an uncommon kind of stone. They carefully pulled it out of the ground and saw it was an oil lamp made out of clay.

The three children took it to their parents, who contacted the Israel Antiquities Authority (IAA). The IAA determined that the lamp was 2,000 years old, and gave the children and their parents “good citizen” awards both for finding and for handing in the ancient artifact.

The children found the lamp close to an ancient site in the kibbutz where the IAA is conducting an archaeological excavation before the planned construction of a new neighborhood begins.

According to archaeologist Haim Mamliya, the find is important because it helps give archaeologists an idea about the size of the ancient site.

“Discovery of the lamp may give us a clue as to how far the borders of the ancient site reached,” Mamliya said. “If it weren’t for the children, we wouldn’t know this. There is no doubt that the find sheds new and interesting light on the excavation.”

According to IAA Director of Education Einat Ambar-Armon, the Parod area contained a large Jewish village in ancient times.

“For the most part, the lamps of this type are without decoration, in contrast to the Roman lamps of the same period. This is a special discovery. It is quite rare to find just a whole lamp like this,” she said. 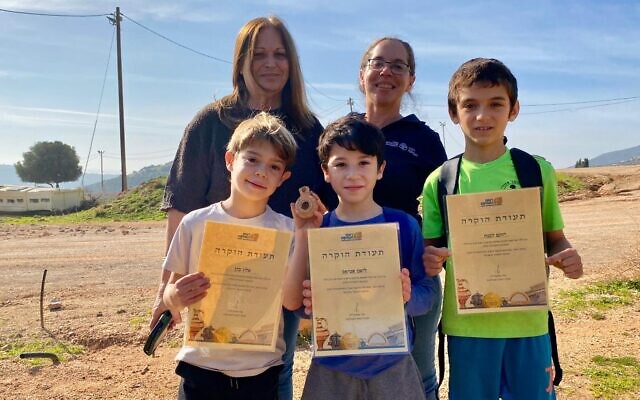 Schoolchildren from the city of Nof HaGalil participate each year in a preservation project related to the Nahal Parod stream or the surrounding area. The boys’ school principal, Daniella Hazan, said she believes it was the skills learned from that project that enabled the children to distinguish the object from other stones. She said she thought it might have been the nearby construction work and the vibrations coming from the machines that made the lamp come to the surface.

Eskosido noted that the precious find had come just a few days before the festival of Hanukkah, or Festival of Lights, began – candle lighting marked the first of the eight days on Sunday night.

He referred to the lamp’s find as a “miracle” as it relates to the story of Hanukkah, which tells the tale of a small amount of oil, enough for just one day, lasting for eight.

“Every year, thanks to the timing of rains that hit us before and close to the Hanukkah holiday, we receive ‘Hanukkah miracles’ and amazing surprises, glimpses coming from the ground,” Eskosido said.

The lamp now joins the scarab in Israel’s state archives, available to researchers.