The foreign ministers of four Muslim nations and the United States were making their way to southern Israel this evening for a historic gathering that reflects a shifting geopolitical map in the region and the dangers looming on its horizon.

The Negev Summit, which will take place today and tomorrow, was pulled together quickly and kept developing over the weekend. We first reported about U.S. Secretary of State Antony Blinken’s scheduled trip to Israel, the West Bank, Morocco and Algeria.

Then on Friday, Israeli Foreign Minister Yair Lapid announced that he would host a summit in Israel with Blinken and foreign ministers from the UAE, Bahrain and Morocco. The following day, the Egyptian foreign minister announced his attendance as well.

And even though the summit is not taking place in Jerusalem – the Israeli capital, recognized by only a few allies of the Jewish state – Sde Boker is the home of David Ben-Gurion, Israel’s founding father and first prime minister.

For Israel, the summit comes at a critical crossroads of diplomatic relations and regional challenges. Israeli Prime Minister Naftali Bennett noted Israel’s foreign relations are “experiencing a good period,” but also voiced Israel’s opposition to a revived nuclear deal with Iran, as well as reports that the U.S. is considering dropping the Islamic Revolutionary Guard Corps from the terrorist list.

“The Arab world understands more and more that Israel has always been on the side of peace and cooperation,” Bennett said at the Cabinet meeting on Sunday morning, but added, “While we are discussing peace, there is a player that does not cease warmongering and lighting fires.”

“We received another reminder of this over the weekend in the attack by the Houthis, who are managed by the [Islamic] Revolutionary Guards, against Saudi Arabia,” Bennett said referring to a drone attack by the Iranian-backed Houthis against a Saudi Arabia petrol plant on Friday.

“The thought that this organization will be removed from the terrorist list, from the FTO, is very disturbing and not just to us. We are still hoping and working toward preventing this from happening,” Bennett said.

In a meeting with Blinken in Jerusalem earlier on Sunday, Bennett noted the changing landscape in the Middle East.

“We’re cultivating old ties and building new bridges. We’re rejuvenating old peace and charging it with the new energy of the Abraham Accords,” Bennett said. “We're working together to overcome the old forces of darkness and build a new future that is better, brighter and promising.” 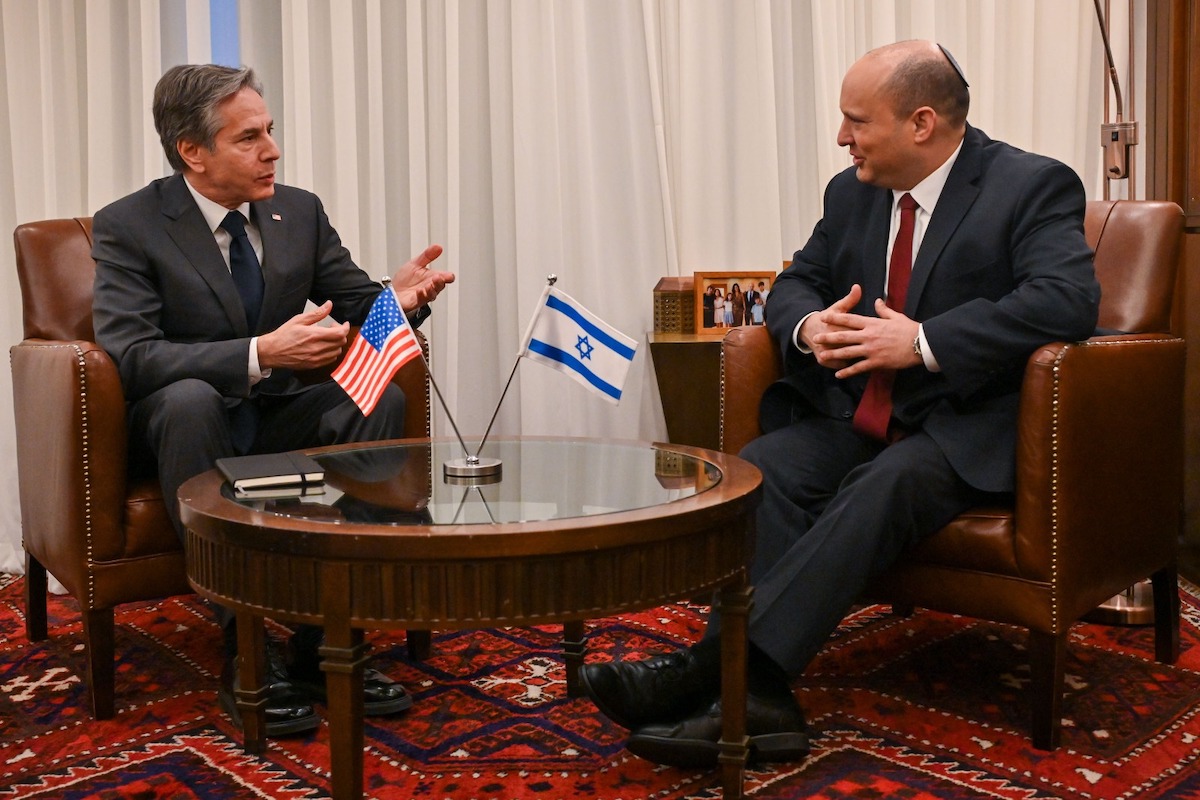 And while he also thanked Blinken for his personal commitment to expanding the Abraham Accords, Bennett voiced Israel’s opposition to dropping the IRGC from the terror list and the nuclear deal, imploring that “the United States will hear the concerned voices from the region, Israel's and others, on this very important issue.”

In a show of good faith to the Democrat-led U.S. administration, Israel announced today overtures toward the Palestinians including approving 20,000 work permits for Gazans to work in Israel and an investment of $15 million (40 million shekels) to improve the crossings between Israel and the Gaza Strip.

Bennett also touted Israel’s efforts in Ukraine, including a field hospital that has treated over 500 patients already.

Blinken emphasized America’s commitment to a two-state solution and also met with Palestinian President Mahmoud Abbas in Ramallah today. He said that “all sides” need to take steps to maintain calm during Ramadan and to avoid steps “that could raise tensions, including settlement expansion, settler violence, incitement to violence, demolitions, payments to individuals convicted of terrorism, evictions of families from homes they've lived in for decades.”

“These are just the latest demonstrations of broader engagement that is made possible as normalization becomes the new normal throughout the region. And again, I applaud Israel's leadership, its engagement, its diplomacy in building these agreements and making them real,” he said.

The UAE, Bahrain and Morocco signed the Abraham Accords, normalizing ties with the Jewish state in 2020.