Over these next two days, Armenians around the world will conduct protests and attend vigils and masses in order to remember the victims of the Armenian Genocide and to call on countries to recognize the atrocities committed by Turkey against their people between 1915 to 1918.

In Jerusalem, some Israeli and Palestinian supporters will join them, but largely, the Armenians of Israel do this alone every year.

Tourists are usually aware of the Israeli-Palestinian conflict and are acquainted with most quarters of Jerusalem’s Old City. But many know little about the Armenian community, which – despite its small size – has had a continual presence in Jerusalem since at least 301 AD.

Leading up to the commemoration of the Armenian Genocide, I felt it would be good to understand what life is like for the Armenians in the Holy Land, growing up a minority of minorities both in the Jewish state and on the Palestinian side.

And so I met up with Apo Sahagian, a 30-year-old musician, to learn more about this long-standing and unique Christian subset here.

Do you consider yourself Israeli or Palestinian? I asked at the beginning, just for clarity.

“I am an Armenian born in Jerusalem,” he said.

This is a foreign concept to most world citizens who define their identity by the land in which they are born. Sahagian grew up in both the Old City, which is under Israeli control, and Bethlehem, under Palestinian control. 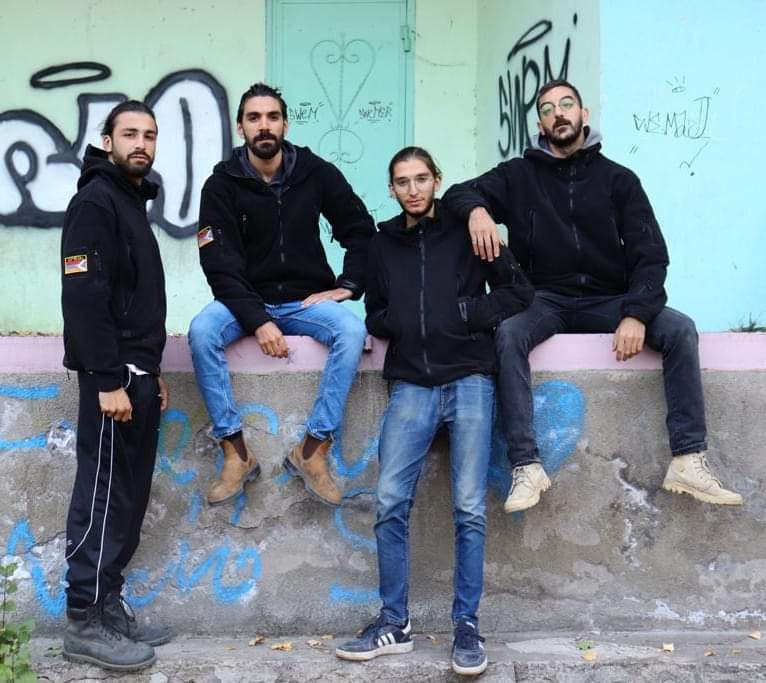 Apo Sahagian, second from the left, and the Coffeepot Unit in Goris, city south of Armenia. (Photo: courtesy)

And though he flows with both societies – in fact, he works with both Israelis and Palestinians and as a musician he sings in Arabic and Armenian, specializing in the folksongs of his homeland – he identifies with neither of them on a nationalistic level.

“We as Armenians didn’t really find our footing in the Israeli-Palestinian conflict. So we found a loophole: We are ‘Jerusalem Armenians’ and, in that way, we combine our hometown, Jerusalem, with our homeland, which is Armenia.”

Armenians practice Christianity and they have their own Orthodox doctrine which differs slightly from the majority of Christians here who are ethnically Arab and belong to the Greek Orthodox church. Some of the Holy Land Armenians are Catholic and a handful are Evangelical. They are a small slice of both the Israeli and Palestinian demographic.

“I have never had an identity crisis in my life,” Sahagian said. “Because you have Jews on one side and Muslims on the other, you sort of have the ability to maintain your identity.”

“I also refuse to accept a victim mentality of being a minority here.”

The Armenian Diaspora here in the Holy Land burgeoned largely during three waves of immigration.

First were the “Crusader” Armenians that came as pilgrims and settled here hundreds of years ago. Many live in Arab neighborhoods and have integrated with the Arab and/or Palestinian population.

The second wave was comprised of refugees who fled the Armenian Genocide, leaving Turkish lands and making their way – by foot – to Jerusalem.

The third wave of Armenians came along with Russians during the mass immigration from the former Soviet Union. They are more assimilated into Israeli society and many live outside of Jerusalem in cities such as Haifa and Jaffa.

Sahagian is part of the largest sector – the descendants of refugees. His grandparents fled the Genocide.

“The refugees came in a cocoon of trauma,” he said. “When they reached the Armenian Quarter, the whole idea was to preserve their identity as much as possible.

Nevertheless, Sahagian fears, “We are seeing a dying out of the culture.”

Many have left for better opportunities abroad, some have intermarried, primarily with Palestinian Christians, and the number of Armenians has dwindled considerably since its peak of between 16,000 to 25,000 in 1948 to perhaps 2,000 now.

Land owned by the Armenian Patriarchate is being sold to Muslims and Jews. Turkey is even buying land in Jerusalem, its way of expanding its geopolitical grip in Israel.

But of all the Armenians that I could interview about what life is like in Jerusalem for the minority group, Sahagian was not the one to shed light on life here. He kept pulling the conversation back to Armenia.

And for good reason. Sahagian has been to Armenia 20 times and his brother moved there five years ago. When war broke out last year between Armenia and Azerbaijan over Nagorno-Karabakh, Sahagian went to volunteer to help Armenia.

Because he speaks four languages like most of the country’s Armenians, Sahagian and three other volunteers from the Diaspora – including another from Jerusalem – were sent to the border where they could check the IDs of journalists trying to get into the region. This cadre rose to fame throughout the country as the “Coffeepot unit” after the local media did a story about them providing meals and coffee for the police who served at the checkpoint and anyone else who happened by the border.

Sahagian also saw images that were seared into his heart and mind during this time. From his vantage point on the border, he could see Shushi, the iconic province that represents to Armenians the story of their revolution. He visited the church in the town’s center and lit a candle.

One week later, civilians came streaming through the checkpoint. One of them brought the devastating news: Shushi had fallen. It was no longer in Armenian hands.

Sahagian recalled an old man with a cane – probably in his 90s – taking his last steps before being exiled from his lifetime home.

“Suddenly it was no longer a black-and-white photo like we grew up with from the Genocide,” Sahagian realized. “With Shushi, we lost our third republic.”

Now prevented from crossing the border, Sahagian observed to his colleagues at the checkpoint, “I feel like a Palestinian who can’t get into Jerusalem.”

It was a poignant moment that clarified Sahagian’s patriotism.

“As a Jerusalemite Armenian living in the 21st-century, what is my obligation: To go to Armenia and help in its development, or to stay in the Armenian Quarter and preserve it?”

Sahagian relayed an Armenian saying in revolutionary literature: “The fool crosses the river while the prudent wait.”

“Now is the time for the fools to go,” Sahagian said wistfully, nine toes in Armenia and one in Jerusalem. “I see only a dark tunnel, but I know that eventually there will be light at the end, perhaps for my children, or grandchildren.”

When I asked whether he would join the Genocide observances on Saturday in the Armenian Quarter, Sahagian said he prefers to focus on the future – to wrest Armenia itself from the brink of extinction.

“Armenia has been shrinking and, during this past war, we shrunk again by 30%,” he said. “So I reached the conclusion that only Armenian soil is important for me.”

It is fascinating to me that, with all of the controversy surrounding Jerusalem and the land here, this Armenian is looking to land elsewhere.