On April 24, 1915 – a day that came to be known as Red Sunday – the Ottoman Turks rounded up and later executed hundreds of Armenian intellectuals who were influential in politics, business and religion.

This began the Armenian Genocide, the systematic expulsion and execution of 1.5 million Armenians at the hands of the Turks. The scope and methods of the killings were mind boggling, from crucifixions and beheadings to death marches where Armenians – forced to leave their homes and head into the desert with nothing – simply dropped dead along the way.

Those who survived were dispersed to neighboring countries and eventually resettled throughout the Middle East, then the world, creating a Diaspora that is more widespread – though smaller in number – than that of the Jewish people. 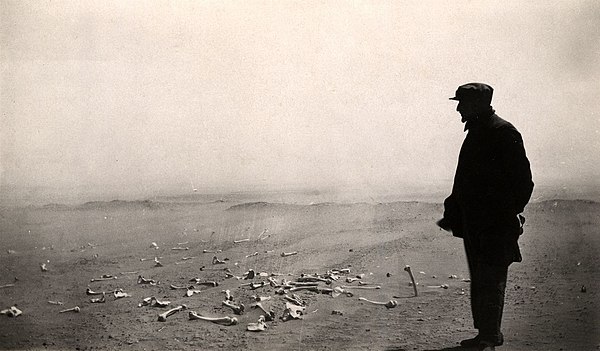 The photo is from the Arkivverket (Norwegian Archives). It depicts the Armenian leader Papasyan seeing what's left after the horrendous murders near Deir-ez-Zor in 1915-1916. Some of the bones have been washed away by the Euphrates river. (Photo via Wikimedia Commons)

In devising his plans for the Holocaust, Adolf Hitler is believed to have said, “Who, after all, speaks today of the annihilation of the Armenians?”

Yet, while historians call this event a premeditated campaign to exterminate an entire people, governments around the world – such as the United States and Israel – do not officially recognize the Armenian Genocide.

Ironically, Israel’s Holocaust Remembrance Day (the 27th of Nissan on the Jewish calendar) and Armenian Genocide Day always fall within the same season. Traditionally, a few hundred Armenians are joined by a handful of Jewish intellectuals and activists in Jerusalem for the memorial.

Every year, as the date approaches, editorials appear in news outlets around the world calling on governments to hold Turkey – which does not acknowledge the scope of these atrocities – accountable. 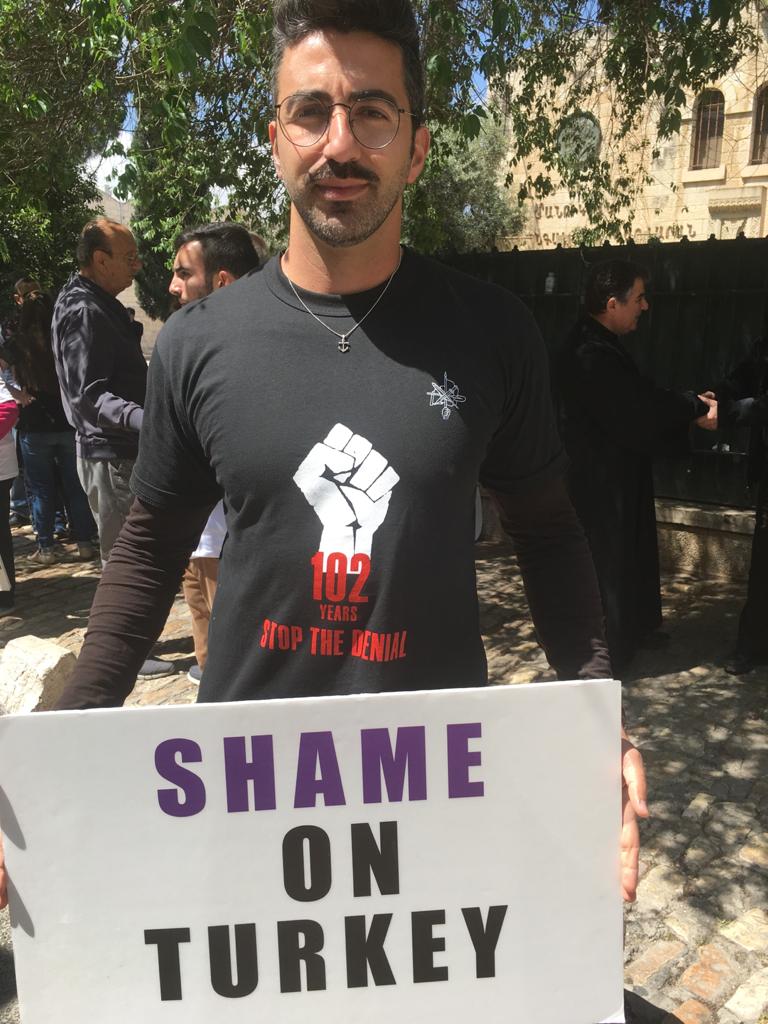 Protestors in Jerusalem march to the Turkish consulate to demand recognition for the Armenian Genocide. (Photo: All Israel News)

And every year, Turkey threatens countries which might be considering it. For instance, Turkish Foreign Minister Mevlut Cavusoglu said this week that if U.S. President Joe Biden recognizes the Genocide, the already strained relations between the two countries would deteriorate further.

“If the United States wants to worsen ties, the decision is theirs,” Cavusoglu said.

Then there is Israel.

“It’s unthinkable that the Knesset ignore this tragedy,” Rivlin said in 2013. “We demand that people don’t deny the Holocaust, and we can’t ignore the tragedy of another nation.”

This year, it appears the issue is not even on the radar, or at least, not in the media.

Israel has long been wary of upsetting its ties with Turkey and, in a precarious Middle East, the Jewish state needs all the allies it can get. Now, however, with the Abraham Accords, Israel has an expanded circle of relationships that are more viable and less volatile than with Turkey.

“Turkey today is an increasingly dictatorial regime which gives a safe haven to Hamas terrorists, amongst other radicals. We cannot depend on a state that acts this way, nor should we,” Emily Schrader told ALL ISRAEL NEWS.

Schrader, a Jerusalem Post columnist who is CEO of Social Lite Creative and a research fellow at the Tel Aviv Institute, noted that Turkey, which has aligned itself with Israel’s foes, is destabilizing the region and is expanding its “global hegemony at the cost of human lives, like the ethnic cleansing they’re committing against the Kurds in northern Syria.”

“Unfortunately, this is what happens when we refuse to educate about previous events like the Armenian Genocide. We must keep these stories in the consciousness of every generation for precisely this reason,” she insisted.

Schrader, who made aliyah from California, said that to her, fighting for Armenian Genocide recognition is the same as fighting anti-Semitism and discrimination against Israel.

“For me, these issues are one and the same,” she said.

But former Israeli Ambassador to the U.S. Danny Ayalon told us, Israel needs to wait for other nations to take a stand first.

“The Armenian Genocide was a crime against humanity and was a precursor to the Holocaust. Hitler gave it as an example why Nazi Germany would not pay a price for systematic beastly extermination of Jews,” Ayalon told ALL ISRAEL NEWS. Despite Israel’s “special moral standing here … vital national interests did not allow Israel to consider true moral values.”

“It will take the entire international community to act in unison to make a difference and to be led by the greatest and strongest democracy in the world. We all wait for the U.S. to finally take the right stand on this very terrible massacre of Armenians in 1915,” he said.

Armenian Israelis, the largest concentration of whom live in Jerusalem’s Old City, have long despaired that Israel will recognize the Genocide, and after the most recent war between Turkey-backed Azerbaijan, which used Israeli drones against Armenian troops and civilians in Nagorno-Karabakh, hopes have been shattered completely.

Some historians say that an Armenian presence existed in Jerusalem since before the time of Jesus. The first Armenians in the Holy Land would have been soldiers marching with Armenia’s King Tigranes 2,000 years ago when the Romans ruled Judea – and some never left.

Two of Jesus’ disciples are credited with bringing the Gospel as far north to Armenia: Bartholomew (Nathanael) and Thaddeus (Judas, not Iscariot).

Some centuries later Armenia became the first nation to declare Christianity its national religion in 301 AD, and right away, Armenians began making pilgrimages to the Holy Land, inadvertently establishing the Armenian Quarter.

Since then, the Quarter maintained its vitality through centuries of crusaders and sultans, the Ottoman era, the British Mandate, Jordan and now the State of Israel. Armenian is the first language and is home to churches, a school, social clubs and a soccer field – all hidden behind the convent’s walls.

As refugees escaped the terrors of the Armenian Genocide, many of them found their way to established communities such as these across the Middle East. The wave of Armenians fleeing Turkey increased the population, and now, their children and grandchildren comprise the bulk of the residents who live here.

The number of Armenians living in Jerusalem has ebbed and flowed to a peak of between 16,000 to 25,000 in 1948, and dwindling again in recent years to approximately 2,000 or fewer.