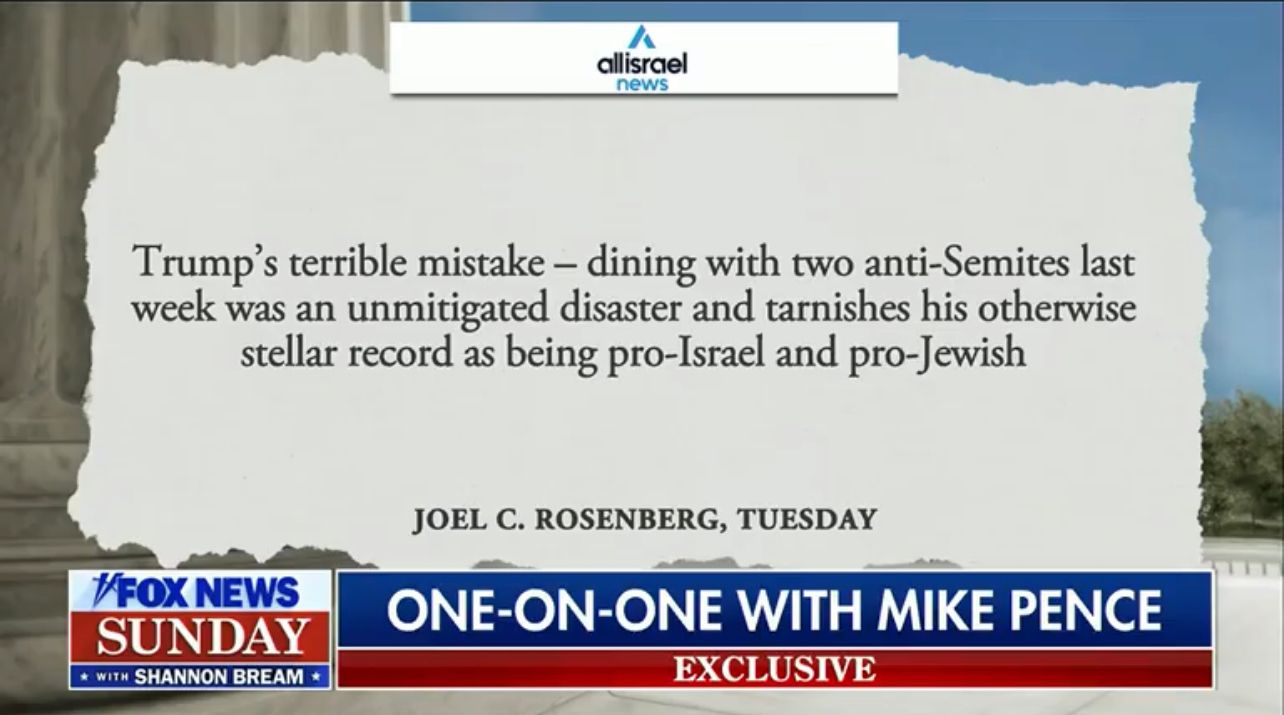 Bream then asked the former vice president whether this could disqualify Trump from seeking to become the president of the United States a second time.

“I think that’s a question for the American people,” Pence replied. “Anti-Semitism is real and it’s rising in many parts of the world. As I write in my book, I had the privilege of co-founding the anti-Semitism caucus on Capitol Hill with the late Tom Lantos, who is the only Holocaust survivor ever to serve in the Congress of the United States.”

“I think it is important for those of us who have had the opportunity to serve our country or aspire to serve our country in high national office, to make it clear that there is no place in the American political debate for White Nationalism, for Holocaust deniers or for anti-Semitism,” Pence said.

“I made it clear that the president was wrong to give anti-Semites a seat at the table. It was wrong for Barack Obama to associate with Louis Farrakhan. I think now more than ever, we need to make it clear that we reject anti-Semitism left, right and center,” Pence told Bream.

Last week on NewsNation, Pence called on Trump to apologize for hosting West and Fuentes, as well as to denounce both of them and their hateful rhetoric.

“With that being said, I don’t believe Donald Trump is an anti-Semite. I don’t believe he’s a racist or a bigot. I would not have been his vice president if he was,” Pence noted.

“And, you know, people often forget the president’s daughter converted to Judaism. His son-in-law is a devout Jew. His grandchildren are Jewish,” he said. “You know the broad brush of attack that [the] media leveled at him – but I think the president demonstrated profoundly poor judgment in giving those individuals a seat at the table. And, as I said, I think he should apologize for it. He should denounce them without qualification.”

Since Pence’s comments, Trump said he did not know who Fuentes was when he met with him in Florida; Fuentes himself later confirmed that claim in an interview, according to NBC News.

The network stated that, following the backlash, Trump’s campaign is now issuing “new vetting procedures and gatekeeping efforts as details emerge about how Fuentes and the former president found themselves at the same table.”