JERUSALEM – Few people outside of Israel have ever heard of him.

But Naftali Bennett is quickly becoming one of the most interesting and politically powerful leaders in Israel.

In January, ALL ISRAEL NEWS named Bennett #17 on our list of the 21 most interesting Israelis to keep an eye on in 2021.

Today, we would have to rank him much higher.

The latest polls show that Bennett and his Yamina (“Rightward”) party could emerge as the third largest after the March 23 elections, winning between 11 and 14 seats.

With the election shaping up between the “Pro-Netanyahu” camp (those who want Benjamin “Bibi” Netanyahu to remain prime minister) and the “Anti-Netanyahu” camp, Bennett is the only leader of a major political party who has not taken sides.

That’s why Israeli reporters are increasingly calling Bennett “The Kingmaker.”

Netanyahu can’t form a government without Bennett, but neither can the “Anti-Netanyahu” camp.

Both sides are going to have to court him aggressively once the ballots are counted.

Indeed, there is also the increasingly realistic prospect that if Netanyahu cannot form a government, the “Anti” camp may turn to Bennett and make him prime minister.

Sensing his moment in the political sun may have arrived, Bennett is doing a blitz, not only of Hebrew-language media interviews, but also English-language interviews.

His English is excellent. His parents are Americans from California who made aliyah and became Israeli citizens in the 1970s.

But Bennett is not simply “angling for Anglos” – he also trying to raise his international profile so more people around the world have some idea who he is before March 23. 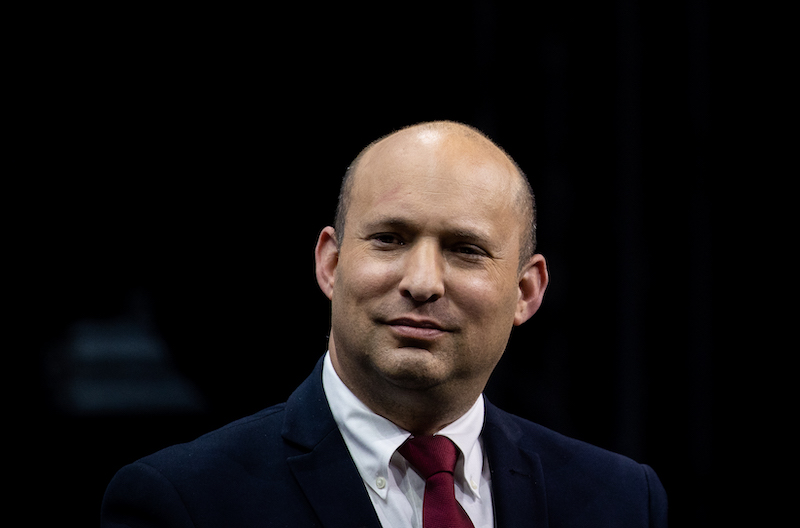 What’s intriguing to me is that, for the first time that I am aware of, Bennett has done an interview with a major Christian media outlet.

On Monday night, Bennett and his team invited Chris Mitchell, the Jerusalem bureau chief for the Christian Broadcasting Network, to his campaign headquarters in Ra'anana, near Tel Aviv.

The story ran Tuesday on CBN’s flagship program – The 700 Club – which is seen by some 1 million Evangelical Christians in the United States and Canada.

As I was also interviewed on The 700 Club on Tuesday, live from CBN’s Jerusalem studios, I saw Bennett’s interview.

I asked Mitchell if Bennett had ever appeared on CBN News. He had not, at least not in the past several years.

Smart move by the up-and-coming politician – and Bennett should do more.

Speaking to Christian media outlets will give this possible future prime minister a chance to speak directly to some of Israel’s strongest political and spiritual supporters.

“Naftali Bennett told CBN News he deeply values the support of evangelical Christians as the Jewish state faces existential threats from a nuclear Iran, a politicized International Criminal Court and the BDS movement,” Mitchell told ALL ISRAEL NEWS. “And he presented a serious case as to why he should be the next leader of the Jewish state.”

What CBN viewers learned was that Bennett is a devout Orthodox Jew who served in an elite special forces unit in the Israeli military. During his career, he founded a high-tech company that he later sold for $140 million.

Committed to forming “a stable right-wing government,” Bennett does not support the creation of a sovereign Palestinian state.

He is deeply worried about U.S. President Joe Biden’s efforts to negotiate a new nuclear deal with Iran.

He is the only major candidate in this race who has proposed sweeping pro-growth economic reforms to cut Israeli personal and corporate taxes and create 400,000 new jobs to get unemployed Israelis back to work after the COVID-19 shutdowns.

Bennett believes he is the right man at the right time for Israel’s right wing.

“Because of my unique position in the political scene where I don’t belong to any of the blocs – neither the pro-Bibi or anti-Bibi bloc – I’ve got the ability and leverage to form a stable right-wing government that will represent the majority of Israelis which are right of center, but they also want change,” Bennett told CBN.

Is he ready to serve a prime minister?

“I’m ready to take that responsibility,” he said. “As former defense minister, former entrepreneur and CEO of companies, I think I’ve got what’s necessary to pull Israel out of this hole and sort of go to the next phase of Israel as the start-up nation.”

How does he see Biden’s efforts to craft a new deal with Iran?

“The deal is a bad deal. It’s a terrible deal, and I want to explain why.”

“It gives a false sense of confidence that you know, we’ve got Iran covered. But it doesn’t. In fact, the deal allows Iran to proceed to the very verge of acquiring not one nuclear weapon, but dozens, and all they need to do is to a press a button and they’ll have, within days, dozens of nuclear bombs.”

“TIME TO FIRE THE CEO”

The big question is whether Bennett is prepared to help Netanyahu stay in office or whether he is positioning himself to be Israel’s next prime minister.

There is no small amount of bad blood between Bennett and Bibi.

Having once served as chief of staff for Netanyahu before quitting and starting his own political party, Bennett later served as defense minister in Netanyahu’s government.

Until Bibi fired him.

Today, Bennett has a great deal of criticism of his former boss, even saying publicly that if Israel were a business it would be time to “fire the CEO.”

But Bennett has not formally ruled out helping Netanyahu form a new government.

Instead, he is keeping his options open.

With the political fortunes of Gideon Sa’ar and his center-right New Hope party apparently fading – polls in recent weeks show New Hope slipping from an estimated 13 seats to possibly just 9 or 10 seats – Bennett is increasingly the man to watch on the right.