There’s no question his Likud party will emerge as the largest faction in the next Knesset, likely earning between 28 to 30 seats out of the 120 total in the parliament.

Netanyahu’s problem, however – as I noted in a Feb. 24 column – is that the leaders of most other parties either vow, or strongly imply, that they will never join a coalition with him again. If they keep their word, Netanyahu may be unable to cobble together a coalition of at least 61 seats to become prime minister again.

Their problem, however, is that their parties are far behind Likud.

Here are the latest numbers from a Channel 12 survey.

The challenge for Lapid, Sa’ar and Bennett is that they all need to find a way to grow their poll numbers – and they only have three weeks left to do it.

They don’t need to overtake Likud, but they certainly are eager to close the gap and position themselves as the most plausible leader to form the next coalition government.

What’s more, polling is notoriously unreliable in Israel, as in other democracies.

Turnout on election day will be another key factor. It doesn’t matter whether a person says they lean toward voting for a certain candidate. The question is whether they will actually show up at the polls in the middle of a pandemic and cast their ballot.

Thus, the three most plausible successors to Bibi – as they see it – are hunting for additional votes wherever they can.

That’s why each is now angling for Anglos.

Most come from the U.S., Canada and Great Britain, though there are certainly many from South Africa, Australia, New Zealand and other English-speaking countries.

Over the last two weeks, the major candidates have been holding town hall meetings for Anglo voters, and doing major interviews with English-language Israeli media outlets.

BENNETT: I HAVE A PLAN TO CREATE “JOBS, JOBS, JOBS”

Naftali Bennett and his Yamina party do not have an English-language website.

But Bennett is doing lots of interviews in English both in Israel and with international media outlets that are read by Israelis. 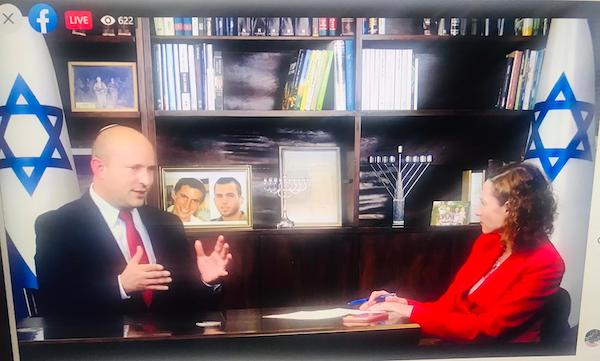 Stressing his American roots – he was born and raised in Israel, but also lived in New Jersey and elsewhere within the U.S. because both of his parents are Americans who made aliyah from California – Bennett made an impassioned case for why it is time for Israel to thank Netanyahu and move on to younger leadership.

Bennett is an impressive and energetic English speaker and former special forces commander who later built a high-tech company and sold it for $140 million. He said he understands entrepreneurship and has a detailed economic plan to cut taxes, streamline government bureaucracy, make housing more affordable and create “jobs, jobs, jobs.”

Bennett sharply criticized Bibi, for whom he used to serve as chief of staff, for his disastrous handling of the COVID-19 crisis and the economy, calling it “gross incompetence.”

“This should have been Israel’s finest hour,” Bennett said.

He noted that as defense minister, he prepared a detailed plan to deal with the pandemic, but that Netanyahu “ignored” the plan and later fired Bennett.

“I think he is afraid of me,” Bennett told Maayan Jaffe-Hoffman of the Post. “That’s not a good way to run things. I always empower people. You thrive by empowering people, not killing them.”

Netanyahu is presiding over “the worst government in Israel’s history,” Bennett said.

Bennett added that his agenda will dramatically benefit all Israelis, including Anglos.

“It’s not that Anglos need a unique approach,” he said. “All they need is a fair opportunity. I won’t do affirmative action for Anglos. I want Israel to be a meritocracy.”

Several days later Bennett did a fascinating hour-long sit-down interview in English with David Horovitz, editor of The Times of Israel, focusing on his pro-growth economic agenda.

“The main thing right now that I’m focused on is my Singapore [financial] plan, which effectively is to double the quality of life in Israel: by slashing taxes, Reagan style; by reducing government redundancy and fat; by requiring the public service to perform high-tech style – being measured; meeting objectives; basically running Israel competently,” Bennett said.

“I’m slashing taxes,” he promised. “People who pay 50% would pay 35%. How do you fund it? Massive growth, because we’re also going to slash corporate tax from 23% to 15%. So you’re going to see this gold rush to found companies, to grow companies. Then, instead of wasting the money on paying a million unemployed people their monthly stipends, all the money will go into growing the economy.”

Bottom line: Bennett’s case for replacing Netanyahu offers a bold, innovative economic agenda unlike any other candidate in the race.

SA’AR: “ONLY I CAN REPLACE NETANYAHU”

Gideon Sa’ar and his New Hope party have an easy-to-read-and-navigate website in English, including their 7 core principles.

Sa’ar speaks English well, but not nearly as passionate or energetic in his personal style and delivery as Bennett or Lapid.

He is more soft-spoken and circumspect. One might think this would be a liability. He sees it as a plus, in contrast with what he regards as Netanyahu’s perfect English, but slick politician’s presentation – too slick in Sa’ar’s view.

On Jan. 14, Sa’ar sat down with The Jerusalem Post for his first exclusive interview with the flagship English-language newspaper in Israel. It was published the following day. 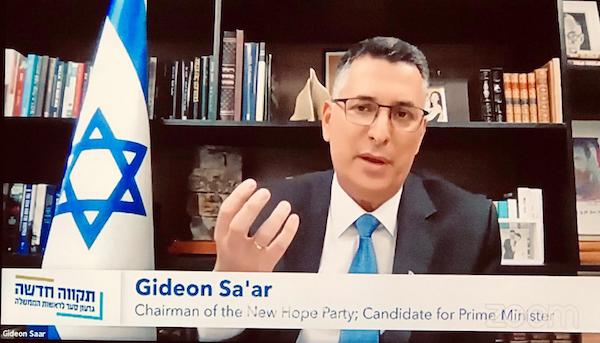 What became immediately clear is that Sa’ar is ideologically almost 100% in agreement with Netanyahu but offers a very different management and stylistic approach.

Like Bibi, Sa’ar is a center-right political figure, a lifelong Likudnik who wants Palestinians to have autonomy but only in a demilitarized territory, opposes a two-state solution, wants to expand the Abraham Accords, wants to revive Israel’s economy and wants to strengthen the U.S.-Israel alliance.

Sa’ar, however, portrays himself as the anti-Bibi – calm, respectful, professional, competent, honest and able to work better with Americans and his fellow Israeli government officials than Bibi has demonstrated in recent years.

He argues that Netanyahu’s refusal to even pass a basic budget in the midst of a pandemic and economic crisis – forcing the nation to a fourth round of elections in two years – is evidence that Netanyahu must move on and that Bibi is no longer focused on serving the needs of the nation, but only his political and legal survival.

“We are in a fourth election because the ability of the government to be stable will not be fixed until Netanyahu is replaced,” Sa’ar told the Post.

“Only I can replace Netanyahu,” he said.

Throughout numerous interviews, Sa’ar argues that Lapid is too far to the left and implies that Bennett – while a good and honest man – may be too far to the right to build a broad-based coalition.

On Jan. 15, Sa’ar spoke in an English-language interview with the Associated Press accusing Netanyahu of turning the Likud party into a “cult of personality” and saying that he – not Bibi – can work best with the Biden administration.

“I think I am in a better position than the prime minister to have an effective and true dialogue with…Biden and his administration,” he told the AP.

On Feb. 2, he spoke to the English-language news outlet, The Jewish Insider.

On Feb. 10, Sa’ar conducted a live online English-language interview with Robert Satloff, executive director of the Washington Institute for Near East Policy.

On Feb. 16, Sa’ar then did an English-language interview via Facebook Live with Lahav Harkov, a senior contributing editor for The Jerusalem Post, in another installment in the “Tel Aviv International Salon Election Series.”

Sa’ar told Harkov that he wants to impose term limits of eight years for prime minister, preventing people like Netanyahu from serving “forever.”

Bottom line: Sa’ar, who once was the second-most popular leader in the Likud party, is offering the country a simple bargain. If they vote for him to be the next prime minister, they will essentially get the exact same policy positions as Bibi – but a “kinder and gentler” version – who will methodically go about making the government work efficiently and effectively for all Israelis because he is not consumed with keeping himself out of prison.

LAPID LAYS THE MOST DETAILED POLICY AGENDA IN ENGLISH

Yair Lapid and his Yesh Atid party have laid out the most detailed policy agenda – focused on ten areas – of any major Israeli political party.

And it is available on the party’s website both in Hebrew and in English.

You may not agree with all of it – I don’t – but it’s impressive because it shows how much Lapid and his team have thought about the changes they want to make and how direct they are willing to be with voters about those plans.

Lapid is an excellent English speaker, personable and warm, a storyteller and very comfortable on screen as a former TV anchor.

Indeed, besides Netanyahu, Lapid may be the most effective English communicator on the Israeli political field. 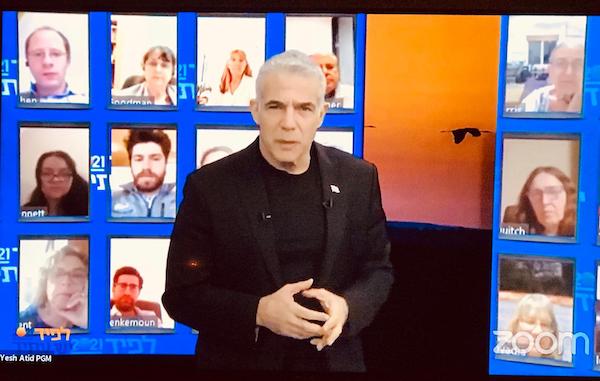 “My father taught me that an immigrant never takes anything for granted,” Lapid said during the forum. “You care more because life here didn’t just happen to you. It’s a choice you made [to move to Israel] and are committed to. I know I am talking to people who care very deeply about what is happening in Israel.”

As The Jerusalem Post reported, “After the event, Yesh Atid released ten campaign promises in English, including limiting the prime minister to two terms and the government to 18 ministers, funding an undergraduate degree for every student, passing a civil marriage and surrogacy bill and amending the Nation-State Law.”

On March 1, Lapid also conducted a live online English-language interview with Robert Satloff of the Washington Institute for Near East Policy.

One thing is clear in these interviews – Lapid refuses to accept the label that he is on the “left wing” or even the “center left” of Israel’s political spectrum.

He insists he is the only true centrist in the race, a down-the-middle moderate, as well as a far more experienced political party-builder than Sa’ar, who just launched New Hope last December, and Bennett who has been in and out of several parties in recent years and was briefly voted out of the Knesset not long ago following a series of political missteps.

Bottom line: Lapid is convinced that this is not an ideologically-based election. He thinks the country is looking to get rid of Bibi in order to get a budget passed, airports running, businesses re-opened and other practical, yet urgent, things completed. And Lapid argues that he is, therefore, the best positioned as a centrist to bring right-wing and left-wing parties together in a new “national unity” government.

On Feb. 13, Merav Michaeli – the new leader of the Labor party – did an online English-language interview with Gil Hoffman, the chief political correspondent for The Jerusalem Post. This was yet another installment in the “Tel Aviv International Salon Election Series.”

The Likud party has an English website which has not been updated since 2018.

On March 9, however, Netanyahu will be interviewed in English as part of the “Tel Aviv Salon International Election Series.”