Growing up in French Canada as a young Jewish boy, I found myself enchanted by nativity scenes. Walking home on snow-covered December evenings, I would gaze at winking blue Christmas lights woven around stately pine trees. I smiled to see green, red and golden wreaths hanging on many doors. And especially, my heart was inexplicably warmed by glowing spotlights shining upon elegant wood carvings of a kneeling couple, a baby in a crèche, three wise men and assorted animals. For me, it seemed the very picture of domestic tranquility. Not Jewish, of course, but very sweet. For me, Christmas was not a Jewish holiday. But I was happy for the Gentiles who could enjoy it.

In order for us all to understand the context of that nativity scene, both Jew and Gentile could benefit by unpacking the historical background of what was going on in Jewish Bethlehem 2,000 years ago. Some light will be shed on the Jewish roots of Christmas, as well as illuminate prophetic aspects of a greater fulfillment in days soon to come.

This current calendar year is one of the rare times when Hanukkah and Christmas coincide – Christmas Eve falls on the seventh candle of the Festival of Lights. In modern Western society, the emphasis of Hanukkah has been placed on dreidels (spinning four-sided tops), latkes (potato pancakes) or sufganiyot (Israeli doughnuts), and nine-branched menorahs (candelabra). But the biblical and historical roots of the Festival of Dedication focus on different things. Here’s an article which goes into greater detail.

From 721 B.C. and onward the Jewish state would be conquered in succession by Assyria, Babylon, Persia, Egypt and Greece. The Greeks conquered Judea in 332 B.C., basing their rule initially in Ptolemaic Egypt, but later out of Seleucid Syria. The Jewish people were living in prophetic times, walking out Hosea’s prophecy in anguish of soul: “For the sons of Israel will live for many days without a king or leader, without sacrifice” (Hosea 3:4).

But eventually stalwart men and women of faith – the Maccabees – rose up in 167 B.C. against the Greek oppressors and defeated them. The Maccabees were descendants of Aaron and not of David: their biblical calling was to catalyze and lead pure worship at the Temple in Jerusalem, and to teach the Jewish people the Scriptures (see Deuteronomy 17:9-13). The Bible declares that David’s dynasty was established by YHVH to be the royal rulers of the sons of Jacob forever (2 Samuel 7:12-16; Jeremiah 33:22-26). Nevertheless, the Maccabees were men of faith, fighting the wars of the Lord against the pagan Greeks: “The people who know their God will firmly resist” (Daniel 11:32-35).

Yet within 63 years, according to Josephus [Jewish Antiquities, xiii. 301] in 104 B.C. the Maccabean High Priest Judah Aristobulus the First “was the first to put a diadem on his head, four hundred and eighty-one years and three months after the time when the people were released from the Babylonian captivity and returned to their own country.” Aristobulus became the first non-Davidic ruler to claim both kingship and High Priesthood, violating the divine provisions of the Davidic Covenant.

Those Jewish people who were the remnant of Israel (see Romans 11:4-6) were horrified: the Maccabees (formerly defenders of Israel’s God and Temple) were now profaning the promises of YHVH and establishing a Greek-oriented kingship which ran roughshod over God’s word. No wonder that Josephus noted Aristobulus’ nickname in those days – Philhellene, or ‘lover of things Greek’ (Josephus, Antiquities, xiii. 318).

When Edom sat on David’s throne

The Maccabean kings ruled from 104 until 66 B.C.. But within a short time Julius Caesar appointed an Edomite (a descendant of Edom/Esau; see Genesis 36:6-8) named Antipater to be Roman Procurator of Judea (Josephus, Antiquities, 14.8.5). The Edomites are seen in the Bible as arch-enemies of the Jews – past, present and future (see Ezekiel 25:12-14; 35:14-15; 36:4-5). Antipater’s most famous son Herod the Great did not disappoint in this regard: “Antipater married a wife of an eminent family among the Arabians, whose name was Cypros, and had . . . sons born to him by her – Phasaelus, and Herod who was afterwards king” (Josephus, Wars, 1:8:9).

The son of Antipater, Herod the Great, was Edomite on his father’s side (biblical genealogy is always patrilineal) and Nabatean Arab on his mother’s side. When the Roman Senate crowned Herod the Great ‘King of the Jews’ in 40 B.C., this was now the second time since the Maccabees that a non-Davidic ruler was made king over the Jewish people.

Herod’s Edomite identity was a matter of common knowledge. Josephus quotes Herod’s rival Antigonus as countering Herod’s claim to the throne of the Jews, emphasizing that his bloodline was Edomite and not Jewish: “But Antigonus, by way of reply to what Herod had caused to be proclaimed, and this before the Romans . . . said, that ‘They would not do justly if they gave the Kingdom to Herod, who was no more than a private man, and an Idumean” (Josephus, Antiquities iv:15:2).

When Yeshua was born in Bethlehem, also known as ‘David’s City’ (see 1 Samuel 20:6; Luke 2:4, 11), an Edomite usurper was sitting on the throne promised to David and his seed. The irony of this situation was not lost on many Jews living in the land of Judea in that day. Had not Malachi recently declared YHVH’s words: “I have loved Jacob, but I have hated Esau and I have made his mountains a desolation” (Malachi 1:2-3; see also Romans 9:10-15). Yet the opposite of what Malachi prophesied seemed to be happening in Yeshua’s day: Esau was prospering, while Jacob was languishing.

The condition of David’s royal dynasty was in ruins, both geographically and genealogically. Amos had prophesied about these ruins, but his focus was on restoration of Davidic government and not on modern Charismatic worship. YHVH would restore a ruined Davidic dynasty on the soil of the Land of Israel, replete with palaces and walls: “On that day I will raise up the fallen shelter of David, and wall up its gaps. I will also raise up its ruins and rebuild it as in the days of old, so that they may possess the remnant of Edom and all the nations who are called by My name, declares YHVH who does this” (Amos 9:11-12).

Today, the majority of those who are known as Palestinians are of Edomite origin. The original jihadis on the mid-600’s A.D. added to the ethnic bouillabaisse the transfer of other Saudi Arabian tribes:

For more information, see chapter 18 of ‘Jews, Arabs and the Middle East – a Messianic perspective.’

Esau I have loved, but Jacob I have hated

Yeshua was born in a manger, a Latin-based word meaning ‘a feeding trough.’ No parents in their right mind would have chosen such a scenario. Yosef and Miriam (better known these days as Joseph and Mary) had arrived in Bethlehem to register in the Roman census (Luke 2:1-6a). They probably stayed in that town for a bit of time, but “while they were there, the days were completed for her to give birth” (Luke 2:6b). There was no room for them in Bethlehem’s caravanserai, and so they had to make do with a local stable which had a stone feeding trough or manger. It was primitive, unsanitary and humble, and not quite up to the level of the apartments in Buckingham Palace. An Edomite sits on David’s throne, while David’s Greater Son (see Matthew 22:42-45) is laid in a rough stone feeding trough.

Today the majority of the world’s nations vote continually against Israel at the United Nations, casting their ballots in favor of establishing an Edomite state alongside of (or in place of) a Jewish state. On Nov. 30, 2022, ninety nations cast a ‘yea’ vote in favor of holding a commemorative event in honor of the 75th Nakba, the PLO-chosen commemorative name for the fact of Israel’s establishment. Nakba is the Arabic word for ‘catastrophe.’ The nations are once again on record as seeing the restoration of Israel as a catastrophe. “Esau I have loved, but Jacob I have hated” – this spiritual dynamic has captured the hearts and minds of the nations of the world. It surely is time to pray for international repentance and God’s decisive justice.

Once upon a time, the Persians nearly carried out a complete genocide of the Jewish people under Haman. The Greeks made the following of the Jewish covenants a crime punishable by death. The Romans destroyed the Second Temple. forbade circumcision and exiled most remaining Jews to the far corners of the empire. Today the nations of the world refuse to recognize YHVH’s restoration of the Jewish people to their country and their Holy City.  Hatred remains, certainly – but YHVH has the last word.

A handful of months before Yeshua was born, a Jewish woman named Miriam spoke out an astounding prophecy: YHVH will fulfill every good promise spoken over the sons and daughters of Jacob, and will bring down to the ground all nations and superpowers who raise their hand (or their vote) against Israel:

He has brought down rulers from their thrones, and has exalted those who were humble.

He has filled the hungry with good things, and sent the rich away empty-handed.

Just as He spoke to our fathers – to Abraham and his descendants forever” (Luke 1:51-55)

On the eighth day after birth, when John the Immerser was to be circumcised, his father Zechariah was filled with the Holy Spirit and prophesied about how YHVH’s salvation would include the crushing of Israel’s enemies and the rescue of the Jewish people:

“Blessed be the Lord God of Israel, for He has visited us and accomplished redemption for His people,

salvation from our enemies, and from the hand of all who hate us;

to show covenant faithfulness to our fathers and to remember His holy covenant,

the oath which He swore to our father Abraham,

to grant us that we, being rescued from the hand of our enemies,

would serve Him without fear in holiness and righteousness before Him all our days” (Luke 1:67-75)

These emphases are highlighted and underscored by Yeshua’s parents and relatives. May they also be part of the Good News we proclaim at this season!

Let’s remember the prophetic prayer of an elderly Jewish man – one that he proclaimed in the Temple courtyard, for it still echoes down through the ages:

“Now, Lord, You are letting Your bond-servant depart in peace according to Your word. For my eyes have seen Your salvation, which You have prepared in the presence of all the peoples – a light for revelation for the Gentiles and the glory of Your people Israel” (Luke 2:29-32) 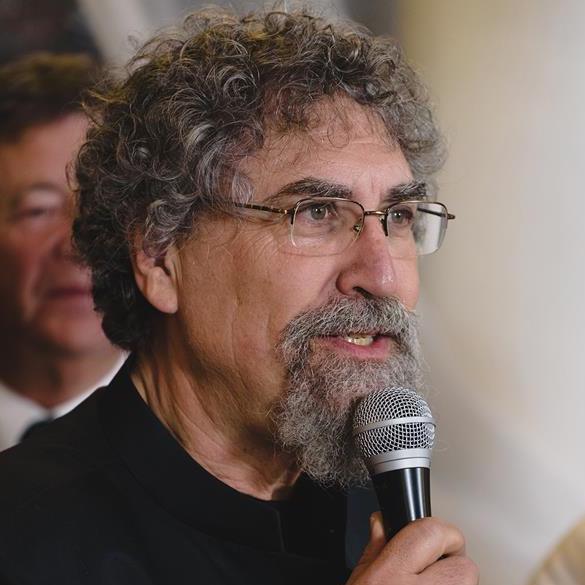 Avner lives in the Beersheva region of Israel. He has been involved for many years both in Israel and in many nations, in evangelism, Bible teaching, writing articles and books, creating original Messianic music, pastoral ministry and leading worship and prayer gatherings. He received a B.A. in Jewish Studies from McGill and Hebrew Universities, as well as a Th.M. from Dallas Theological Seminary. He worked as a licensed tour guide in Israel for over 20 years.