Belgium and Poland were ranked the least friendly countries overall to Jews, according to a new survey released Monday at the European Jewish Association (EJA) conference in Budapest.

The study, which found that Italy and Hungary were among the friendliest, was conducted in collaboration with the Institute for Jewish Policy Research (JPR), under the scientific direction of Dr. Daniel Steietsky. 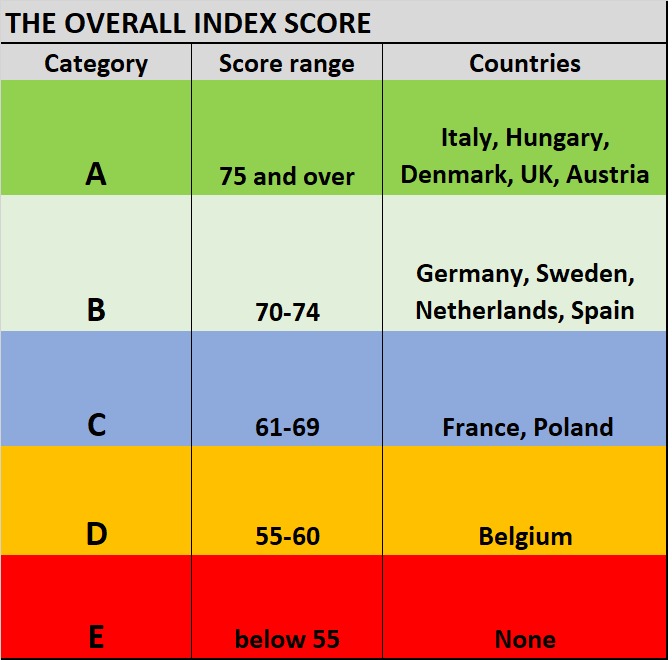 The questions and criteria for the survey were established in conjunction with Jewish community leaders and organizations in various European countries.

The study is not meant to “clash” with or “embarrass” any government, explained EJA Chairman Rabbi Menachem Margolin, but to create a comparative scientific infrastructure on the quality of Jewish life in different European countries. It was also meant to help states and community leaders gain practical advice on the steps they could take to help overcome the challenges Jews face in their countries today, he said.

Of the 12 countries where the most Jews live in Europe and that were included in the survey, they were specifically ranked as follows – from most friendly to least friendly to their Jews: 1) Italy, 2) Hungary, 3) Denmark, 4) United Kingdom, 5) Austria, 6) the Netherlands, 7) Sweden, 8) Germany, 9) Spain, 10) France, 11) Poland and 12) Belgium. 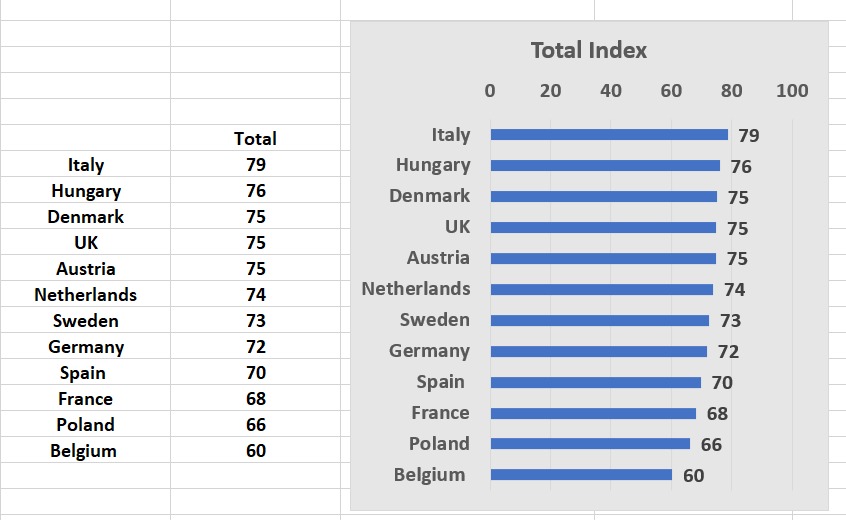 Overall, the survey looked at eight aspects of Jewish life: Budget for the security and protection of Jewish institutions; budget for support of Jewish culture, education and houses of worship; whether or not the state has adapted the International Holocaust Remembrance Alliance (IHRA) definition of anti-Semitism; policies around Holocaust commemoration; if an official was assigned the responsibility of fighting anti-Semitism on behalf of the state; if official systems are in place to monitor anti-Semitic incidents; religious freedom, such as around circumcision and ritual slaughter; and how the state votes in the United Nations on issues condemning the State of Israel.

The study also included a look at the steps that governments have taken to help Jews in their countries feel secure, the percentage of Jews who have experienced anti-Semitic incidents in person and the percentage of the public that holds negative views against Israel and the Jews.

In France, the sense of security for the Jews was ranked the shakiest. 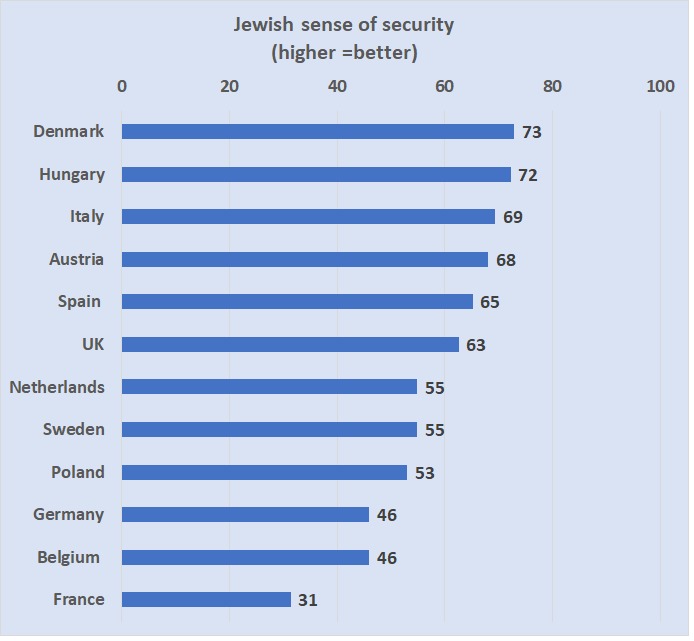 A spate of high-profile anti-Semitic attacks took place in France over the past decade, including perhaps the most well-known event, the shooting of a rabbi and three children at a Jewish school in Toulouse in 2012.

Nearly 40,000 French citizens have made Aliyah in the last decade, according to data published by the Jewish Agency – likely in part because of these incidents.

In recent years, the survey showed, the French government has taken extensive steps to ensure the existence of the Jewish community, which is expected to have a positive effect on the sense of security in future surveys, Margolin noted.

In contrast, Belgium is the country that takes the least action for Jewish life in the country. The Belgian government has significantly reduced security around its Jewish community in recent years, banned kosher slaughter and threatened the issue of circumcision. The country also failed to appoint a coordinator for the fight against antisemitism.

Deputy Prime Minister of Hungary H.E. Mr. Zsolt Semjén was also among those who participated in the EJA conference and spoke about Belgium’s decision to ban kosher slaughter. He said that, “animal rights do not outweigh human rights to freedom of worship” and that he believes than “an anti-religious mark” is behind the ban.

The countries where Jews in Europe feel most secure are Denmark and Hungary, with Hungary also ranking first with the lowest number of Jews experiencing anti-Semitic attacks, followed by Italy.

Rabbi Shlomo Koves, chief rabbi of Associations of Hungarian Jewish Communities, said that in recent years Hungarian Jews have felt that their situation in the country is improving.

“Joint and intensive work by both the Jewish community and the Hungarian government, which includes constitutional changes, the police's focus on dealing with antisemitic incidents and other moves, has over the years led to a significant improvement in the security of Jews,” Kovesh said. “The Jewish community and the government are also working hand in hand to change the public attitude towards Jews. It is a process that takes time, and maybe even generations.” 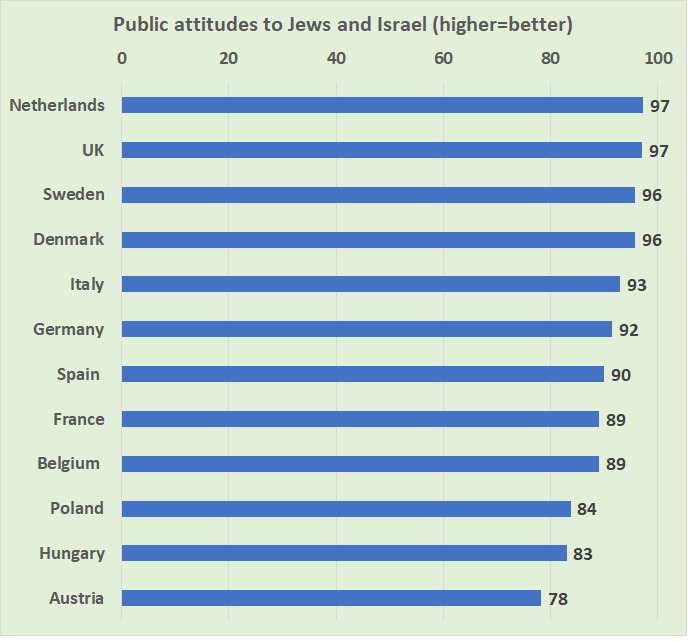 With regards to the European governments that are doing the most for the benefit of the Jewish communities in the various countries, Germany ranked No. 1, followed by 2) Austria, 3) France, 4) the Netherlands, 5) Italy, 6) Sweden, 7) Hungary, 8) the United Kingdom, 9) Poland, 10) Denmark, 11) Spain and 12) Belgian.

“The fact that there are residents who smile at us on the street and there is a general feeling that the government listens to the needs of the community and there is no existential anxiety on a daily basis, does not mean that the state does its best to ensure the development of the Jewish community,” Margolin said on Monday. “For example, Belgium is a country where the inhabitants are generally satisfied, but when you go into details, you see that the country does the least for the continuation of Jewish life in Europe compared to all other European countries.”

On a more positive note, Margolin noted that there was no country that scored below a 60, meaning that there is no country in which there is “a tangible danger to the life of the Jewish community in the near term.”

Steietsky said the goal is to repeat the survey and fine-tune the criteria in order to be able to gain a better perspective on trends in European Jewish life, as well as to work with governments to enable better tracking of the answers to the questions being considered.

The annual EJA conference was held this year in collaboration with the Hungarian Jewish Communities Association, as well as the Paris Consistory, the Jewish Agency and includes representatives of the Jewish communities of England, Ukraine, Poland, the Netherlands and more.