The presidential inauguration is going to be vastly different in 2021 from the traditional ceremony we are used to seeing.

With road closures and barricades, the atmosphere is extremely militarized. Some 25,000 National Guard troops — more than there are soldiers deployed in Afghanistan and Iraq — are present in Washington D.C. this week. 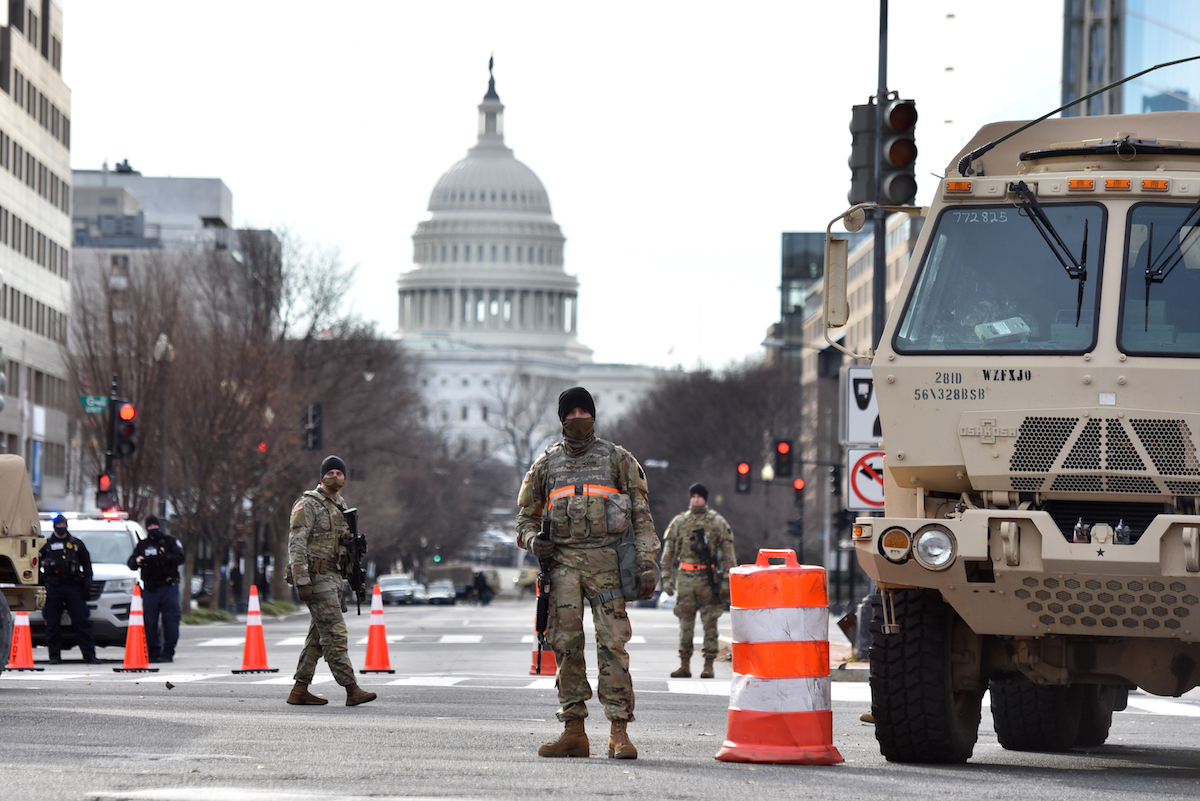 Members of the National Guard block off an intersection at New Jersey Avenue NW and Massachusetts Avenue NW, near the U.S. Capitol on Jan. 17, 2021. (Photo: Amy Newman-NorthJersey.com via USA TODAY NETWORK)

The National Guard was called in to supplement other agencies including FBI, U.S. Secret Service, Department of Homeland Security, U.S. Capitol Police and D.C. Police.

The heavy security is in response to the deadly riots that unfolded on Jan. 6 when a mob broke into the U.S. Capitol Building. 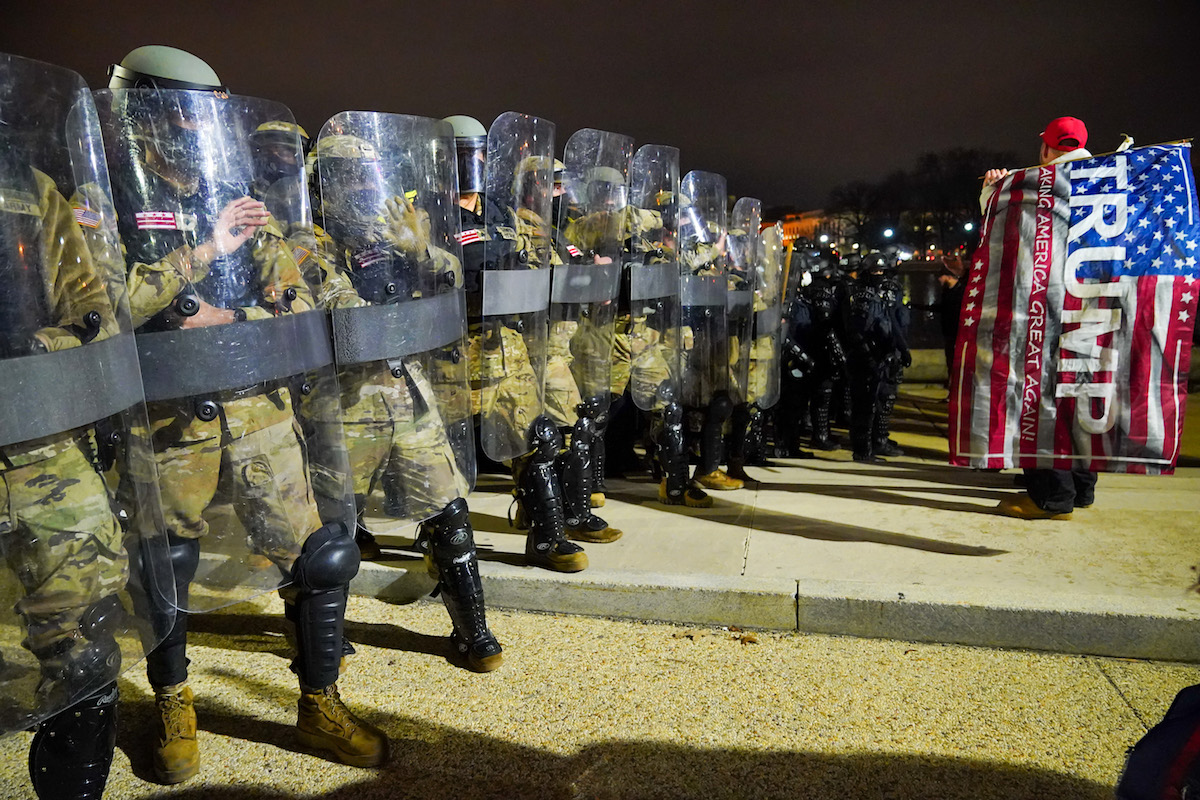 U.S. National Guard was activated to take back U.S. Capitol from the protestors who stormed the building on Jan. 6, 2021 (Photo: John Nacion / SOPA Images/Sipa USA)

The concern has turned D.C. into a war zone: Barbed wire, checkpoint, road barricades and guards with automatic weapons in America’s capital city. 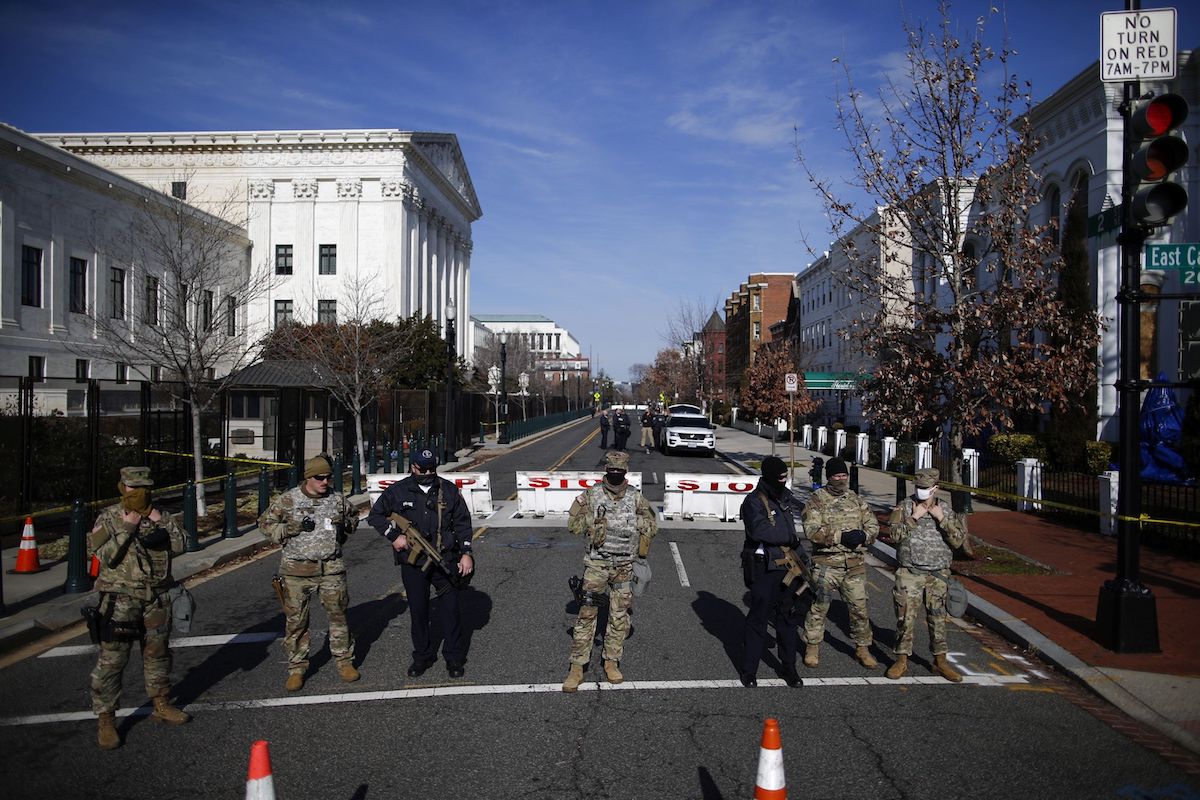 Members of the National Guard secure the area near the Capitol for possible protest ahead of U.S. President-elect Joe Biden's inauguration, in Washington, U.S., Jan. 16, 2021. (Photo: REUTERS/Eduardo Munoz) 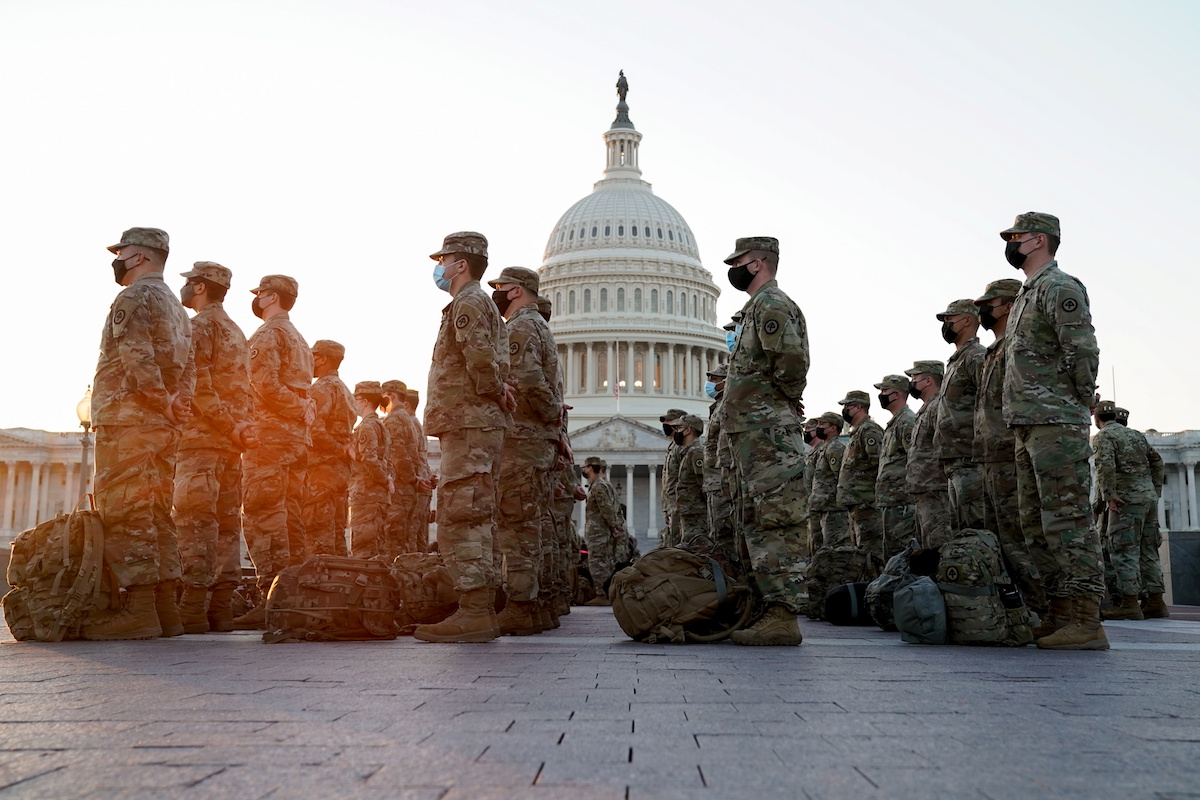 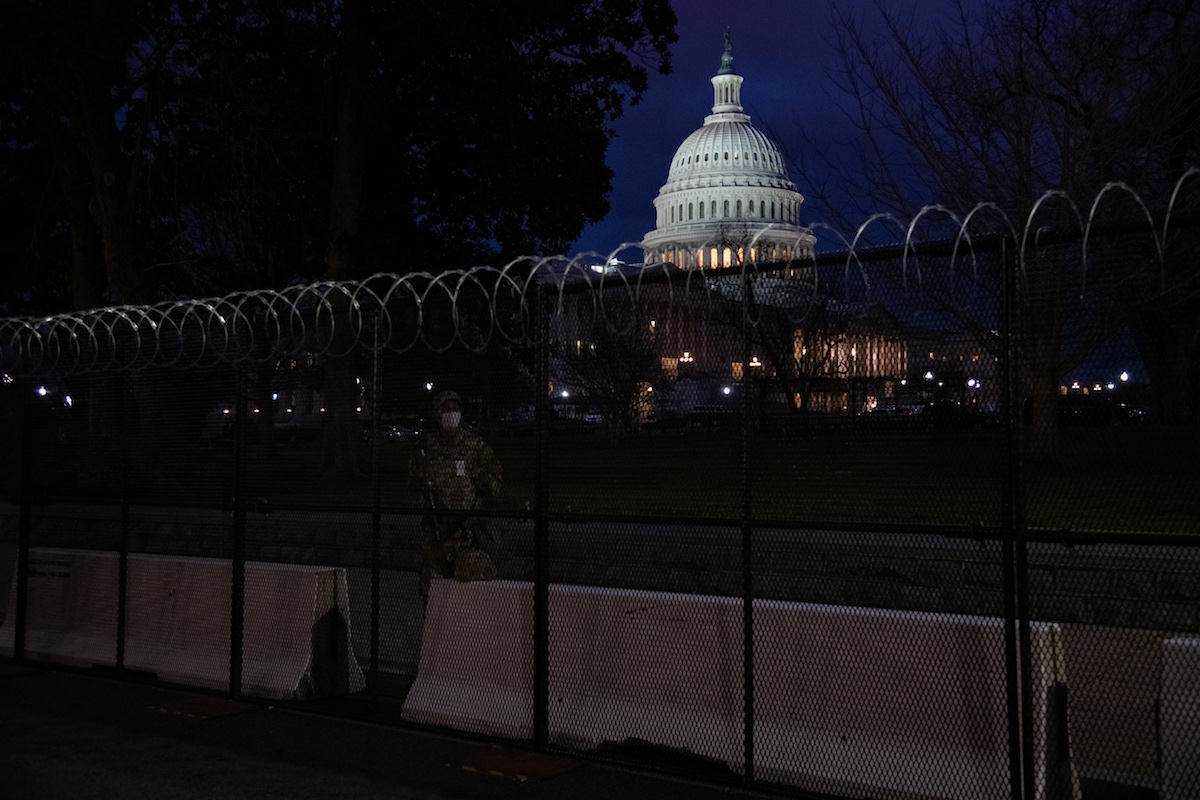 Barricade set up around the perimeter of the U.S. Capitol Building (Photo: Graeme Sloan/Sipa USA)

“It is a very secure event. We’re prepared for orders of magnitude or sorts of problems that happened on Jan. 6, and that was before Jan. 6, so America can be very confident this is going to be a safe, smooth inauguration and transition of power,” Cuccinelli said.

However, Sen. Rand Paul (R-Ky) told Fox News’ “Ingraham Angle” the government is overreacting because it under-reacted on Jan. 6 and now he is concerned about civil liberties of Americans coming under attack.

“I think there was too little security obviously last week, and now we’re going to become a militarized zone,” Paul said. “And they’re checking congressmen as they come in to see if they have a sharp pencil or a sharp pen. So, it’s gotten ridiculous. And so we’ll see what happens, and whether it’s permanent. But most people who write about civil liberties say that in times of war, or in times of stress, or in times of crisis, you lose your civil liberties very quickly.” 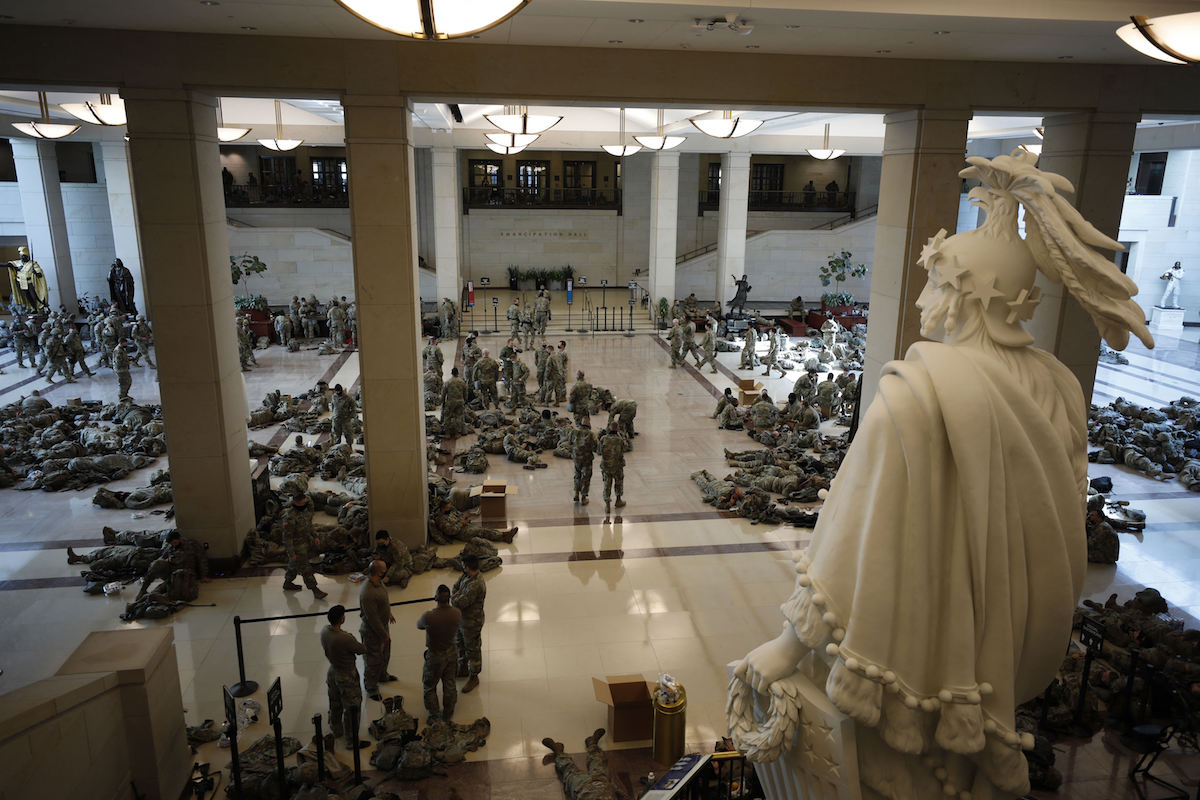 Members of the National Guard inside the U.S. Capitol during the impeachment debate and vote in Washington on Jan. 13, 2021. (Photo: Yuri Gripas/ABACAPRESS.COM)
Share: