Air Force One has touched down in Israel.

Rather than shake hands, Biden gave fist bumps to the members of the waiting delegation. A military band then played the American national anthem, The Star Spangled Banner, followed by Israel's anthem, HaTikva (The Hope).

As the official ceremony got underway, Herzog said Biden has arrived on a "trip of peace" to ensure security for the entire region. He compared the president, Joseph Biden, to the biblical Joseph.

In his welcoming remarks, Lapid said that Biden's visit shows a "commitment to shared values" and a recognition of "the right of the Jewish people to a state of their own."

"You once said you don't have to be a Jew to be a Zionist – and you were right. And in your case a great Zionist and the best friend Israel has ever known," Lapid said.

Biden, who has been to Israel 10 times, is now on his first visit as president. Lapid said he will see a vastly different and highly developed nation. He also said there would be time to speak about the Iranian nuclear threat, one of Israel's chief concerns. 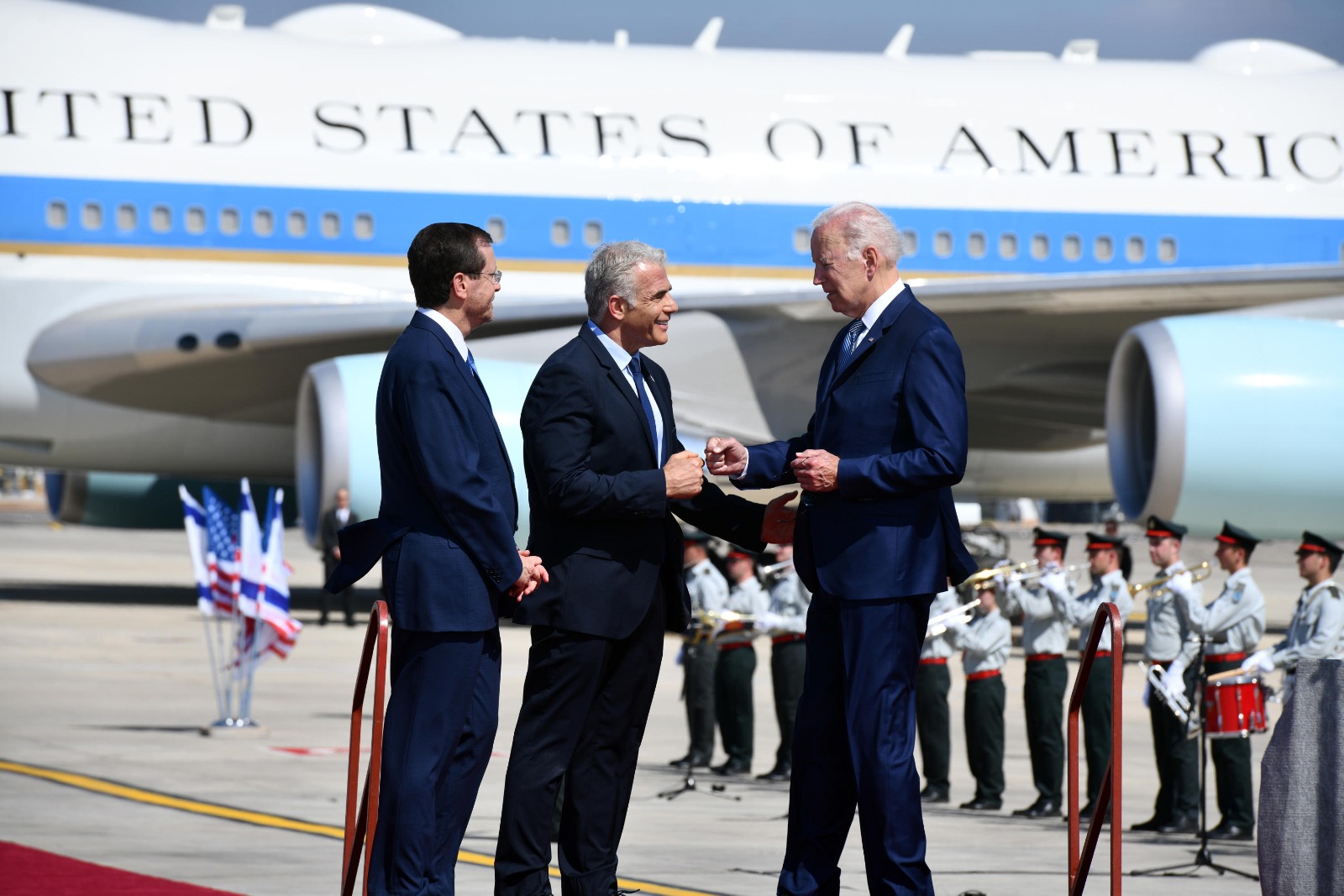 "We will discuss building a new security and economy architecture with the nations of the Middle East, following the Abraham Accords and the achievements of the Negev Summit," Lapid said. "And we will discuss the need to renew a strong global coalition that will stop the Iranian nuclear program."

Speaking next on the podium, Biden said this visit will strengthen America's commitment to Israel and advance Israel's integration into the region.

"Every chance to return to this great country.. is a blessing because the connection between the Israeli people and the American people is bone deep, bone deep," Biden said. "Generation after generation that connection grows."

"Greater peace, greater stability, greater connection – it's critical for all the people of the region," he said.

That is why during this trip, Biden said he will speak of the deep obligation to reaching a two-state solution.

After several photos, the short ceremony ended and the U.S. president got into a waiting limousine to head to his next stop – a hangar at the airport where Defense Minister Benny Gantz was to brief him on military cooperation and the results of American funding of Israel's defense systems.

All Israelis attending the ceremony at Ben-Gurion International Airport were required to undergo a COVID test before entering the facility, according to Channel 12 news.

Without any state dinners and few outdoor ceremonies, Biden's stay in Israel is considerably downsized for an official government visit. Citing the high-temperature weather, U.S. officials requested to shorten the greeting ceremony at the airport. 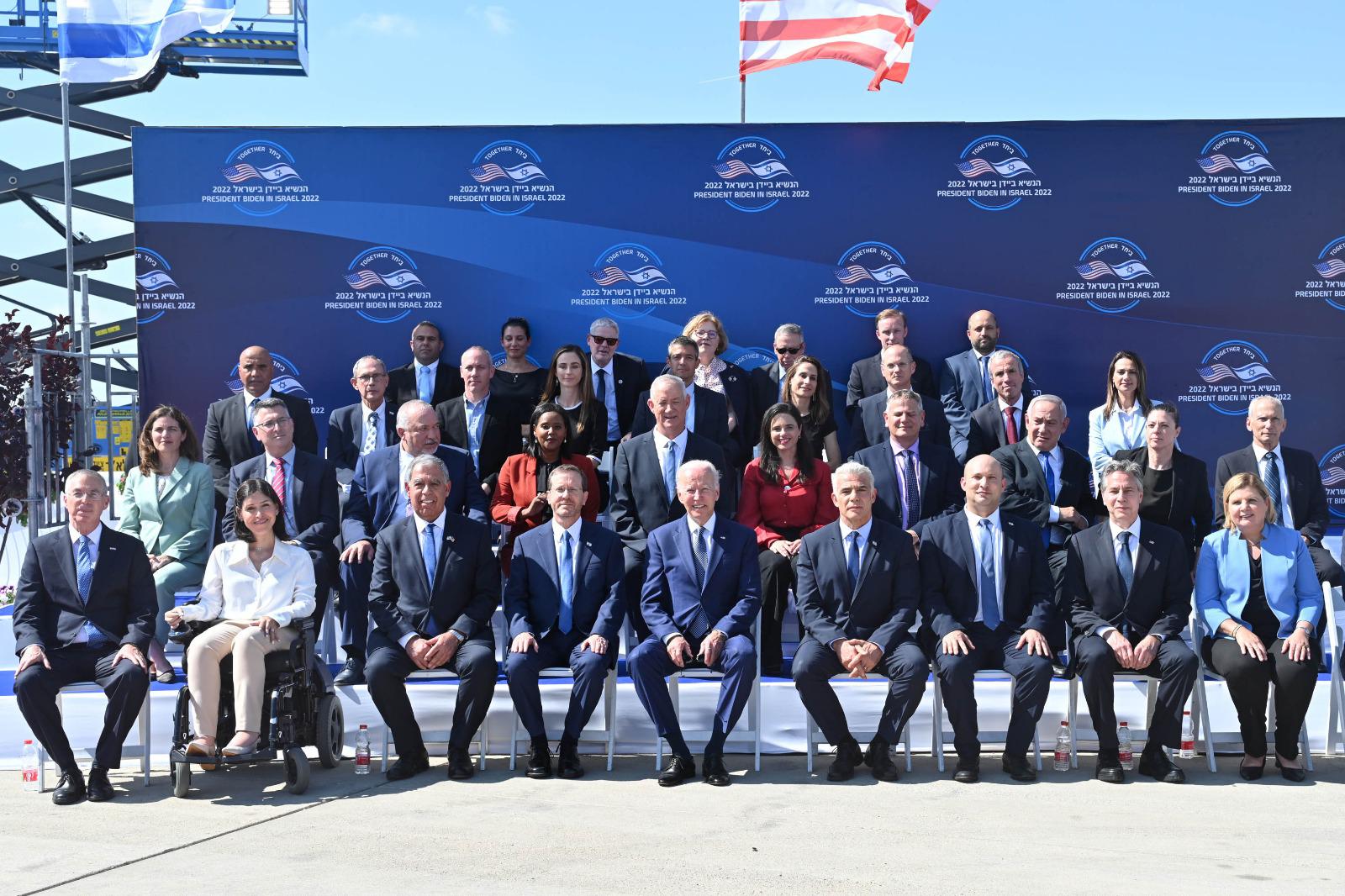 And instead of Biden heading to Palmachim Air Force Base as originally scheduled, the defense systems have been moved to the airport for the president to view.

Afterwards, he will head straight to Jerusalem to Yad Vashem, the Holocaust Memorial center.

Biden arrived with a delegation of 500, most of whom will stay at the King David Hotel in Jerusalem. The hotel was cleared out of other occupants in light of the American delegation.