The commander of the United Arab Emirates Air Force is in Israel on a first and historic high-level military visit that signals how quickly bilateral ties between the two nations have evolved in just over a year since signing the Abraham Accords.

“I thank you, commander of the Emirati Air Force, for your willingness to come to Israel. This is a historic and important day for cooperation between the air forces,” the Israeli Air Force commander said.

The Emiratis are interested in acquiring the advanced fifth-generation U.S. F35 fighter jet and former U.S. President Donald Trump reportedly offered to deliver the planes as part of the historic Arab-Israeli Abraham Accords in 2020. The Israel Air Force is currently the only Middle Eastern air force with operational F35 fighter jets and was reportedly the first air force in the world to deploy the new advanced fighter jet in battle in 2018.

Norkin invited his Emirati counterpart as a guest during Blue Flag, the largest-ever multinational military aerial exercise hosted by the Jewish state. The Blue Flag exercise, which has been organized every second year in the Israeli Negev Desert since 2013, keeps growing. The current Israeli-led international war-game simulation exercise includes more than 70 fighter jets and 1,500 air force personnel from around the world including the United States, Germany, France, United Kingdom and India. 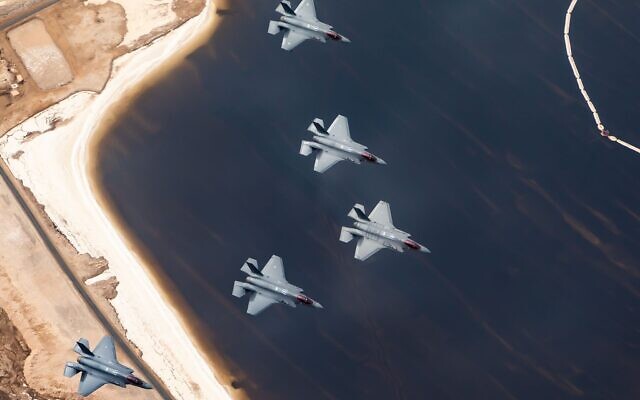 “We believe that holding the exercise has great strategic value for the Israeli Air Force and the State of Israel. As part of the exercise, we are hosting a day for senior officials on Tuesday, in which 11 air force chiefs from around the world will take part, including – for the first time – the head of the United Arab Emirates air force,” Lazar said.

In April, Israeli and Emirati fighter jets flew together for the first time during an international aerial exercise held in Greece.

Israel and the UAE both perceive the Iranian regime as a threat to peace and security in the Middle East. Israel reportedly recently approved $1.5 billion budget for a potential military strike on Iran’s nuclear sites. In addition, The Times of Israel reported on Monday that the Israel Air Force would resume training for this complex and risky military mission at the beginning of 2022. Some parts of Israel’s secret strike plan against Iran would reportedly become operational shortly while others would take longer to prepare, possibly a year or more.

The strikes against Iran’s nuclear sites are widely considered far more complex than Israel’s previous successful strikes against Iraq’s nuclear site in 1981 and against the Syrian nuclear site in 2007. Since the Iranian sites are spread out, fortified and to a large extent underground, it is unlikely that they could be taken out during one single military operation as was the case in Iraq and Syria. In addition, Israel needs to prepare itself for Iran’s advanced aerial defenses and missile attacks from its regional terrorist proxies such as Hezbollah in Lebanon and pro-Iranian militias in Syria, Iraq and Yemen.

With Iran repeatedly calling for the Jewish state’s destruction, Israeli leaders have said they will do what is needed in order to prevent Tehran from attaining a nuclear bomb.

“Iran’s nuclear program has hit a watershed moment, and so has our tolerance,” Israeli Prime Minister Naftali Bennett said during his United Nations speech in September. “Words do not stop centrifuges from spinning… We will not allow Iran to acquire a nuclear weapon.”