I feel the need to share in this article thoughts about one of the most important events in the history of mankind, in the hope that we can see this event with different eyes and have a new relationship with it.

Salvific, just and true are God's ways – but they are not our ways! And therein lies the challenge to our hearts. To behold the Messiah with our hearts like Simeon and Hannah, like Mary and Joseph, like the shepherds and the wise men from the East who paid their respects to the newborn is no small matter. It requires humble faith. For the King of grace and truth, the center of all creation, did not come as a powerful and glorious king to whom we would still have so willingly submitted. No, He was announced to strangers like the wise men from the East, to insignificant people like the shepherds, to the poor like Mary and Joseph, to the elderly like Simeon and Hannah. Not the influential, the powerful, the important in this world.

We in God's place would have done it the other way around, because we think and work in the structures of power possibilities of this world. The fact that God entrusts the most important message in the world to people who have nothing to offer, who live on the fringes of society, gives us a glimpse of the mystery of God's ways. A mystery that can only be fathomed with a humble and believing heart.

Addressed by the angel of God, the young woman of 17, at most 18, did not understand what was to happen to her. But she trusted God. Therefore, her answer was: "I am the Lord's handmaid. Let it be done to me as you have said" (Luke 1:37). Mary's faith had to go through the most painful trials imaginable in the time that followed. The woman who had been given the greatest honor God ever bestowed on a woman, the woman who carried the Messiah under her heart, was not saved from being seen as a dishonorable liar in the eyes of society. To conceive a child unmarried – and in addition to that, to claim that not a man but God was the father – that meant to pronounce judgment on oneself and to make a mockery of oneself. Her obedience to God made Mary an outsider in human society – marked and tainted.

Joseph, too, made a mockery of himself by his faith and obedience. His fiancée was pregnant – what a disgrace! Joseph was a righteous man. He planned to leave Mary secretly so that he would not have to accuse her publicly. For in doing so he would have to accuse her publicly. This would have exposed her to the usual sentence for adultery, stoning. He wanted to avoid this. After the angel assured him in a dream that Mary had told the truth, he exposed himself to the judgment of his fellow men. For from their point of view, he was marrying an adulteress. People are generally harsh and merciless in dealing with what they do not understand and does not correspond to their ideas.

God did not spare the young couple the humiliation of continuing to live as misunderstood outsiders in Nazareth. When the census was ordered and Joseph, as a descendant of David, had to travel to his hometown of Bethlehem, it meant for the heavily pregnant Mary to take the very arduous journey from Nazareth to Bethlehem under her feet. And also there they had to experience that they were unwanted. None of Joseph's relatives took them in. They could not find a place in the inn, which indicates that they must have been destitute. For with money everything can usually be arranged.

Thus, the greatest event of this creation took place in a stable. God's Son was born in nakedness, filth and cold, representing the wretched state of the human heart: poor, pitiless, cold. People did not want Him in their midst, as John says: "He came into His own, and His own did not receive" (John 1:11).

God had entrusted Himself to Mary and Joseph. They were honored by God to be very close to Him and to share in His pain, which this world inflicted on Him when it met their only Savior with coldness and rejection. Thus, the two of them experienced in their own bodies what Jesus later answered to someone who wanted to follow Him: "The Son of Man has nothing where to lay his head" (Luke 9:58). Mary and Joseph had to suffer the hardships of persecution along with Jesus. In Egypt, they lived as refugees and strangers far from home. Back in Israel, God sent them, not to Bethlehem, the City of David, or to Jerusalem, the center of power, but to Nazareth, that nest of nameless and apparently shady people of whom it was said, "Can anything good come out of Nazareth?"

What Mary really understood of God's plans, we do not know. What we do know is that she kept all God's words in her heart (Luke 2:19). She trusted God up to the incomprehensible and inconceivable, which went through her heart like a sword: up to the crucifixion of her Son, the Savior of the world promised by God!

GOD MEETS US WHERE WE ARE – IN THE STABLE

The stable is a central part of the birth of the Messiah – the place that we humans ascribe to God when He came to us. The stable represents the reality of man's heart. The reality of man is that he ended up as a prodigal son with the pigs – in the stable. His noise and rumbling in the taverns and palaces is only appearance, not being.

But in the stable not only truth became flesh, but also grace. About this God says to us: "I dwell on high and in the sanctuary, and with those who are of a bruised and humble spirit, that I may refresh the spirit of the humble and the heart of the brokenhearted" Isaiah 57:1). The stable is the place where we surrender and place the struggle for survival in God's hands. In the stable, wise men and kings say the same prayer as shepherds and slaves: "God, be merciful to me a sinner!" (Luke 18:13).

In the stable, God invites us to return home to Him. He offers to heal our life wounds, to take away our disappointments, to free us from inferiority and bitterness, to restore our destroyed relational capacity and broken relationships. By forgiving us, He helps us to forgive others as well and set them free from the prison of our accusation. He invites us to unload our burdens, worries and fears to Him and offers us to live in peace, tranquility and serenity instead.

The only requirement is to seek Jesus out in the stable and confess to him that we have ended up with the pigs. The stable is the meeting place with the saving and liberating God for everyone without distinction. It is accessible to everyone, regardless of origin, race or social status.

SALVATION FOR ISRAEL AND THE NATIONS

It is no accident that church tradition tells of the ox and donkey in the stable. The ox symbolizes the hard and laborious work of the nations who, by turning away from God, have placed themselves under the curse: "Cursed be the field for your sake.... in the sweat of your face you shall feed on it" (Genesis 3:17;19). This condition is embodied by the ox in the stable. The Messiah was born into this reality to deliver the nations from the curse.

The donkey, the mount of the Messiah, symbolizes stubbornness and defiance. It stands for the people of Israel. This people was called as a light for the nations to carry the Messiah to the nations (Isaiah 60:3), but they were stiff-necked and defiant and refused to obey. So Israel also ended up in the stable with the pigs. And it is only in the encounter with the King in the stable that Israel can experience redemption, liberation and restoration to its calling.

Whether Israel, the nations, or each one of us, it is only through the radical admission of our poverty that we can all behold the Messiah with our hearts and find peace. In the stable, grace and truth, reconciliation and forgiveness, joy and peace become a reality for all of us. Here we are allowed to come home because God himself has taken up residence among us and extends his arms to us in Jesus. Here, strangers and enemies become brothers and sisters: a family with a Father and a Savior. Immanuel, God with us! This is Christmas, the feast of the Nativity, which we want to celebrate with inexpressible joy. 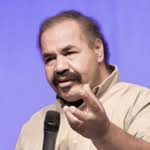 Marcel is the director of “Community of Reconciliation” (COR), which he founded in 1988. He came to Israel in 1994 with his wife Regula and their four now grown children. Marcel serves as an elder in a messianic congregation in Jerusalem. He is involved with other leaders in Jerusalem and nationwide, facilitating fellowship, unity and cooperative efforts to advance God’s purposes for the messianic body in Jerusalem and in Israel.