JERUSALEM—As 2023 begins, there are many reasons to feel like the world is spinning out of control.

War is raging in Ukraine. Nearly 250,000 people have died in the fighting there so far. A revolution is roiling in Iran. Nearly 7 million people worldwide have died from COVID-19. We’re seeing serious economic upheaval in the U.S. and around the world, as well as many other examples of social, religious and political upheaval. 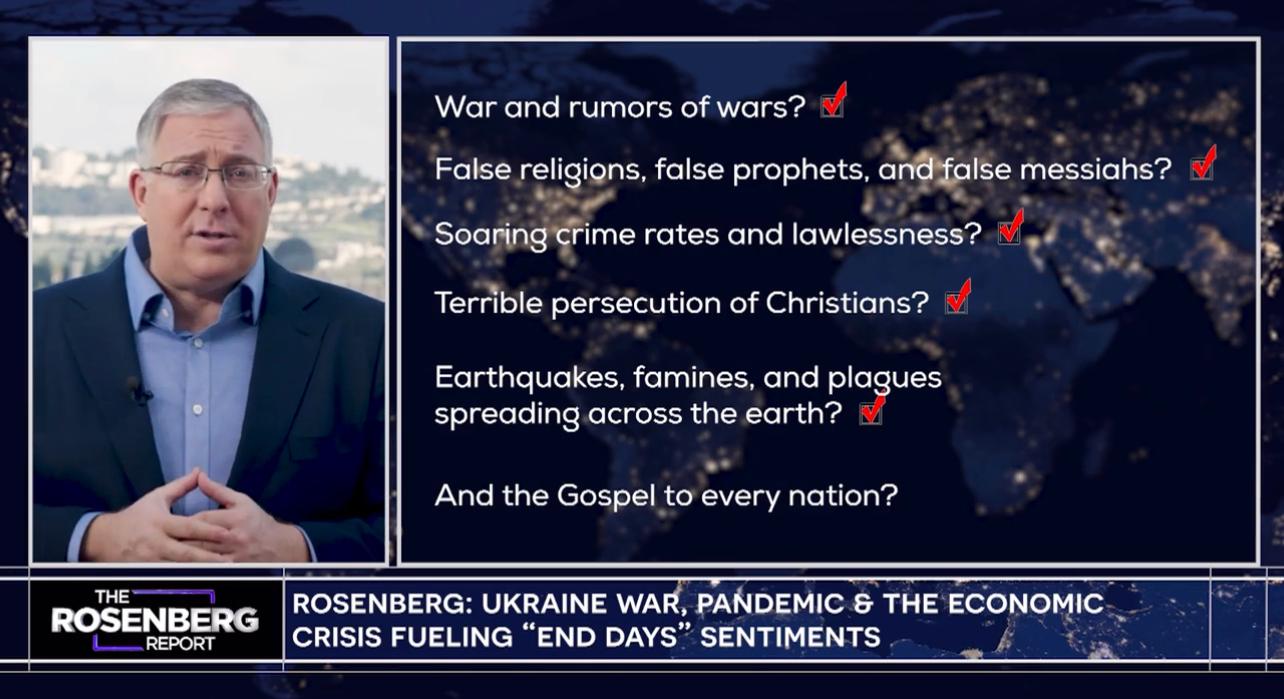 Perhaps it should not be surprising, then, that many are asking questions about the relevance of Bible prophecy in our times.

Yesterday, I reported about a fascinating poll that found nearly 40% of Americans – upwards of 103 million people – believe we are living in what Bible prophecy calls the “last days” of history.

My column drew upon a story I did on the first broadcast of THE ROSENBERG REPORT this year in which I unpacked a survey released in December by Pew Research in December.

Pew is one of the most respected polling firms in the United States.

Yet the survey results got almost no coverage in the mainstream media.

Nor did it get much attention in the Christian media.

DO YOU BELIEVE IN THE SECOND COMING OF CHRIST?

After all, researchers asked another intriguing Bible prophecy question.

“Do you believe that Jesus will return to Earth one day?”

What really shocked me was that Pew found that more than half of all Americans say “yes.” 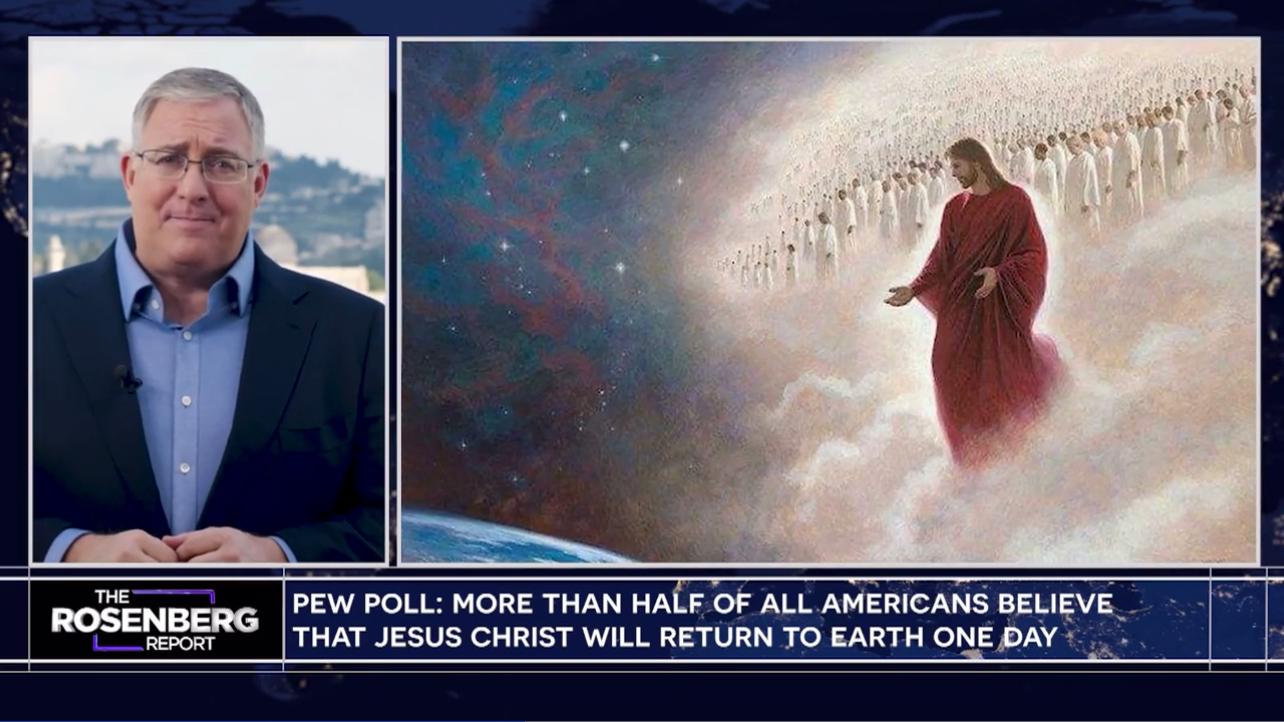 To be precise, 55% of all American adults aged 18 and over believe in the Second Coming of Christ.

And they don’t mean symbolically or metaphorically.

They mean they believe that Jesus is literally, physically going to return to Earth one day.

Possibly in our lifetime.

Now, the mainstream media might think such beliefs are ridiculous, crazy, wacky and not worth reporting.

Given how rarely Bible prophecy is taught in churches these days, and how many Americans are drifting away from the Church, that really is a shocking number. 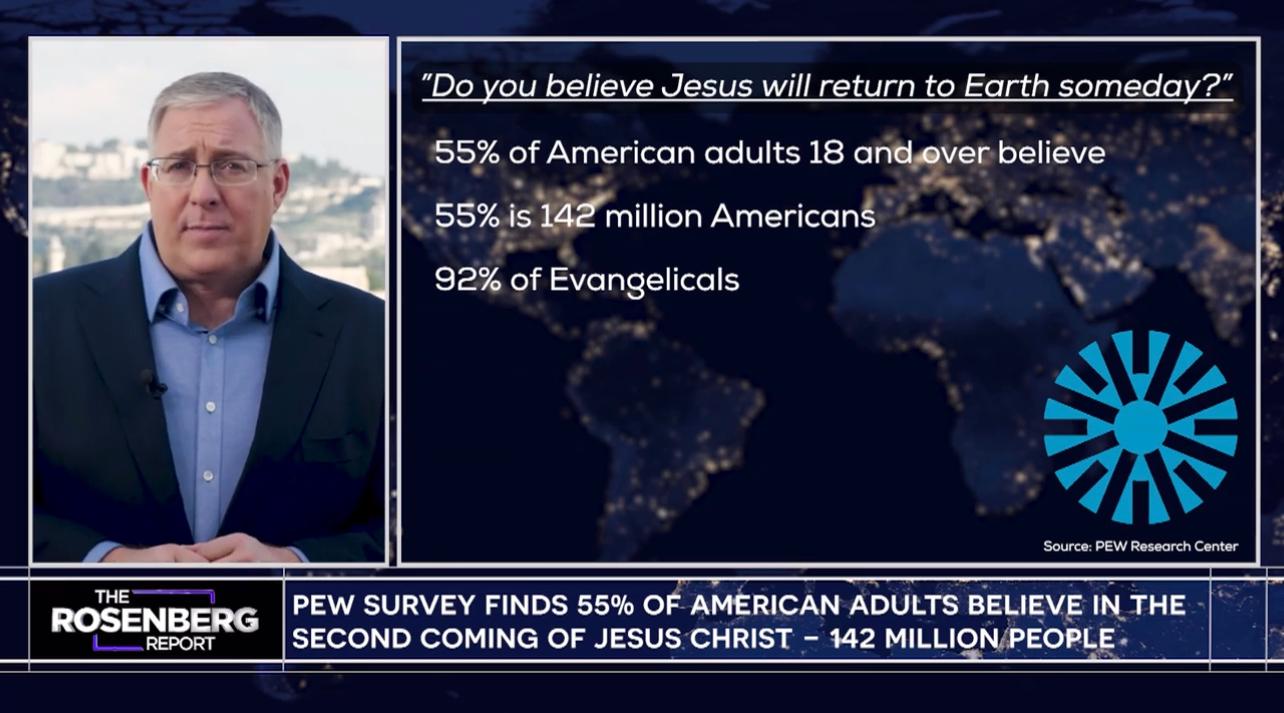 WHAT DOES THE NEW TESTAMENT TEACH ABOUT THE SECOND COMING?

Not surprisingly, the vast, vast majority of American Evangelicals – 92% – believe in the Second Coming.

After all, Jesus promised when He came the first time that He would come back again.

In the Gospel of Matthew, for example, Jesus told His disciples, “Therefore be on the alert, for you do not know which day your Lord is coming….For this reason you also must be ready; for the Son of Man is coming at an hour when you do not think He will.” (Matthew 24:42, 44

In the Gospel of John, Jesus told His disciples, “Do not let your heart be troubled; believe in God, believe also in Me. In My Father’s house are many dwelling places; if it were not so, I would have told you; for I go to prepare a place for you. If I go and prepare a place for you, I will come again and receive you to Myself, that where I am, there you may be also.” (John 14:1-3)

True, Jesus did not tell us exactly when He would return to Earth.

“But of that day and hour no one knows, not even the angels of heaven, nor the Son, but the Father alone.” (Matthew 24:36)

However, in the Book of Revelation, Christ made it clear that when He comes, He will come quickly.

“Behold, I am coming quickly, and My reward is with Me, to render to every man according to what he has done.” (Revelation 22:12)

Throughout the New Testament, the apostles repeatedly reaffirmed Christ’s promises to return.

In fact, as I noted on THE ROSENBERG REPORT, there are actually eight times more prophecies in the Bible regarding the Second Coming of Christ than His First Coming?

That’s right – for every prophecy in the Hebrew Scriptures concerning the First Coming of the Messiah, there are eight more prophecies telling us that the Messiah is coming back. 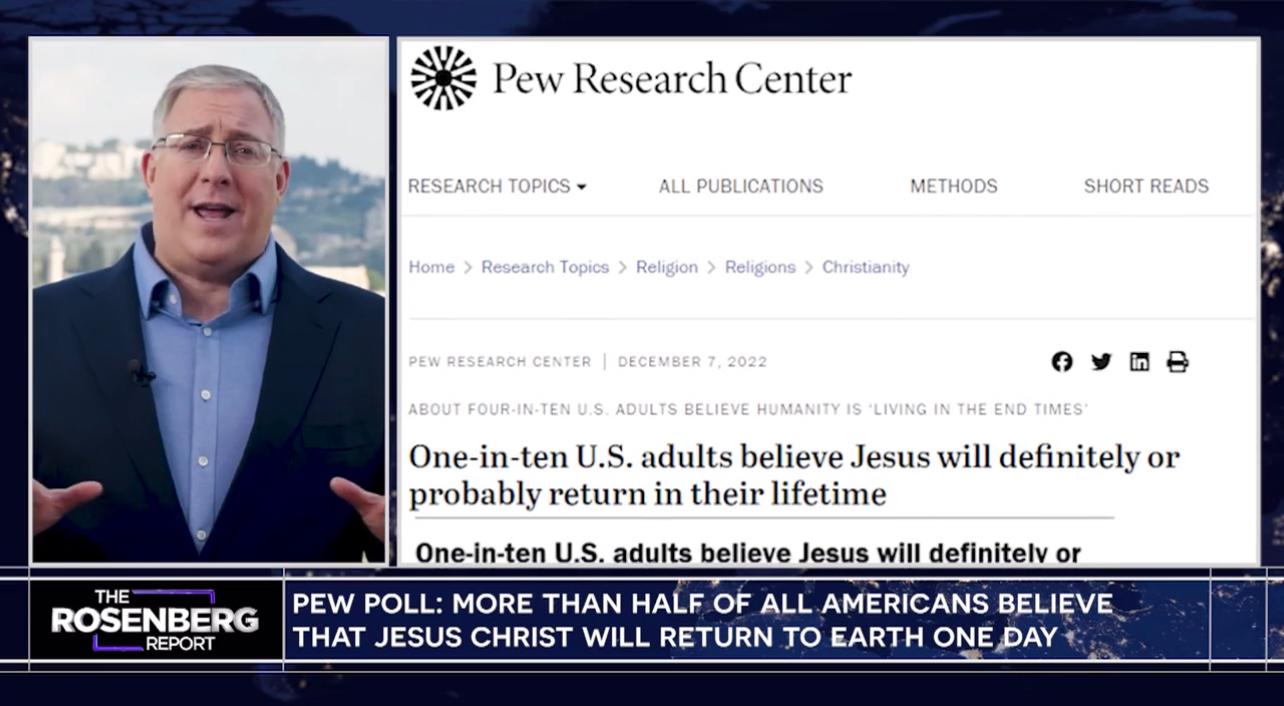 What really stunned me in the Pew study was how many non-Christians believe in the Second Coming of Christ.

In fact, 18% of Americans who are members of  “non-Christian religions” believe that Jesus is coming back to Earth one day.

This includes Muslims, Buddhists, Hindus, Jews and others.

The study doesn’t break down the numbers for each religion but most of these are undoubtedly Muslims.

After all, the Qur’an and other Islamic texts teach that Jesus is coming back one day.

That said, devout Muslims are taught from childhood that Jesus is coming back in the last days of history – not as the Savior or King of the world but as the deputy, or the lieutenant, to the one they call the “Mahdi” or the “Twelfth Imam.”

When we drill deeper into the numbers in the Pew study, things get even more interesting.

What’s more, 69% of all Republicans believe in the Second Coming.

Fully 45% of all Democrats believe that Jesus Christ is one day coming back to Earth. 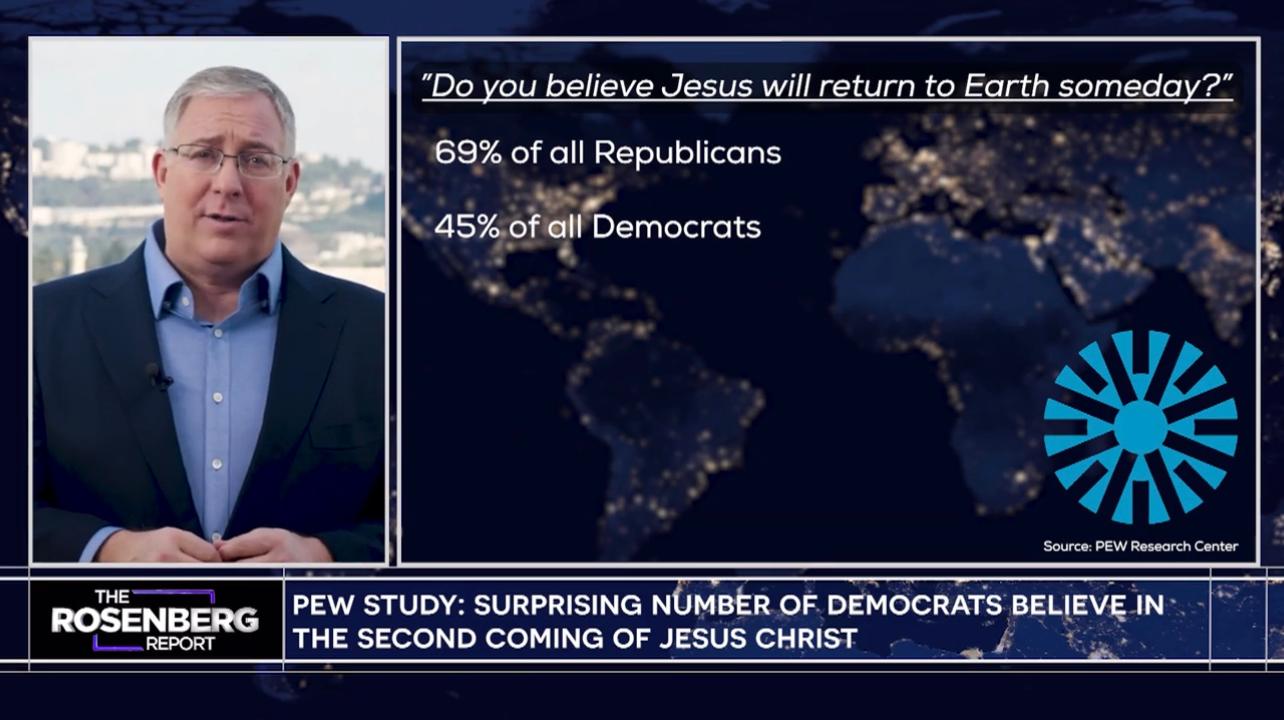 WHY DO SO MANY BELIEVE IF SO FEW PASTORS & PRIESTS ARE TEACHING BIBLE PROPHECY?

The big question is: Why?

Why do so many Americans believe we’re living in the last days – and that Jesus is coming back to Earth, possibly in our lifetime?

Many Christian pastors and priests have stopped preaching Bible prophecy. They’ve stopped talking about prophecies regarding the last days and teaching about the hope of Christ’s Second coming. Some don’t believe it. Some don’t understand it. Others simply don’t care.

The mainstream media certainly isn’t talking about such things. I mean, seriously, are you going to hear any of this on CNN, MSNBC, the NBC Nightly News, or “60 Minutes”? Of course not, unless it’s to mock those of us who take it seriously.

And yet, a solid majority of Americans tell pollsters that they really do believe Christ will return, even if they have no idea when.

Some of this is the residue of what Americans were taught before they stopped going to church, before pastors stopped preaching the “Blessed Hope” of Christ’s return and the glorious Kingdom He will one day set up for those who believe.

Yet I believe the Holy Spirit is also stirring people’s hearts to long for the day that the Messiah will return to make all things right.

And this poll reinforces my belief that, as this world seems to spin out of control, many will be curious to know what God says about the future and why it matters.

They just don’t know where to turn.

So, throughout 2023, I plan to write an ongoing series of columns about Bible prophecy.

He wants us to understand what’s coming next.

That’s what Bible prophecy is – an intercept from the mind of the all-knowing, all-seeing, all-powerful God of the universe. It’s news from the future to help us live with more courage, boldness, and holiness today.

The mainstream media couldn’t care less – but I do.

And I suspect you do, too.

Because if we really are living in the “last days” – if Christ really is coming back soon to judge the quick and the dead – then you and I need to be ready, and found faithful.