JERUSALEM—Are we living in what Bible prophecy calls the “last days” of history?

And is Jesus Christ really going to return to Earth one day – not spiritually or symbolically or metaphorically, but literally and physically?

A fascinating new survey finds a huge number of Americans of all races, religions, and political persuasions say “yes” to both questions.

In the first broadcast of THE ROSENBERG REPORT on TBN of 2023, I began the new year by unpacking the new study released by Pew Research in December.

The poll got almost no coverage in the mainstream media.

Nor did it get much attention in the Christian media.

But that’s exactly why we launched THE ROSENBERG REPORT on TBN, the world’s most-watched Christian TV network – to bring you the stories that others won’t.

In the first of a multi-part series on “Understanding The Times,” I’d like to begin by focusing on this question asked of 10,156 Americans by Pew.

“Do you believe we are living in the End Times?”

Now, it shouldn’t be surprising that some Americans believe we’re living in the last days.

What surprised me is how many believe this.

This wasn’t a survey of Christians only – and it wasn’t conducted by a Christian organization.

Pew is a non-religious and non-partisan research institutions in the United States – and one of the most respected.

And what they found is amazing.

Not surprisingly, 63% of Evangelicals believe this.

What is surprising is that 29% of Americans from “non-Christian religions” like Jews, Muslims, Buddhists, and Hindus believe it, too.

And 30% of Americans of “no particular religion.”

That includes 9% of atheists. 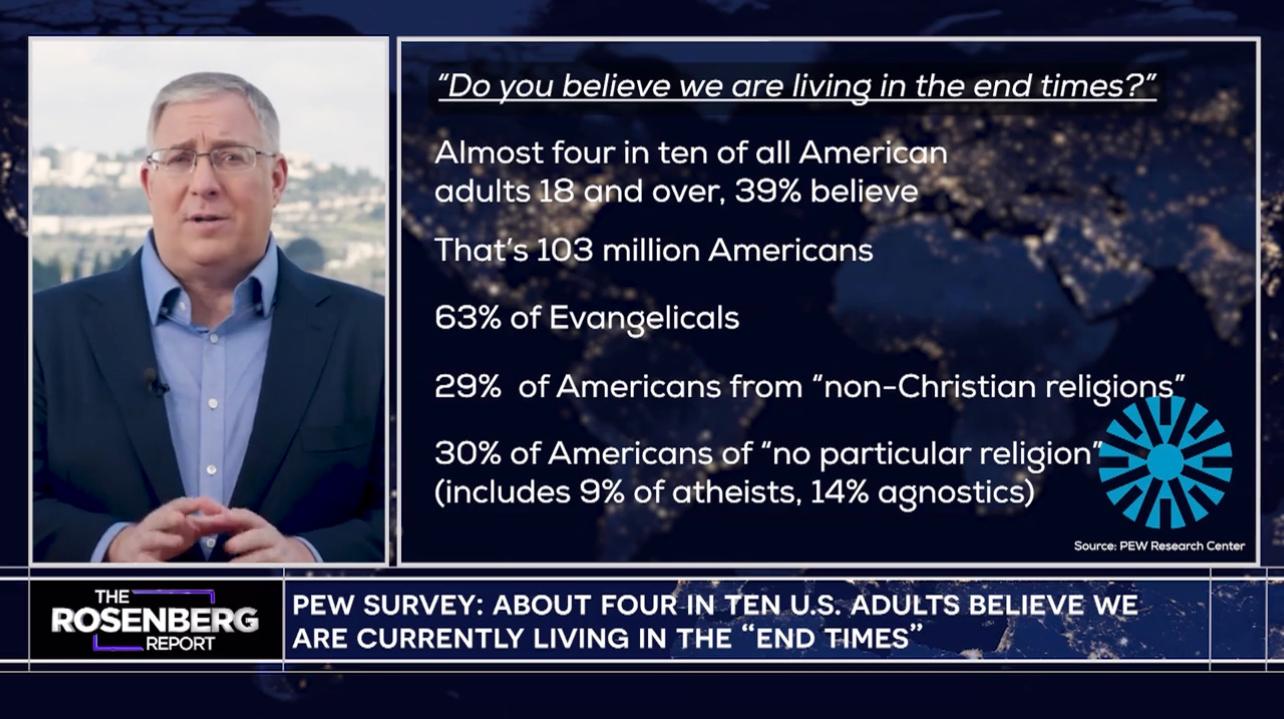 Screenshot from THE ROSENBERG REPORT on TBN

First, why do so many Americans believe the end of human history is near?

The death toll has been catastrophic.

Now, Vladimir Putin is threatening to use nuclear weapons.

And President Biden is warning that Putin could set into motion “Armageddon,” the biblical word for the “End of Days.” 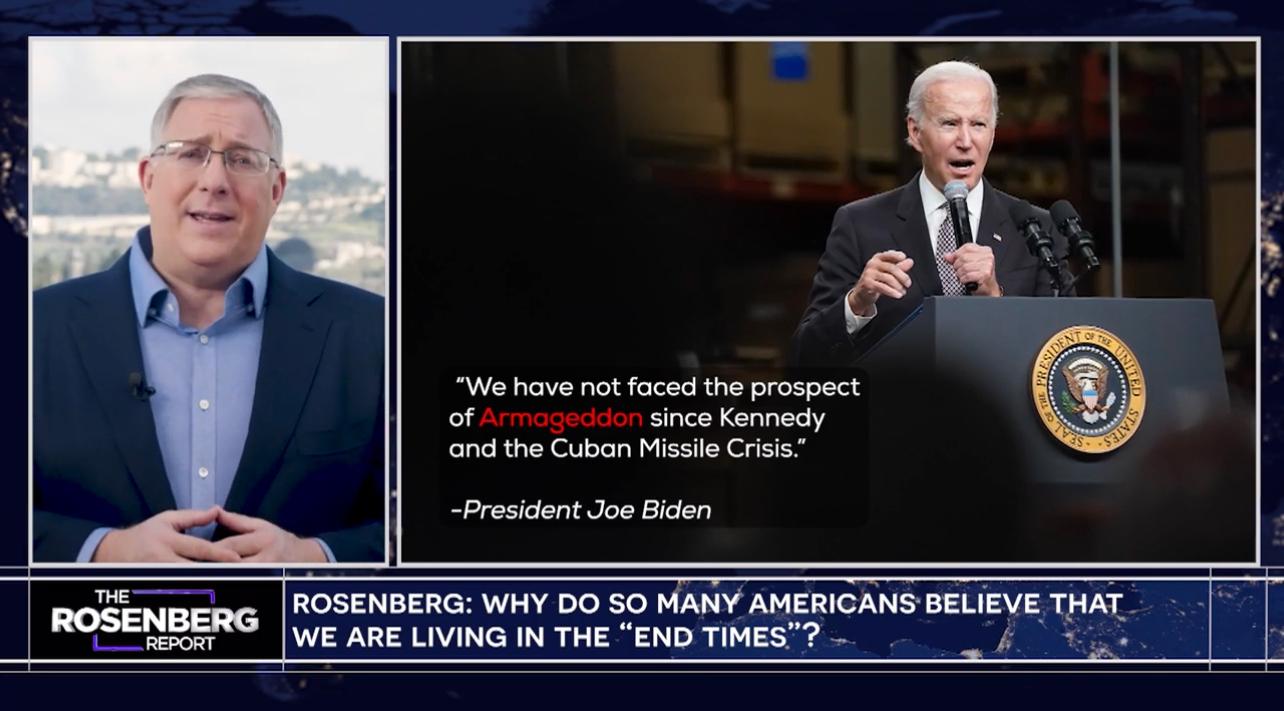 Screenshot from THE ROSENBERG REPORT on TBN

Inflation is surging, global economies are reeling, stock markets are tanking, and it’s not clear 2023 will be any better.

With so much upheaval, should it be surprising that so many people believe we are living in the “End Times”?

The second bigger question is: Are they right?

Not far from where I live here in Jerusalem is the Mount of Olives. That’s the exact location where Jesus told His disciples that the Second Temple would be destroyed – a prophecy that came true not long after Jesus said it.

That’s also where Jesus’ disciples asked Him, “Tell us, when will these things happen, and what will be the sign of Your coming, and of the end of the age?”

Now, Jesus could have given them a very Washington, political answer, “No comment, next question!”

Instead, Jesus gave His followers a detailed list of signs to watch for.

“You will be hearing of wars and rumors of wars. See that you are not frightened, for those things must take place, but that is not yet the end. For nation will rise against nation, and kingdom against kingdom, and in various places there will be famines and earthquakes. But all these things are merely the beginning of birth pangs. Then they will deliver you to tribulation, and will kill you, and you will be hated by all nations because of My name. At that time many will fall away and will betray one another and hate one another. Many false prophets will arise and will mislead many. Because lawlessness is increased, most people’s love will grow cold. But the one who endures to the end, he will be saved. This gospel of the kingdom shall be preached in the whole world as a testimony to all the nations, and then the end will come.” (Matthew 24:4-14)

“There will be…in various places plagues and famines and great signs from heaven….There will be signs in the sun and moon and stars, and on the earth dismay among nations, and perplexity at the roaring of the sea and the waves, men fainting from fear and the expectation of things which are coming upon the world….But when these things begin to take place, straighten up and lift up your heads, because your redemption is drawing near.” (Luke 21:10, 11, 25, 26, 28)

“Now learn the parable from the fig tree: when its branch has already become tender and puts forth its leaves, you know that summer is near. Even so, you too, when you see these things happening, recognize that He is near, right at the door. Truly, I say to you, this generation will not pass away until all these things take place.” (Mark 13:28-29)

Think about that list and how – one by one – we can check each item off as having happened or as happening right now.

That said, what Jesus said about the “parable of the fig tree” may be the most intriguing.

Because throughout the Old Testament, God uses the fig tree as a symbol of Israel. (I’ll do a column explaining that in more detail soon.)

So, Jesus is saying that when we see the rebirth of the State of Israel and Jews returning to the Promised Land after centuries of exile – when we see all that happening together with the other End Times signs that Jesus listed – “recognize that He is near,” that His hand is right on the door, that He is just about to re-enter human history.

There’s no question we’re living in what the Bible calls “the End Times.”

The real question is: So what?

How are you and I going to live differently in light of this extraordinary truth?

Something worth pondering as we begin 2023.

Tomorrow: I will examine the results of the Pew survey regarding this question, “Do you believe Jesus will return to Earth one day?”