A rare bronze coin depicting the zodiac sign Cancer beneath a portrait of the moon goddess Luna was discovered off the Carmel Coast of Haifa, the Israel Antiquities Authority said on Monday.

The pagan coin was minted under the Emperor Antoninus Pius (138–161 A.D.) in Alexandria, Egypt. It bears the date “year eight,” which the authority said implies the eighth year of Antoninus Pius’ rule.

“This is the first time such a coin has been discovered off Israel’s coast and it is a rare addition to the National Treasures collection,” said Israel Antiquities Authority Maritime Archaeology Unit Director Jacob Sharvit.

Pius ruled immediately after the Bar Kokhba Revolt against the Romans in Jerusalem - the final war between the Jews and the Roman Empire, which took place around 132-136 A.D.

The Jews lost the war and were exiled from the Holy City of Jerusalem, which was turned into a pagan city. According to tradition, the only time they were able to enter Jerusalem was to mourn their losses in the revolt on the ninth of the Hebrew month of Av - the same day on the Hebrew calendar that the First and Second Jewish Temples fell.

The coin is exceptionally well-preserved, despite its being lost at sea for thousands of years. Coins like this one, Shavit said, “are extremely rare and their discovery completes parts of the historical puzzle of the country’s past. 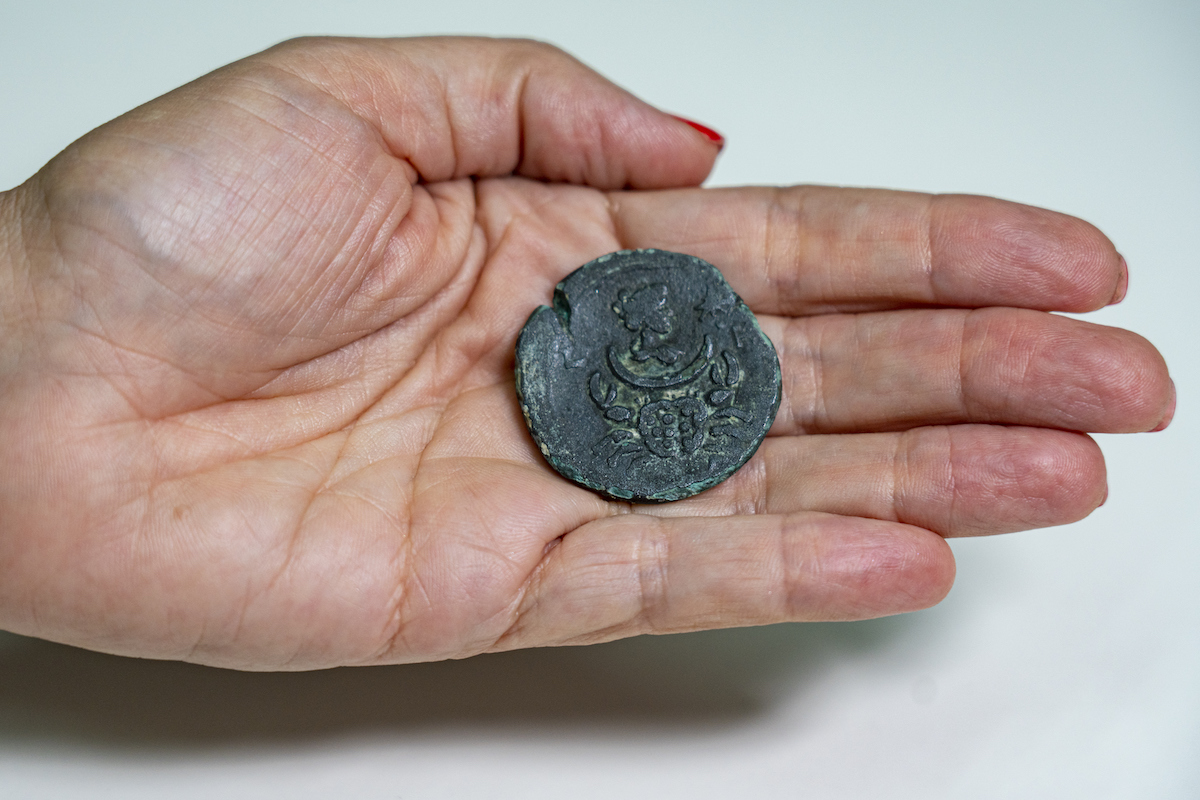 The coin bearing the image of Luna, the goddess of the moon. Below it appears a sign of cancer luck. (Photo: Yaniv Berman/Israel Antiquities Authority)

“Israel’s Mediterranean shores and waters have yielded many archaeological sites and finds that attest to connections in antiquity between Mediterranean ports and the countries along it,” he added.

The coin was discovered during a survey conducted by the authority, which is in the midst of efforts to document, research and preserve cultural and other assets that are at-risk from accelerated marine development.

This is the 13th coin of its type discovered. Twelve of them depict signs of the zodiac and another portrays the complete zodiac wheel, the authority said.

Luna is one of the Roman’s most ancient goddesses, dating back even before the foundation of Rome in 753 B.C. Her name is equivalent to the English word “lunar.” She was worshipped by the pagans at the new and full moons.

Much of the catalyst of the Bar Kokhba was the Jewish desire to drive the pagans out of Jerusalem.

In recent years, Israel has come to understand the importance of the sea for discovering the area’s cultural heritage, as much as serving strategic and economic aims, explained Israel Antiquities Authority’s Director Eli Eskosido.

“Israel’s territorial waters contain natural resources and cultural assets that must be explored and protected in light of different interests and potential development,” he said.