During a comprehensive conservation project in the iconic Tower of David in Jerusalem’s Old City, Israeli archaeologists discovered a rare Tyre coin believed to be used by Jewish pilgrims to pay the Temple tax during Passover in the Second Temple period.

These shekel coins from Tyre were minted from around 125 BC until the outbreak of the Great Jewish Revolt against the Romans in 66 CE.

Caroline Shapiro, director of International Public Relations & Strategic Communications for the Tower of David Museum, spoke to ALL ISRAEL NEWS about the remarkable discovery of the rare coin. Shapiro placed the Tyre coin in the wider context of understanding the ancient texts and the history of the land of Israel.

“Every time physical evidence is discovered from thousands of years ago, it sheds more light on the ancient texts. Amit Re'em, Jerusalem District archaeologist from the Israel Antiquities Authority describes it as if the text and physical evidence meet to shake hands,” Shapiro told All Israel News.

Given the large interest in the history of ancient Israel, Shapiro told ALL ISRAEL NEWS that the public would eventually be able to see the Tyre coin and other discovered artifacts in a future exhibition in Jerusalem.

“They will be displayed in the new permanent exhibition of the history of Jerusalem when it opens in spring 2022,” said Shapiro.

These coins originate from the ancient town of Tyre in present-day Lebanon. While historical accounts from the Second Temple era mention Tyrian shekels, very few coins have so far been unearthed. The coins are believed to have been used by Jewish pilgrims who paid Temple tax while visiting the Temple in Jerusalem during Passover. As is often the case with important archaeological discoveries, the ancient coin was found by chance inside a box with artifacts that were originally excavated in the 1980s. Prior to the discovery, the box had been buried and forgotten for around four decades.

Yotam Carmel, the conservation manager at Ken HaTor, the company in charge of the project, stressed the importance of the Tower of David in the history of Israel and Jerusalem.

“The Tower of David is one of the most important structures in Israel, both in terms of its history and location,” Carmel said. 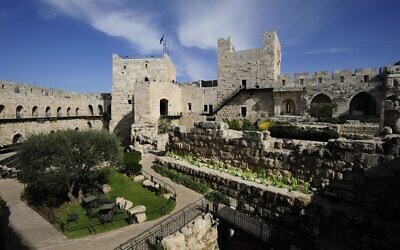 The Tower of David is located in an ancient citadel adjacent to the Jaffa Gate entrance to the Old City in Jerusalem. It includes King Herod’s ancient palace, the place where the trial of Jesus took place according to some historians and theologians. The name “Tower of David” derives from the fifth century AD and refers to the Phasael Tower, the tallest tower in the structure.

During the British Mandate in the 1920s and 1930s, the historical structure was also used for cultural events. The modern museum, which contains a permanent exhibition, is an ideal place to discover Jerusalem’s fascinating and diverse 3,000-year history. There are also temporary exhibitions housed in the ancient Crusader halls.

The Tower of David Museum was inaugurated in 1989 at the initiative of Jerusalem’s former celebrated mayor Teddy Kollek.