A Palestinian doctor was critically wounded and another man killed during clashes this morning between Israeli forces and Palestinian gunmen in the restive city of Jenin in the northern West Bank.

Israeli security forces were conducting counterterrorism activities in the area when fighting broke out early Friday.

“During the activity in Jenin, explosive devices and a massive number of shots were fired from armed suspects at the security forces,” the Israel Defense Forces said in a statement. “The forces responded with aimed live fire towards the armed suspects. Hits were identified.”

The IDF said it arrested several suspects including 24-year-old Diaa Muhammad Yusef Salama, who is responsible for several shooting attacks against soldiers and was carrying an M16 at the time of his arrest, the army said.

But during the arrests, shooting erupted in the residential area. Videos circulating on social media show what appears to be Palestinians with rifles shooting toward one direction on a narrow road while a woman ducks for cover and a Palestinian Red Crescent ambulance tries to reverse. In a different video, the ambulance is driving when it suddenly stops after a shot is fired. The driver and passenger jump out of the vehicle but quickly return to it as another round of shooting erupts.

Footage shows Palestinian gunmen firing at Israeli troops in the Jenin refugee camp while taking cover behind an ambulance. pic.twitter.com/xDjUrtI4xr

The doctor was identified as Abdullah Abu Tin in a tweet by Al-Aqsa TV, which also claimed he was killed. Some Palestinian reports say he is alive but in critical condition. ALL ISRAEL NEWS has not been able to verify the reports or videos.

This morning’s fighting follows a groundswell of tension that has been building over recent months in the West Bank and which, this week, spilled over into Arab neighborhoods of Jerusalem and into the Old City during the Jewish holiday of Sukkot which brings tens of thousands of visitors to the city.

Israel put Border Police reservists on alert for a possible call up.

On Wednesday night, Palestinians hurled rocks, fireworks and Molotov cocktails at Jewish homes and cars in clashes with Israeli security forces. In addition, a Jewish Israeli family escaped a lynch attempt while driving through one East Jerusalem neighborhood where riots had broken out.

Earlier in the day, 18-year-old Osama Adawi was killed after Israeli troops opened fire at a group of Palestinians who they said were throwing rocks at Israeli motorists. Adawi is one of more than 100 Palestinians killed in the West Bank this year, the worst violence in seven years.

Another flashpoint is the Palestinian refugee camp Shuafat which has been under police lockdown for five days following the shooting death of Israeli border police officer Noa Lazar. The shooter is believed to have escaped into Shuafat. 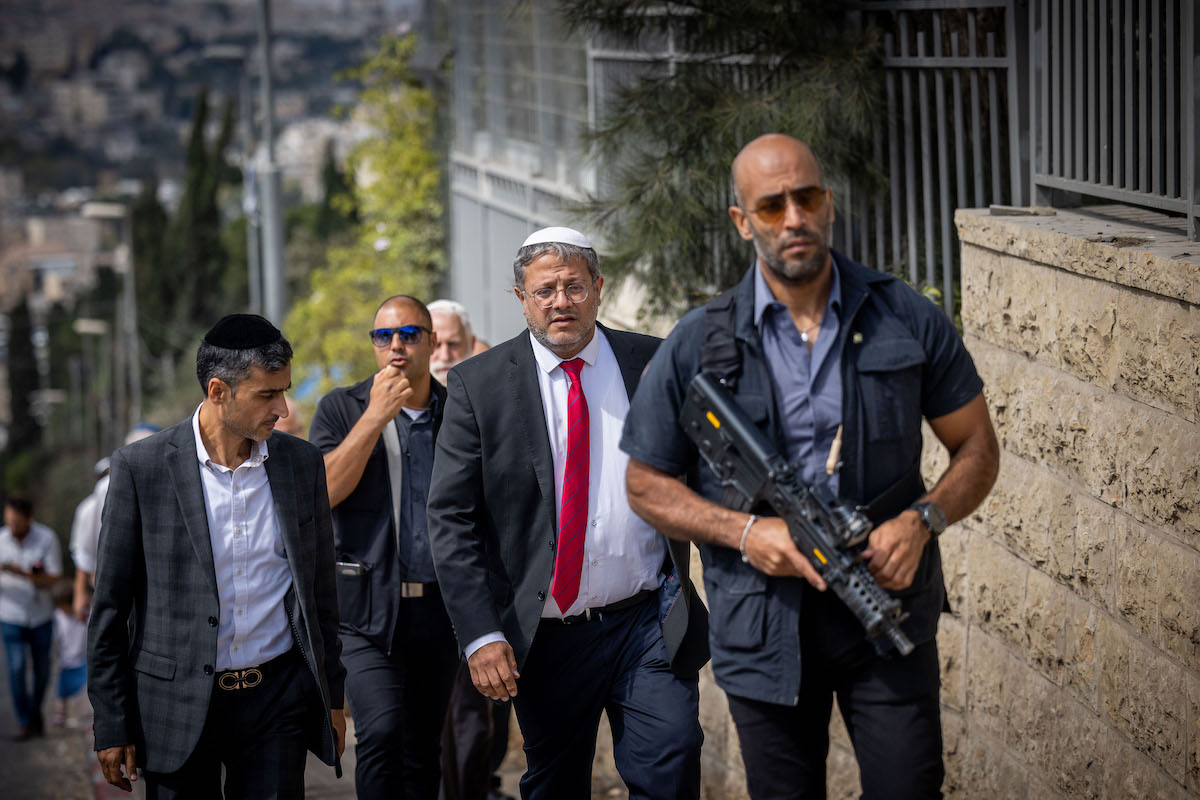 While brandishing his own weapon, Ben Gvir directed the police – “They’re throwing rocks – shoot at them,” as seen in videos posted on social media.

Ben Gvir was restrained by police but shouted at the Arabs there, threatening to “mow down” the group. Two Jewish teens were hurt and 11 people were arrested.

The recent Palestinian uprising – while not yet considered an intifada – appears to be spinning out of the Palestinian Authority's control. A worrisome new group calling itself Lion's Den has recently emerged in Nablus. Israeli Defense Minister Benny Gantz said the group is comprised of 30 thus far elusive members.

He said in an interview with Yediot Ahronot that Palestinian security services must "intensify their activity inside the territories they control, not to protect Israel, but to maintain the Authority's rule in its areas of responsibility.”

“The residents of East Jerusalem are an inseparable part of this city. Yes, it’s true that there is a minority that occasionally raises the temperature,” he said in an interview with Army Radio. “I am not here to convince people that there isn’t violence in specific sections, but to say that Jerusalem is burning? Absolutely not.”

Israeli forces have been operating in the West Bank – especially in Jenin – for several weeks to foil terror attacks against Israelis. In the last week alone, two Israeli soldiers have been killed – one in Jerusalem and one in a West Bank attack.