If you are in the lobby of the Magdala Hotel in Migdal, Israel, on the shores of the Sea of Galilee, you could be looking out a plate-glass window directly into the recently uncovered ruins of a first-century synagogue.

This synagogue is one of only seven that were known to exist during the time of the Second Temple in Jerusalem. Its remains were first discovered in 2009, when preparations were being made for the construction of the hotel.

Though Magdala was only a fishing village, it is mentioned in Jewish texts as a major location during the First Jewish-Roman War (66–73 A.D.), including when the Second Temple was destroyed in 70 A.D.

Magdala is also identified in the Gospels as the hometown of Mary Magdalene, a former demoniac who became a financial supporter of Jesus during his ministry, and the first witness of the risen Messiah.

The main hall of the Magdala Synagogue was 120 square meters in size, and contained stone benches built against elaborately decorated walls.

The walls were found detailed with colorful frescos, the floor decorated with mosaic stones. The large Magdala stone – a carved representation of the Second Temple – depicted columns, amphoras (vases) and a menorah on a pedestal.

A replica of the Magdala stone is on display at the site, while the original has been removed for safekeeping. The stone is believed to have stood in the center of the synagogue, possibly used as a reading stand.

On one side of the stone – the side which faces Jerusalem – is a relief of a seven-branched menorah which is believed to be a replica of the menorah that stood in the Temple in Jerusalem. 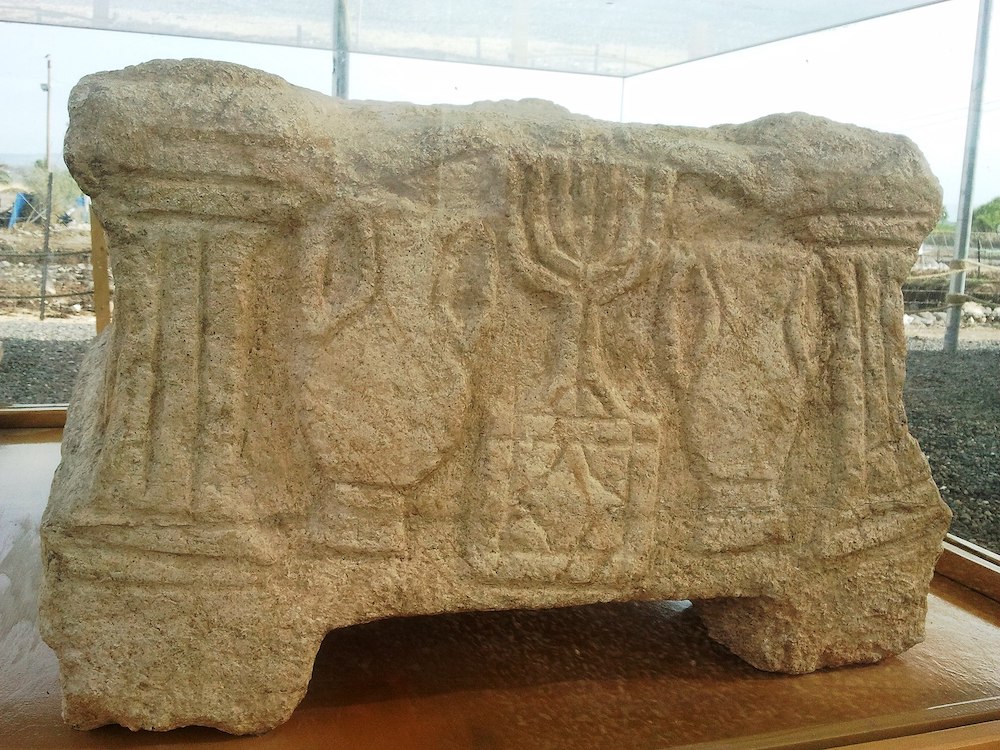 This is believed to be the earliest image of a menorah and is the first to be discovered in a Jewish context that dates to the Second Temple period or the beginning of the Early Roman Empire.

Since it was likely engraved when the Second Temple was still standing, it is assumed that the sculptor saw the original Temple menorah with his own eyes.

The stone also depicts pillars and arches that some archaeologists believe illustrate the entrance to the Holy of Holies in the Temple.

According to Hebrew University professor Rina Talgam, who specializes in Near Eastern art, the stone is said to have given the synagogue a special aura of holiness, making it like a second or lesser Temple.

As most travel was on foot, it would not have been easy to travel from the Galilee to Jerusalem to worship.

The remains of the ancient Magdala Synagogue sit on land belonging to the Ark New Gate company, which has built a guest hotel and cultural center at the site.

The company has shown delight over the find, which lends itself to the goal of making their hotel a center for interfaith conferences, dialogue and mutual understanding between the faiths.

In the shadow of the modern city of Migdal, first-century city Magdala was the main base of Romano-Jewish historian Yosef Ben Matityahu (Josephus Flavius), a commander of the Jewish rebellion in the Galilee. The Jewish rebels here continued to resist the Romans after most of the Galilee, including Tiberias, had fallen.

At the end of the Second Temple period, Migdal was an administrative center on the western shores of the Sea of Galilee, and the only settlement of importance in that area until the founding of Tiberias in 19 A.D.

An area located south of the synagogue contains the remains of four well-preserved mikvot, or ritual baths, which were used in the first century. These were fed by subterraneous, flowing water, and they continue to function today. Adjacent to two of the baths is a room that reveals a mosaic floor with a pattern similar to that of the synagogue.

The synagogue and ritual baths together indicate an extensive Jewish presence in northern Israel during the period that the Temple was standing in Jerusalem.

Alongside the synagogue’s archaeological remains, the Magdala Guest House contains Duc in Altum [“Launch Out into the Deep”] Church, to offer Christians a place of prayer and worship. The church’s altar, in the form of a boat, with the help of floor-to-ceiling windows, appears to be floating on the Sea of Galilee.

The Duc in Altum Church has become an attraction for Christians and non-Christians alike.

It is an important site for fine art, music and culture; and has served as a setting for the Sea of Galilee International Choir Festival, the famous Israeli Udiana Choir and the Magdalena Institute’s Women´s Encounter.

The archaeological park is open daily from 8 a.m. to 6 p.m. Check the website for entry fees.