Prime Minister Naftali Bennett on Aug. 12 asked Pfizer CEO Albert Bourla to expedite Emergency Use Approval from the U.S. Food and Drug Administration of the vaccine for children under age 12.

Bourla told Bennett he is "doing his best to expedite the process."

This report has three underlying assumptions, all of which are troubling.

However, Bourla’s open response – that he will “work to the best of his ability” to speed up the process – seems to indicate that there is no shame in letting the public know that Pfizer has some level of influence over the FDA.

Second, this report assumes that a high-paying customer, in this case the Israeli government, can unabashedly request from a pharmaceutical company, in this case Pfizer, to intervene on its behalf with the FDA. Although it’s not comforting that big pharma may wield power within the FDA, the reality of the situation is not surprising. However, it is more surprising that the customer – the Israeli government represented by Bennett – has no shame in going on the record, publicly making this request that a drug manufacturer intervene with the FDA on its behalf. The Prime Minister’s Office even put out a statement regarding this conversation.

Third, this report is troubling since it involves experimental medical treatments on children under 12 years old. What is the rush to “speed up” the FDA approval process? Shouldn’t we take the most precautions and do the most thorough testing when it comes to our children? Why cut corners simply to speed up? By all statistics reported, children between 3 to 12 are at the lowest risk if they contract COVID-19.

In fact, no children or teenagers, ages 0 to 19, in Israel have died from COVID-19 as reported by the Israeli Health Ministry. 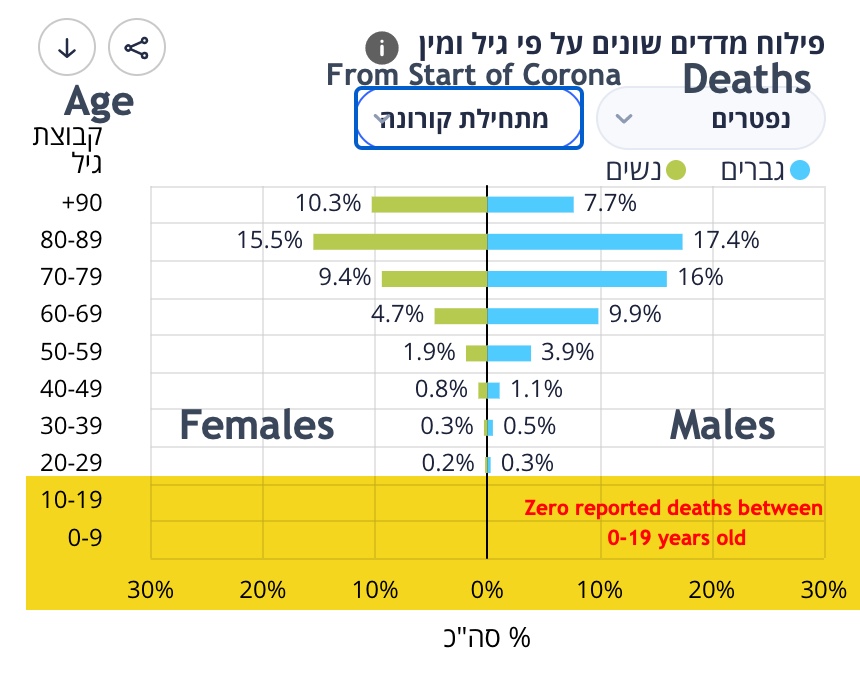 Data from the Israeli Ministry of Health website showing the percentage of deaths from COVID-19 by age and gender from the beginning of the pandemic. (Source: https://datadashboard.health.gov.il/COVID-19/general?tileName=infectedByAgeAndGender)

This encouraging statistic of zero child deaths from COVID may come as a big surprise to many people in light of Health Minister Nitzan Horowitz's recent comment on Aug. 13 that children need to get COVID vaccines in schools since "We’re in an emergency."

Should the vaccine be approved for children 11 and under, the green passport rules could be extended to those ages as well which would put further pressure on parents to have their children vaccinated. It’s difficult to understand the rush to speed up a regular FDA process just to vaccinate children who are at basically zero risk of suffering from the virus while the long-term effects of the vaccination on children remain unknown.