After most of the country enjoyed unseasonable weather for the past week with temperatures that had hovered in the 60s and even 70s, Israelis were bracing for a nosedive in temperatures that could plunge into the 30s beginning Tuesday night.

Winter storms are expected to sweep through beginning tonight which could dump rain — as well as snow — throughout the country. Jerusalem alone is expected to receive some 4 inches of snow while the Golan Heights was expecting up to 1 foot.

Meteorologists are predicting precipitation and freezing temperatures to last through Friday.

These conditions could mean that children in Jerusalem, who just returned to school on Tuesday after the COVID lockdown, will be back at home again most likely the rest of the week since the city usually shuts down when it snows. in fact, Mevasseret Tzion, a Jerusalem suburb already called for online learning for Wednesday - while the sun was still shining and temperatures remained in the upper 60s. 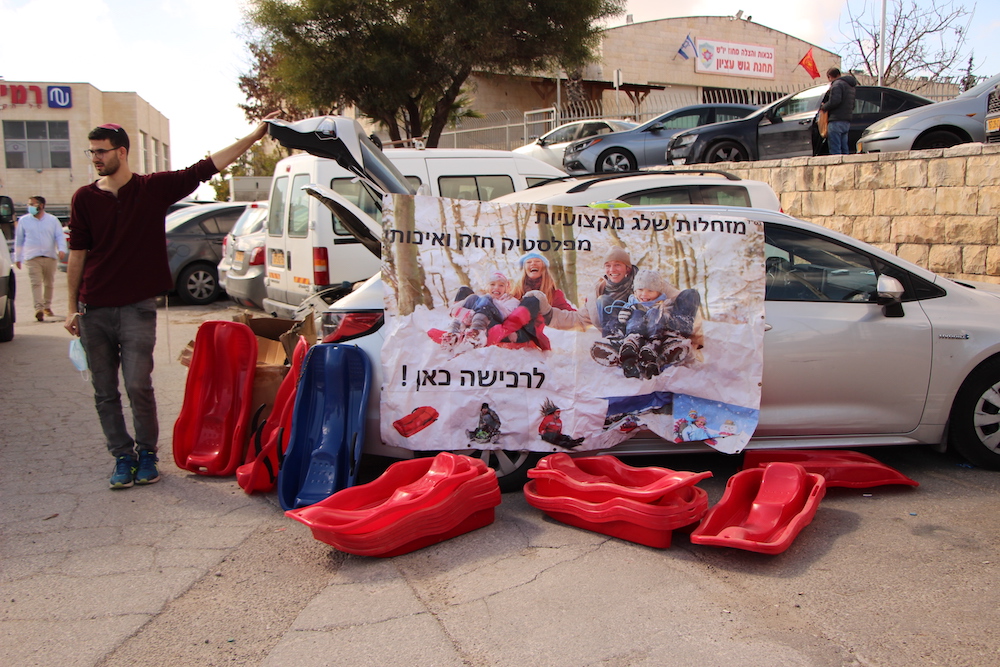 A man sells sleds in Gush Etzion, outside of Jerusalem, on Feb. 16, 2021, as a wintry blast is expected to bring a snowstorm to Israel. (Photo: Gershon Elinson/Flash90)

The electric company warned of possible black outs. Residents have been instructed to keep hot water dripping to prevent pipes from freezing and to secure loose objects on their balconies in anticipation of high winds.

The Jerusalem Municipality said it will be ready with snow plows and emergency services.

Snow is rare in Jerusalem and even if it does come, it rarely sticks. This time could provide ground coverage for a few days if the storm system behaves as most people is expecting. The last significant snowfall in the city was in February 2015 and prior to that in December 2013 — which not only stuck but froze over for several days leaving the city paralyzed.

“After weeks of lockdown, it will be fun for parents and children to get out and have fun in the snow,” Jerusalem Deputy Mayor Fleur Hassan-Nahoum who has four children. “The city is making all the necessary preparations for this to be a positive experience for all. This is a great way to ease us all out of the lockdown and back into normalcy.”