Israelis spent the weekend burying the 45 victims of the Mt. Meron tragedy – the youngest of whom was 9 years old and at least a dozen more under age 18 – while flags flew at half-mast as the nation entered into a day of mourning for the worst peacetime disaster in Israel’s history.

The deadly crush unfolded in the early hours of Friday at a Lag B’Omer event attended by an astonishing 100,000 worshippers – the largest event in Israel since the onset of the COVID-19 pandemic. According to initial reports, worshippers – who were packed in shoulder to shoulder – fell on a narrow walkway and then piled up on top of each other.

Among the dead were four Americans, a Canadian and an Argentinian.

“This is one of the most difficult disasters I have dealt with during my volunteering for the ZAKA organization,” said ZAKA volunteer Haim Spielberg. “When I arrived, I saw dozens of people lying on the floor, having been pushed into a narrow passage. Everywhere, there were cries for help.”

“While we were working at the scene, it was so distressing to hear the constant ringing of the cellphones of the deceased. Tears flowed from my eyes when I saw the words ‘dad’ or ‘mom’ on the phone screen,” he continued. “The rescue and security forces kept removing more and more bodies from the scene.” 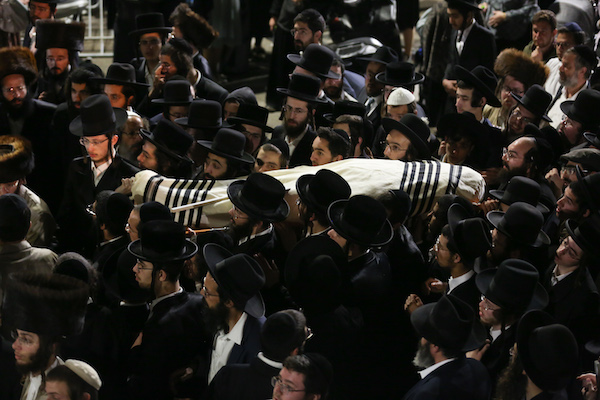 Ultra-orthodox Jews attend the funeral of the brothers Yosef David Elhadar and Moshe Mordechai Elhadar, two of the victims of the Mt. Meron tragedy, May 2, 2021. (Photo: David Cohen/Flash90)

Residents of nearby Arab towns rallied to help survivors, opening their homes and offering food and drinks for the thousands of Jewish worshippers trying to make their way home.

“Beit Jan residents and the local council join in the grief of the entire nation,” said Radi Najm, mayor of the Druze town of Beit Jan. “They open their homes and the council’s facilities to offer any help possible. I have ordered the [town’s] emergency services to provide any help necessary to the rescue crews. The residents are ready to receive evacuees and families from the disaster area.”

Arab Knesset members dropped their political differences to offer condolences. Joint List leader Ayman Odeh spoke of the dozens of families “left torn and bereaved” and praised Jews and Arabs working together in response to the disaster.

Ra’am leader Mansour Abbas sent condolences to the bereaved amid his “difficult feelings over the terrible disaster.”

Some 2,000 Israelis donated blood for the victims – 16 of whom remain in critical condition.

Biblically, the counting of the omer marks the days between Passover and the next feast – Shavuot. For Lag B’Omer, Israelis celebrate by building bonfires and ultra-Orthodox Jews gather on Mt. Meron – believed to be the date of death of Rabbi Shimon bar Yochai – and near the grave of Rabbi Akiva.

It is supposed to be a festive gathering where revelers dance and sing through the night. 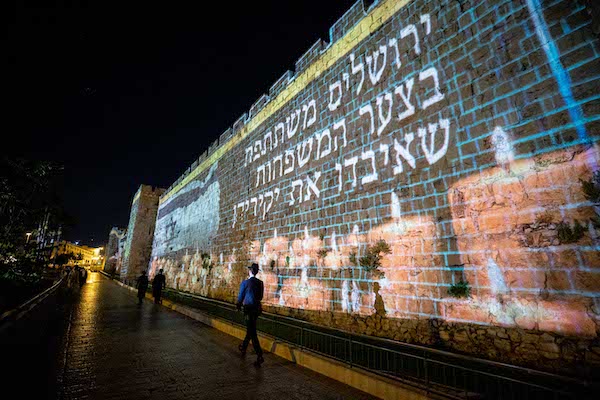 The Old City walls in Jerusalem are lit up with the Israeli flag and candles, with the words "Jerusalem shares in the sorrow of the families who lost their loved ones," in memory of the 45 victims who were killed the Mt. Meron tragedy, May 1, 2021. (Photo: Yonatan Sindel/Flash90)
Share: