Per Islamic law, non-Muslims are prohibited from visiting Mecca and are restricted from entering parts of central Medina, where the Prophet Mohammed’s Mosque is located.

The correspondent is shown driving past iconic sacred sites in Mecca, just one week after the annual Muslim pilgrimage to the Kaaba, known as the hajj.

“The city of Mecca is the holiest to believer[s] of Islam and is closed to anyone who is not Muslim. You just can’t enter it,” Tamari says to the camera as he walks down a street in Jeddah, documenting himself.

“It was clear to me that my chances of visiting Mecca are low, but I was able to find the one person who was willing to take the risk and take me on such a journey,” Tamari says of his local driver, whose face is blurred on the footage.

The driver reassures the Israeli reporter that if they enter the city pretending to be friends, “it will all be fine.” Tamari’s driver directed him to not say if he is Muslim or not, and if asked by anyone, “just say I come for hajj.”

On the way to Mecca, the Channel 13 correspondent noticed signs in both English and Arabic that said the next exit right is “For Non-Muslims.” His driver continued past it and kept going to the holy city. 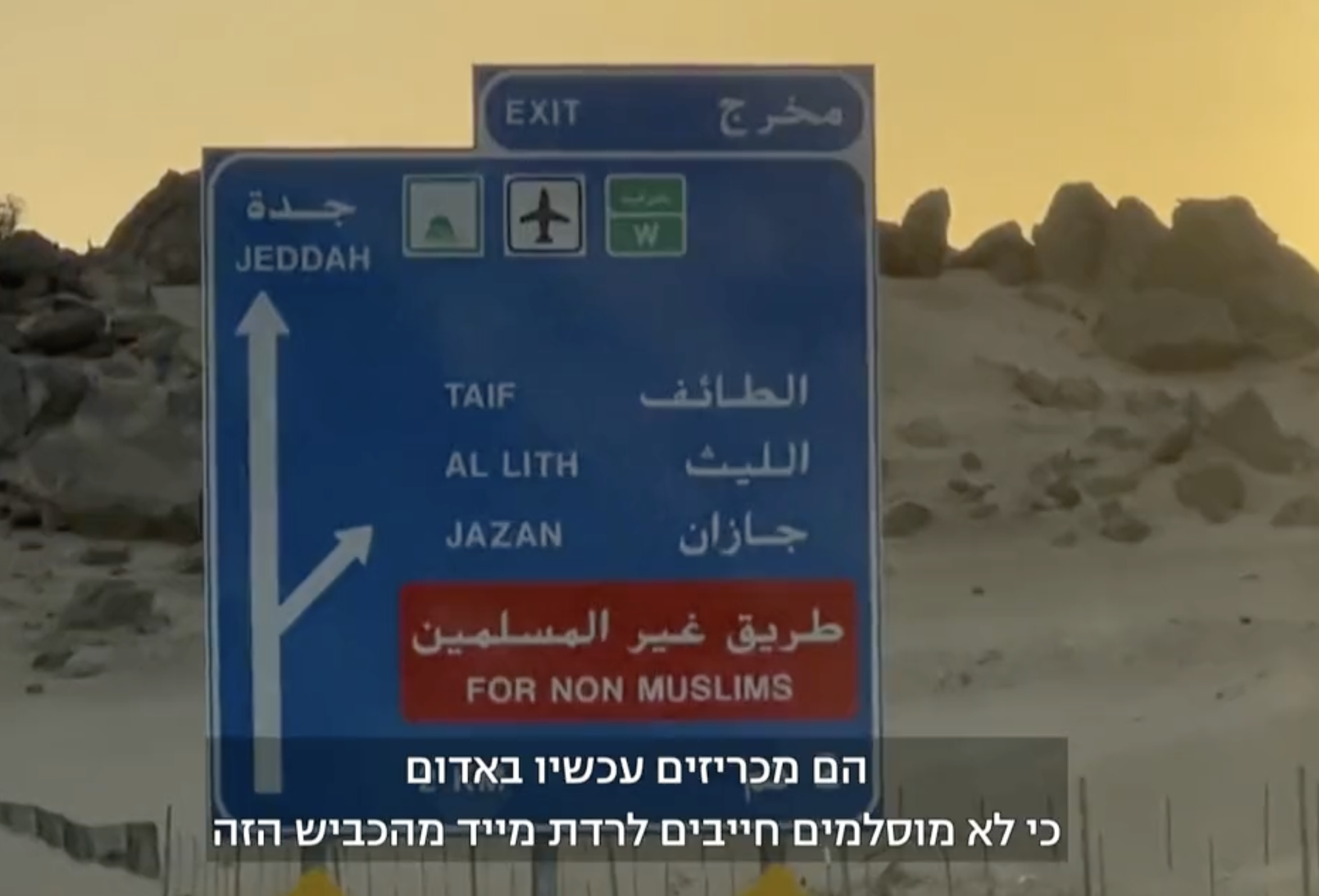 The TV report stirred outrage not only in Saudi Arabia, but also in Israel. Many Israelis criticized it on social media as “provocation,” giving a “bad name to the people of Israel” and causing “unnecessary harm” to Israeli-Saudi relations.

Saudi blogger Mohammed Saud, who has been a vocal proponent of normalization with Israel and has visited the Jewish State multiple times, posted a video in Hebrew condemning the channel’s actions.

“My dear friends in Israel, one of your reporters entered the holy Muslim city of Mecca and filmed without any shame. That’s like me entering a synagogue and reading the Torah. Shame on you, Channel 13; you should be ashamed of disrespecting Islam like that,” Saud said.

In response, Channel 13 hailed Tamari’s report as “an important journalistic accomplishment” and offered an apology “if anyone was offended.”

Tamari posted a disclaimer on social media, saying, “I would like to reiterate that this visit to Mecca was not intended to offend Muslims, or any other person. If anyone takes offense to this video, I deeply apologize. The purpose of this entire endeavor was to showcase the importance of Mecca and the beauty of the religion and, in doing so, foster more religious tolerance and inclusion.”

“Inquisitiveness is at the heart and center of journalism, and this type of firsthand journalistic encounter is what separates good journalism from great journalism,” Tamari wrote. “This founding principle also guided us in this journalistic endeavor and allowed many people to see, for the first time, a place that is so important to our Muslim brothers and sisters, and to human history.”

Despite his apology, the reporter became a target for online mockery as social media users suggested locations and storylines for his next story.

“Gil Tamari, if you are looking for a challenge, go to North Korea,” one wrote.

Prominent figures pointed out the media’s double standard in depicting Israeli right-wing lawmakers who often visit the Temple Mount in Jerusalem as provocateurs, while celebrating Tamari’s reporting from a place forbidden to the non-Muslim populace.

The Islamic world has criticized the report, with a hashtag in Arabic “Jew in the Haram” – “the holy place.”

One Saudi profile wrote in Arabic, “Bye-bye, normalization … It got canceled before it even started.”

Last week, Saudi Arabia and Israel reached a historic milestone through American mediation, when the kingdom announced it will allow Israeli airlines to fly over its territory.

Biden said the flyover permit was “a big deal, not only symbolically, but substantively.” He defined it as a “first tangible step on the path of what I hope will eventually be a broader normalization of relations.”

Saudi Foreign Minister Prince Faisal bin Farhan Al Saud denied, however, that his nation’s decision to open up its airspace to civilian overflights has anything to do with the establishing diplomatic ties with Israel nor represents “a precursor to any further steps” toward normalization.