Israel wants to turn the Dead Sea area into a global tourism hotspot that will take inspiration from – and seek to rival – extravagant destinations like the Maldives and Dubai.

The Ministry of Tourism hopes this will draw an additional 10 million visitors per year to the Holy Land over the next eight years. By 2026, Israel wants to double accommodation options at the Dead Sea by building hotels with an additional 4,000 to 5,000 rooms along the extensive Dead Sea promenade.

The Dead Sea itself presents a major challenge to these plans, however. The mineral-rich water source is rapidly shrinking and portions of the coastline are in danger of collapsing into sinkholes. However, the Tourism Ministry would rebuild the deteriorating coastline with a number of manmade islands, peninsulas and inlets.

The ministry also wants to raise the bar by building 35 cottages on stilts in the sea, mimicking a popular option in the Maldives. The draft plan also calls for a 198-room hotel to be built on the water.

One island that has already been built for the project will be home “to a massive dome that will be used as a 5,000-person capacity center with world-class amenities and 360-degree projection lighting,” the Times of Israel reported.

The dome is being built abroad and will be transferred to Israel nearly complete. It is expected to be ready to open within the next six months.

Several developers, including Bercleys Papo, and the hotel chains Fattal, Elad, Isrotel, Astral and Vert will be involved in developing and managing the area. 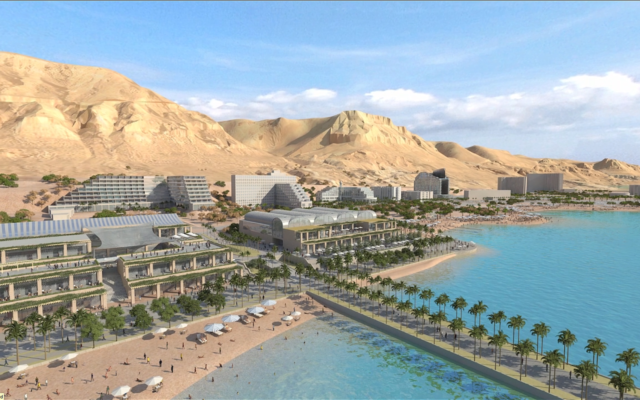 While considerable attention has focused recreating the magic of the Maldives, the use of islands, jetties and inlets takes a page from the playbook of a different tourism hotspot: Dubai.

The Emirati city has made extensive use of all three to extend its otherwise limited coastline; hundreds of small islands and peninsulas create a world map, a palm tree and other formations, offering beachfront property for resorts and luxury accommodations.

“Our vision is to create a unique experience at the Dead Sea in tune with the unique significance of the lowest point on earth,” said Tourism Ministry Deputy General Director Kobby Barda.

The new Dead Sea projects include a luxury shopping and lifestyle center; a multipurpose art-and-culture center; a world-class spa; and a desert-toned visitors’ center, which will serve as a travelers’ hub for walking, cycling and general exploration.

Israel’s Ministry of Tourism describes all these projects in a brochure detailing investment opportunities at “The Dead Sea Valley Tourism Complex.”

The excitement around growing tourism at the lowest point on Earth belies the fact that the Dead Sea is dying – an environmental disaster that has been unfolding for several decades and has already de facto split the sea in half.

In a 2005 article for Smithsonian Magazine, Israeli environmental activist Gidon Bromberg described waging an impossible battle to save the shrinking sea by trying to lobby “Jordan, Israel and the Palestinian Authority to nominate the Dead Sea as a United Nations World Heritage site – a designation that would mandate creation of an environmental protection plan and restrict development.”

While the ambitious Dead Sea project might significantly increase tourism in Israel, the Dead Sea’s future viability remains in doubt.