At a special meeting at Kibbutz Mevo Hama on the Golan Heights, Israel’s government voted on Sunday to earmark around $320 million for developing and doubling the Jewish population in the strategically important plateau overlooking neighboring Syria.

The plan involves building two new Jewish towns and expanding Katzrin, the largest Jewish town in the area. Currently, some 25,000 Israeli Jews and 23,000 Druze live on the Golan Heights. Due to its location and elevated terrain, the Golan Heights are considered crucial for the national security of the State of Israel.

While most Israeli leaders support Israel’s territorial claims to the Golan, the left-wing Meretz party and the Islamist Ra’am party expressed reservations about the Golan plan.

“We are making history in the Golan,” Israeli Prime Minister Naftali Bennett tweeted ahead of the government vote.

Bennett stressed that the strategic heights belong to Israel.

“We are making history in the Golan. First, it must be said, the Golan Heights are Israeli; this is self-evident,” stated Bennett.

Israel captured the Golan Heights during the 1967 war after being attacked by Syria. Prior to the war, the Syrian military had frequently used the Golan Heights to shell civilian Israeli border communities, forcing an entire generation of Israelis to grow up in bomb shelters.

Modern Jewish communities were established in the Golan Heights in the late 19th century, partly with the financial assistance from the French Jewish philanthropist Baron Rothschild. When the British and the French colonial powers divided the Middle East in the 1920s, the Golan Heights were originally part of the British Palestine Mandate. However, Britain eventually ceded the territory to the French-controlled Syrian mandate in 1923.

In 1981, Israel decided to annex the Golan Heights, but the political move was rejected by virtually the entire world. In 2019, the Trump administration recognized the Golan Heights as Israeli territory, thereby reversing decades-held U.S. Middle East policy. 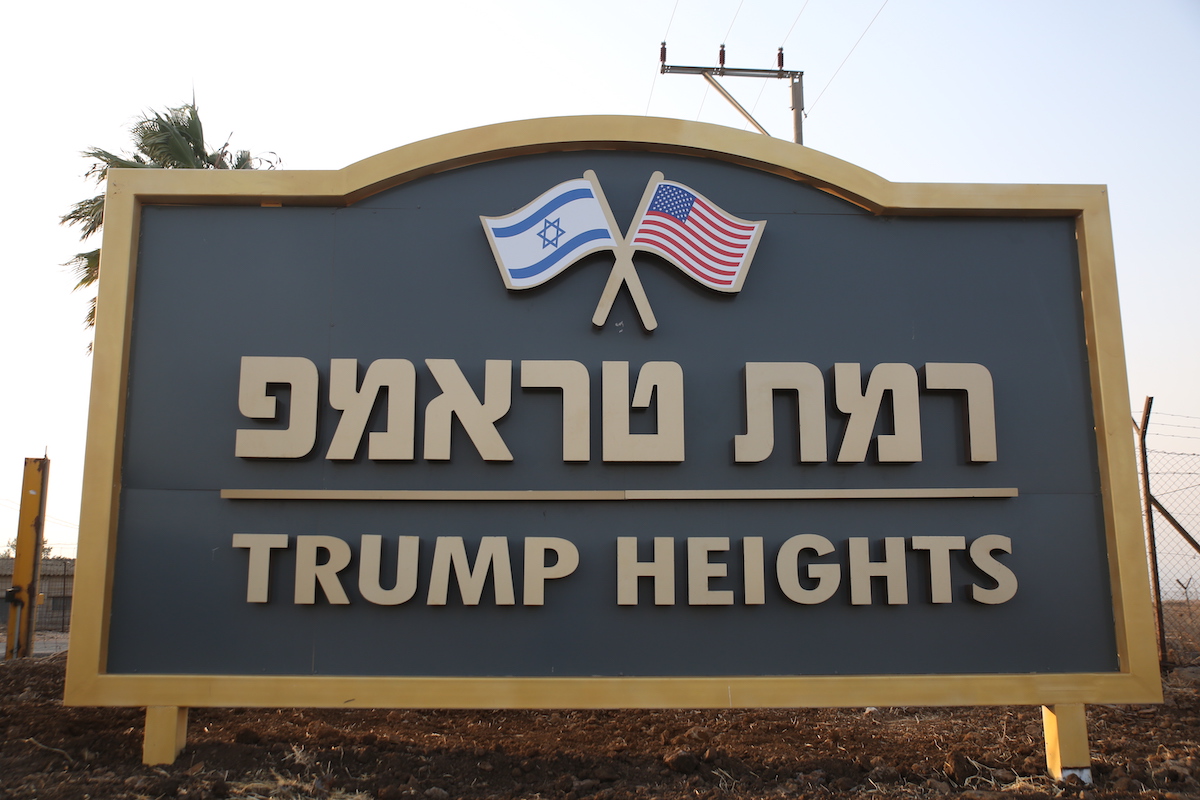 A sign reading "Trump Heights" at the community to be named after U.S. President Donald Trump, in Kela Alon in the northwestern Golan, Nov. 7, 2019. (Photo: David Cohen/Flash90)

In October, Bennett announced that Israel’s long-term goal was to quadruple the Jewish population in the Golan Heights from around 25,000 to 100,000.

During the special government meeting at the Golan Heights, Bennett recalled the Jewish state’s decision to annex the territory four decades ago.

“Exactly 40 years ago, the government of Israel led by Menachem Begin made an incredibly brave and important decision: to apply Israeli law to the Golan Heights,” stated Bennett.

The Israeli prime minister also stressed the importance of Washington’s recognition of the Golan Heights as Israeli territory.

“Almost three years ago, we were informed of another significant development: the decision of the previous American administration to recognize the Golan Heights as part of Israel – a perception that has been adopted by the current administration,” declared Bennett.

In February 2021, U.S. Secretary of State Antony Blinken spoke with former Israeli Foreign Minister Gabi Ashkenazi on the issue of the Golan Heights.

“As long as [Syrian President Bashar] Assad is in power in Syria, as long as Iran is present in Syria, militia groups backed by Iran, the Assad regime itself – all of these pose a significant security threat to Israel, and as a practical matter, the control of the Golan in that situation I think remains of real importance to Israel’s security,” Blinken stated.

In other words, the Biden administration recognizes the Golan’s importance to Israeli security while simultaneously leaving the diplomatic door open for Syrian-Israeli negotiations in a potential but unlikely post-Assad era.

However, it is highly unlikely that any Israeli government would ever accept surrendering the Golan Heights under any circumstances.