JERUSALEM—Moshe Timor sprawled out at Rehov Herut 14 (14 Freedom Road) where he was planning to camp out, build a new city – and flatten the curve, he quipped – until all COVID restrictions were dropped.

“Everything that was pre-corona – shut it, bring it back to normal,” he told ALL ISRAEL NEWS. “No masks for kids, no restrictions, no anything. And all these dangerous laws they passed, without much notice, they must remove them also.”

Timor was one of hundreds of Israelis who camped outside the Knesset for five days, having arrived on Feb. 14 as part of Israel’s own Freedom Convoy. They renamed the street Freedom Road and set up a tent city planning to stay until Israel repealed the Special Powers law.

The protestors took inspiration from Canada where truckers, opposed to vaccine mandates to keep their jobs, converged on parliament in Ottawa.

In Canada, Prime Minister Justin Trudeau invoked the Emergencies Act giving him the power to freeze assets of the protestors and send police in by force to break up the demonstration. Israel has a similar law – just recently extended until the end of this year – and the United States just extended its own as well.

And it is exactly this law that troubles Timor and others who were planning to stay in the more than 100 tents set up outside the Israeli Knesset.

Attorney Rotem Brown spoke to ALL ISRAEL NEWS last week about the Special Powers law, which does not specify what constitutes a state of emergency beyond simply a “suspicion” of spread of the coronavirus.

Brown is also concerned with the government’s quest to give everyone a digital code through the Green Passport, as well as the government’s concealed agreement with Pfizer to test how – or if – Israel can reach herd immunity with its vaccine.

Another aspect of the law states that police would not need a warrant to enter someone’s home, Brown said.

Brown further noted that the law also removes due process, putting the power into the coalition and not the wider parliament. [LISTEN THE FULL INTERVIEW ON THIS PODCAST]

The juxtaposition of the five-day protest with the sudden reversal of almost all of Israel’s COVID restrictions in the past few weeks is odd. The protest seemed like too little too late as the country reopens even to unvaccinated tourists from March 1. And, unlike Canada and European countries, Israel never had a black-and-white vaccine mandate. While inconvenient, Israelis always had the option to test rather than show proof of vaccination.

Nevertheless, the protest had been largely peaceful and, in fact, on Friday was marked by a festival-like atmosphere. A band staged a concert, lawyers led a discussion, children bounced off a 10-foot-high coronavirus inflatable and many took part in Shabbat services as the sun set on Friday. The protest drew Israelis from all sectors of the population, including both secular and religious Jews and Arabs. Also present were some Israeli doctors who have been offering opinions differing from the Ministry of Health during the pandemic. 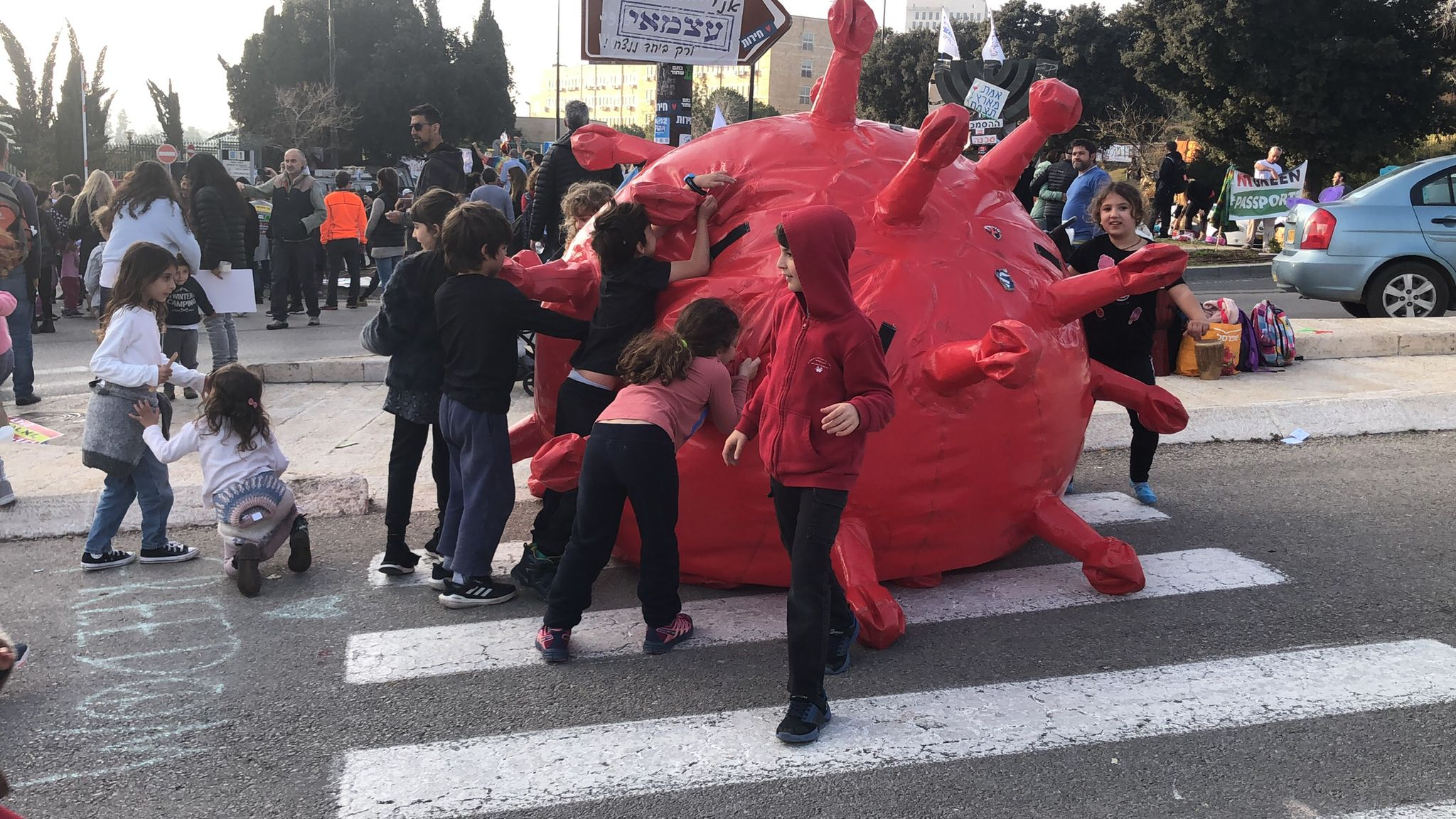 But Israeli police abruptly cleared out the Freedom Convoy on Saturday night after five days. According to protestors at the scene, police came in without warning and started removing tents, food and signs that were stretched over a quarter mile of road outside the main street in front of the Knesset.

By Sunday, little evidence of a protest remained outside parliament.

And despite this being the largest protest Israelis have mounted against COVID policies in the last two years, the convoy rated zero local mainstream media attention. And very few Israelis knew of the protest or of the Special Powers law.

But those who oppose it are regrouping and planning to keep up the pressure in any way they can.