Despite the chilling fact that Iran is just two months away from having enough highly enriched uranium to start building nuclear weapons, the founder of ALL ISRAEL NEWS and ALL ARAB NEWS says U.S. President Joe Biden does not seem to see or truly understand the urgency of the threat.

“President Biden's surrender to the Taliban is… the greatest TV propaganda ad for radical Islam that there ever was after 9/11,” said Joel C. Rosenberg on Newsmax TV on Tuesday night. “And Iran is close to getting 'The Bomb.'”

Rosenberg was on the program to discuss his new book, “Enemies and Allies: An Unforgettable Journey Inside the Fast-Moving & Immensely Turbulent Modern Middle East.”

“President Biden fundamentally [doesn’t] understand the threat of radical Islamism,” Rosenberg told anchors Sean Spicer and Lyndsay Keith. “If President Biden can't handle the Taliban, how are we going to trust him to contain and neutralize the nuclear threat from Iran?” 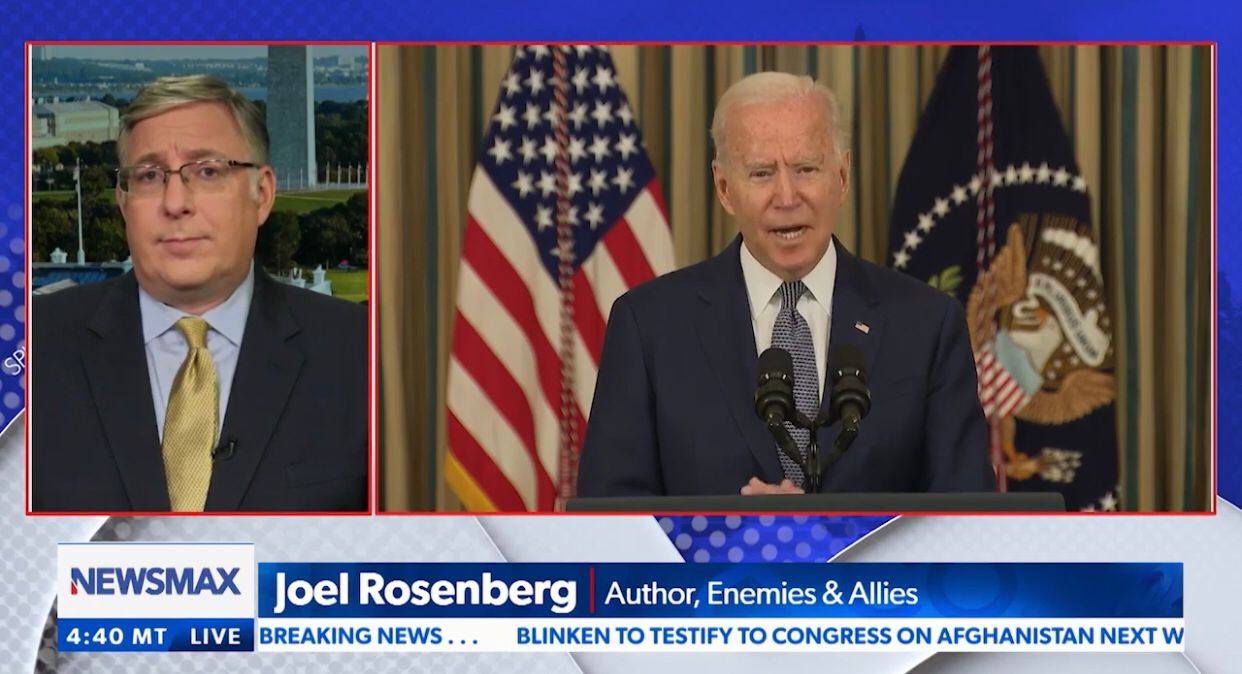 Rosenberg said Israeli and Sunni leaders across the region understand how dangerous the Iranian Supreme Leader is, but there’s no indication that Biden does.

The Ayatollah Ali Khamenei “wants a nuclear 9/11,” Rosenberg said. “He doesn't simply want to take out skyscrapers in the United States. He wants to take out cities, and we need strength to face him down.”

“Israel and the Arab world have become deeply nervous. They see weakness in Washington. It's rattling our allies. It's emboldening our enemies. And I'm telling you right now, Israeli leaders are talking to me and other reporters behind the scenes, off the record, saying they’re getting ready to have to strike Iran. We hope it doesn't happen. But this is the worry: If the United States is going to abandon the Middle East, then Israel and the Arab allies, we’re on our own."

Rosenberg indicated he believes Israel and the Sunni Arab states need to form an alliance to counter Iran, and noted that he is watching to see if Saudi Arabia normalizes relations with Israel in the coming year to help build such an alliance.

Here is the full transcript:

SPICER: Now that the U.S. has officially left Afghanistan, one big question remains:  what's next? Our next guest tries to answer that question in his latest book, "Enemies and Allies." It takes readers behind closed doors in the Middle East through exclusive interviews with some of the most complex and controversial and interesting leaders in the world. Joining us now is New York Times bestselling author, Joel Rosenberg. Joel is also the editor and chief of ALL ISRAEL NEWS. Joel, I got my copy. It's amazing. I know Lindsay's got hers. I saw just a second ago that Mike Pence tweeted out in support of it. I mean, talk about a way to kick off a book tour. Pretty good, huh?

KEITH: Yeah, huge congratulations on the book, Joel. So glad to have you with us here, especially during this time, because in your book you reveal these conversations that you personally had with leaders of Israel, Arab presidents, prime ministers, kings, crowns, princes. The list goes on. But based on your conversations and the current events, what is the future of the Middle East, especially as it pertains to the relationship with the U.S.?

ROSENBERG: Well, Lindsay, as I describe in the book, there are really two competing narratives – two competing trend lines – that couldn't be more different.

On the one side, the radical Islamists feel like the wind is at their back, that Allah is on their side, that they're gaining ascendancy, and they're becoming more aggressive. And with President Biden's surrender to the Taliban, this is just exploding – the greatest TV propaganda ad for radical Islam that there ever was after 9/11. That's one trend line. Very dangerous. And Iran is close to getting The Bomb.

On the other side, Arab countries are deciding, “Israel is not the enemy. Israel is the ally. We should join forces with Israel.” And that's why when everyone said President Trump would never be able to make peace in the Middle East, he actually should get a Nobel Peace Prize because he persuaded Israel and four Arab countries to make peace.

So, these are the two competing trends. And the United States has to be strong with our allies and put the fear of God in our enemies. 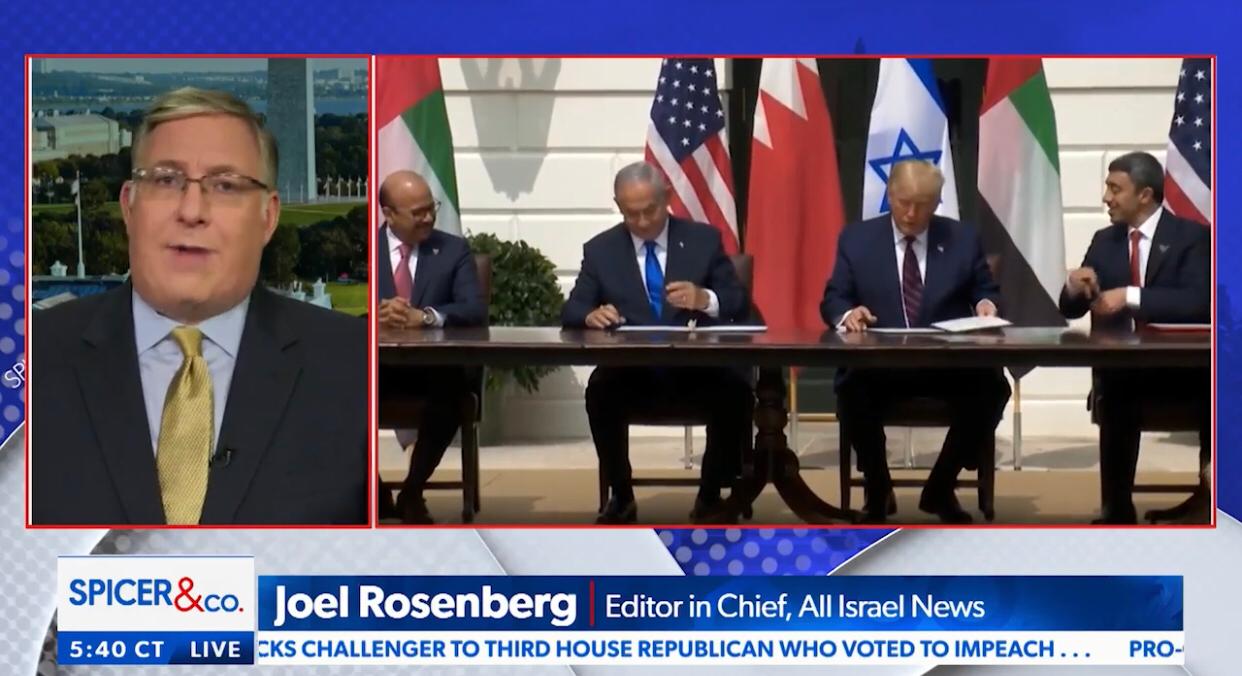 SPICER: You know, Joel, you just mentioned that all these people were wrong about President Trump. He moved the embassy to Jerusalem. Yet [they said] he couldn't make peace. He did, and the world was a better place. So, what do you think most U.S. politicians get wrong about the Middle East?

ROSENBERG: Well, let me just say, Sean, as you know, I was very skeptical of – and critical even of – Donald Trump in 2016. I would have considered myself a “Never Trumper.”

But when I sat down in the Oval Office after several years, I said, “Listen, Mr. President, you have blown me away with your ability to rip up that Iran nuclear deal and put a ‘maximum pressure’ campaign on Iran, move the embassy to Jerusalem, stand strong with Israel and our Arab allies. This is great stuff.” Plus, the Abraham Accords were coming.

But most leaders, and particularly President Biden, fundamentally don't understand the threat of radical Islamism. You would think 20 years later they do. But look, if President Biden can't handle the Taliban, how are we going to trust him to contain and neutralize the nuclear threat from Iran?

That’s my big concern, Sean – the Iranian Supreme Leader. He wants a nuclear 9/11. He doesn't simply want to take out skyscrapers in the United States. He wants to take out cities, and we need strength to face him down.

KEITH: You know, that's why Prime Minister Naftali Bennett of Israel was just in the U.S. recently, talking to Biden about that. What will happen if they [Israel] have to go attack Iran? What if Biden does enter this Iran nuclear deal? What does that mean for the rest of the Middle East? How will the Middle East respond to that if Biden does get back into this deal?

ROSENBERG: Well, this is one of the central challenges that I describe in the book. I interviewed Defense Minister Benny Gantz, and the top leadership in Israel. I’ve got to tell you, Lindsay, the new prime minister put on a good face [when he was in Washington recently]. He was very kind. He wants to build a relationship with Biden, and he wants to help Biden change course on Iran. But Israel and the Arab world have become deeply nervous. They see weakness in Washington. It's rattling our allies. It's emboldening our enemies. And I'm telling you right now, Israeli leaders are talking to me and other reporters behind the scenes, off the record, saying they’re getting ready to have to strike Iran. We hope it doesn't happen. But this is the worry — if the United States is going to abandon the Middle East, then Israel and the Arab allies, we’re on our own.

SPICER: Joel, real quick, before I let you go, you talked to all these Arab leaders firsthand. What is our current withdrawal from Afghanistan mean for our standing going forward with them?

ROSENBERG: Well, I think the biggest question is now what does Saudi Arabia do, right? They're not currently part of the Abraham Accords. But I think the Saudis have to be weighing, you know, “What if Biden and the Americans are leaving [the Middle East] and what if we can't trust them? Then the only people we can trust to really help us neutralize the Iranian threat would be Israel.”

There's a tectonic shift going on in Arab thinking. “Who's my friend, who's my ally?” They always thought in the Arab world that Israel was the enemy. They're changing their tune, and I'd be watching the Saudis to possibly make some major moves in the next months and maybe a year ahead.

SPICER: Absolutely fascinating. Again, the book is "Enemies and Allies." It’s so great when you have a firsthand account from these leaders around the world that we all need to know more of. Joel Rosenberg. Best of luck for the book. Thanks for always being here.

ROSENBERG: Thanks, guys. Great to be with you, especially on important topics like this.