JERUSALEM – As the war in Gaza heads into its fifth day, Israel is being attacked – not just by Hamas and Islamic Jihad terrorists, but by members of the media, Hollywood stars, politicians around the world and at the United Nations – for being the aggressor and using too much force against the Palestinian people.

In that context, “Fox News @ Night” anchor Shannon Bream on Thursday interviewed former Israeli Ambassador Danny Danon and ALL ISRAEL NEWS Founder and Editor-in-chief Joel C. Rosenberg to give her viewers the latest picture of what is happening on the ground and how Israelis view the conflict.

Here is the full transcript of the 6:12 minute interview on Fox News.

FOX NEWS ANCHOR SHANNON BREAM: Let's get some more insight into this continuing crisis tonight from a couple of folks who are actually on the ground in Israel. Danny Danon was Israel's 17th Permanent Representative to the United Nations. And New York Times best-selling author Joel Rosenberg has a new novel out, by the way, titled The Beirut Protocol, and has news websites there in the region tracking this as well. Welcome back to both of you.

BREAM: Joel, can you give us an update as to the situation – which is now very early in the morning for you there – on the ground? 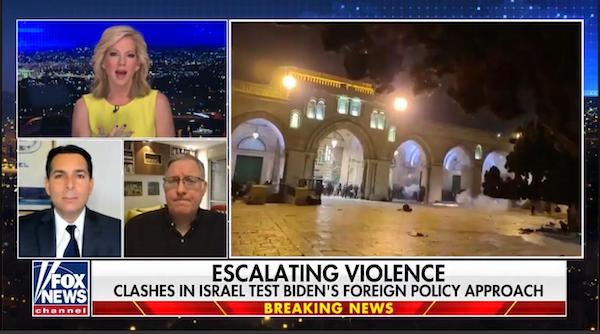 ROSENBERG: Yeah, we're continuing, as we speak, to take incoming rockets. There have been more than 1,500 rockets fired in the last 48 hours. Now, we're coming up on 60 hours. What you have to understand, Shannon, is that each of these rockets is a double war crime. These are rockets being fired from Gaza, from schools, from hospitals, from mosques, from businesses, from behind civilian populations. That's one war crime. Then, they're being fired here at in Israel – I'm in Jerusalem; we've had seven rockets fired at us – but mostly at the southern tier and Tel Aviv. But every time they fire, they're firing at civilian populations. And this is another war crime. And so you've got 3,000 war crimes. And yet you don't sense from the UN, for example, a clear condemnation of those who are perpetrating this horror – it’s a horror show going on – Hamas and Islamic Jihad. The world has to be unequivocal that terror is absolutely unacceptable and it's not our fault. There is too much [talk] going on in the media and in politics – Rep. Ilan Omar, for example – accusing us of terrorism. That's nonsense. It's reprehensible.

BREAM: I mean, this has been going on for centuries. This is not going to be something that's easily resolved. The President, or the White House, gave a readout tonight of President Biden's call with Prime Minister Netanyahu saying this: “He, President Biden, conveyed his unwavering support for Israel's security and for Israel's legitimate right to defend itself and its people while protecting civilians.” President Biden also “conveyed the United States’ encouragement of a pathway toward restoring a sustainable calm.” Ambassador, how do we get there? Is it possible tonight?

DANON: Not yet, Shannon. Israelis are under fire. We spent another night in shelters. I had to take my two daughters [to a bomb shelter] in the middle of the night, like millions of Israelis. And I was disappointed to hear the voices coming from Washington, from the new administration, calling on both sides to show restraint. There are no “both sides” to this conflict. You have a terrorist organization, Hamas – by the way, is the same organization that applauded the attack on 9/11 – and on the other hand, you have the closest ally of the U.S. So, please, don't call on “both sides.” We expect the U.S. to stand with Israel, to support us when we defend our people. And I will tell you that: Hamas made a huge mistake by attacking us. We are hunting down the leadership of Hamas. We will find them in their homes, in their offices, in the tunnels where they are hiding, until they will beg us for a cease-fire. This is not the time for cease-fire, yet. We will have to restore deterrence, and that's what we are doing now. 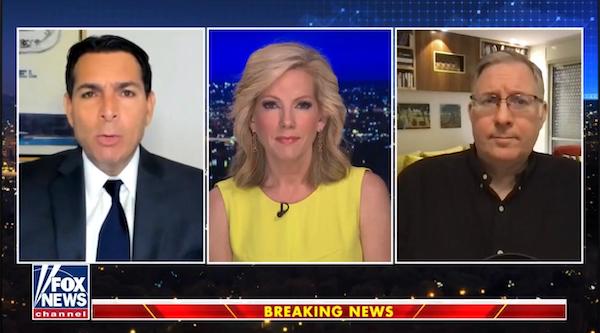 BREAM: So, Joel, let's talk about this in a way that addresses some of those issues. Because people are, you know – Hollywood is going crazy over this – people are tweeting about this, saying Israel is an oppressive regime, that they have stolen land. I know that you are one of those who are out there saying, among many people, that this is not about punishing the Palestinian people. This is about Hamas, a group that the U.S. classifies as a terrorist group, that gets funding from Iran, who wishes death to both Israel and the U.S. So, how do we have a conversation about this, about the primary actors here, but separating the civilians and the people who are endangered on both sides of this in the region?

ROSENBERG: Shannon, what's needed is moral clarity. You know, I'm a dual U.S.-Israeli citizen. I love both of these countries deeply. My sons have served in the Israeli army. One just finished last month. But I'm also an Evangelical Christian. And I want to say this: Gaza does need to be liberated – but not from Israel. Israel evacuated all of our people and all of our military in 2005. There's not a single Israeli soldier – not a single Israeli citizen – in Gaza. It’s completely liberated. They have beachfront property. They have natural gas off their borders. They could be building a paradise. And this tragedy is not just for us, Sharon, but for the Palestinian people of Gaza. They are being held hostage by the most wicked and evil regime on the planet. This is a regime that is inviting the destruction of its own people. One out of three rockets that Hamas fires, misfires and falls on the Palestinian people. This is insane. And for Europe, or the UN or Members of Congress, or anyone else, to act as though we have to “de-escalate on both sides.” No. One side is a group of terrorists. And they're trying to murder not only us – they're trying to destroy their own people. It's insane. And we need moral clarity from the White House, from Congress, from our allies. And we need President Biden to get out on camera – not just on a phone call; I appreciate that he at least called after 3,000 war crimes – he needs to get on television and make it clear: Who is the bad guy in this situation? George W. Bush did it. President Trump did when he was facing terrorists. Biden needs to do it as well.

BREAM: Well, there is a letter out tonight from 40 GOP senators saying that the Biden administration needs immediately to stop negotiating in Iran – in Vienna – with Iran because they're backing the situation, a group that we've classified as a terrorist organization. Thank you both. Our prayers are with the people of the region to stay safe and for peace to come. Thank you both.