From Soul to Sole: Global campaign aims to preserve the shoes of children murdered in Auschwitz
Search
November 20, 2022
Current top stories
commentary
Greed plus woke ideology caused FTX crash from $32 billion to $0
THE WEEK AHEAD: FIFA World Cup kicks off, the new Knesset aspires to limit the Israeli Supreme Court’s authority and the Bank of Israel readies another interest rate
What does the history of slavery have to do with today’s music? Everything, according to one Israeli fifth grade teacher
IDF soldier attacked by Israelis in 'shameful' incident
U.S. archivists find oldest-known star map beneath ancient Christian Syriac manuscript
guest column
Once a Jew, always a Jew!
Looking to shore up alliances against Iran, Azerbaijan to open an embassy in Israel
Iran blamed for bomb-carrying drone targeting Israeli-owned oil tanker off Oman
Ancient Christian monastery – most likely predating Islam – discovered in the United Arab Emirates
guest column
Christians and Jews unite to bless, comfort Holocaust survivors
Historic: Israeli President Isaac Herzog to make first state visit to Bahrain
Investigators find Iranian drones in Russia’s arsenal contain Israeli-made parts
Facing US pressure, Netanyahu reportedly tells Smotrich ‘no’ to Defense portfolio
Tourism in Israel shows strong recovery
Muslim identity supersedes statehood, Palestine imam says in al Aqsa sermon
Israeli fans warned to hide their identity at World Cup in Qatar
Romania issues legislation to protect Jewish ritual slaughter, kosher food
Israeli man with ‘completely reversed’ heart receives correction by cardiologists
Qatar’s treatment of foreign workers comes into focus as soccer World Cup kicks off
Next Israeli Cabinet likely to have just two women compared to nine ministers in previous one
Russia cautiously welcomes Netanyahu’s election victory
VIDEO: Major Leaguers visit Israel in effort to 'hit anti-Semitism out of the park'
As Israel's 25th Knesset sworn in, president urges legislators to be mindful of minorities, balance of power
FBI launches probe into death of Palestinian-American journalist Shireen Abu Akleh
WATCH TBN SPECIAL: What do U.S. midterm election results mean for Israel, the Iranian threat and the 2024 presidential race?
Turkey posts ambassador to Israel after four years
It's official: Netanyahu receives mandate to form a coalition – despite being on trial, president says
UN votes to seek International Court of Justice legal opinion about Israeli ‘occupation’
Six Germans drive 4,500 kilometers to deliver humanitarian gift to Israel
Holocaust survivors warn of rising anti-Semitism on 84th Kristallnacht anniversary
New coalition anxious to reform courts, make aliyah tougher
Holocaust survivor tells her story in Dubai, marking 84 years since Kristallnacht
VIDEO: Joel Rosenberg's take on the complicated relationship between the Israelis and Bibi Netanyahu
Social media influencer to millions launches video project on ‘How To: Never Forget’ the Holocaust
ISRAELI ELECTIONS – ANALYSIS
WATCH TBN SPECIAL: How did Netanyahu engineer his historic victory? Can he make peace with Saudis? Will he attack Iran?
The Temple Mount is the place to watch as a new government takes shape
Saliva-based pregnancy test by Israeli startup available next year
TRUMP 2024: ‘This will not be my campaign. This will be our campaign all together’
Security forces in the Republic of Georgia foil Iranian attempt to assassinate an Israeli citizen
Iranian regime reportedly feels encircled by ‘Zionist threats’
Israeli pop star answers Kanye West with Jewish-inspired outfit at MTV music awards
guest opinion
Evangelicals should be the first to care about the environment
Trump needs to 'read the room' and 'exercise humility' if he wants his base to support him in 2024
Human rights NGO says Iran has killed more than 320 civilians, including 43 children, 25 women
guest column
Does small Israel have outsized solutions for global food shortages?
KitePride founders create opportunities, value for victims of sex-trafficking, prostitution
guest opinion
Why the Law of Return must not be changed
Israel, Jordan, UAE replace ‘intent’ with ‘commitment’ to solar energy, desalination exchange
guest column
Why Kanye’s anti-Semitism matters
guest opinion
Should Israel be participating in the world’s climate change agenda?
Tehran residents back Iranian minorities against regime violence, protests being named ‘full-fledged revolution’
Holocaust survivor Arie Pinsker (92) inspects the collection of victims’ shoes on display at Auschwitz-Birkenau. Arie’s mother, father, and nine siblings were murdered in the camp by the Nazis. A subject of medical experiments during his time there, Arie survived the Holocaust and moved to Israel. (Photo: Tali Natapov/Neishlos Foundation)

A new initiative, titled “From Soul to Sole,” is undertaking the critical mission of preserving the shoes of the mostly Jewish children who were murdered in the Nazi death camp Auschwitz.

More than 8,000 shoes on display or stored at the camp were found to be rapidly disintegrating with the passage of time.

The conservation project is expected to spread over the course of two years. The initiative received initial funding from the Neishlos Foundation, yet still requires additional financial support and is asking for donations on its website.

“In so many cases, the tiny shoes left at Auschwitz are all that is left of young Jewish children murdered by the Nazis,” said Eitan Neishlos, the grandson of Holocaust survivors, who serves as founder and ambassador of the March of the Living organization in the Gulf states.

Neishlos revealed the project in an interview with ALL ISRAEL NEWS, emphasizing its importance “to ensure that Holocaust-deniers can never bury the truth.”

“In these shoes, they took their final steps, as they were ripped from their mothers’ arms and led to their slaughter. Their shoes were stripped from them mercilessly, as were their names, their dreams and futures,” he said. “By preserving these iconic shoes, we are preserving the memory of Jewish children who were the victims of perhaps the Nazis’ most harrowing cruelty. It is our responsibility as the next generation to keep their memories alive and give them a voice from the darkness.” 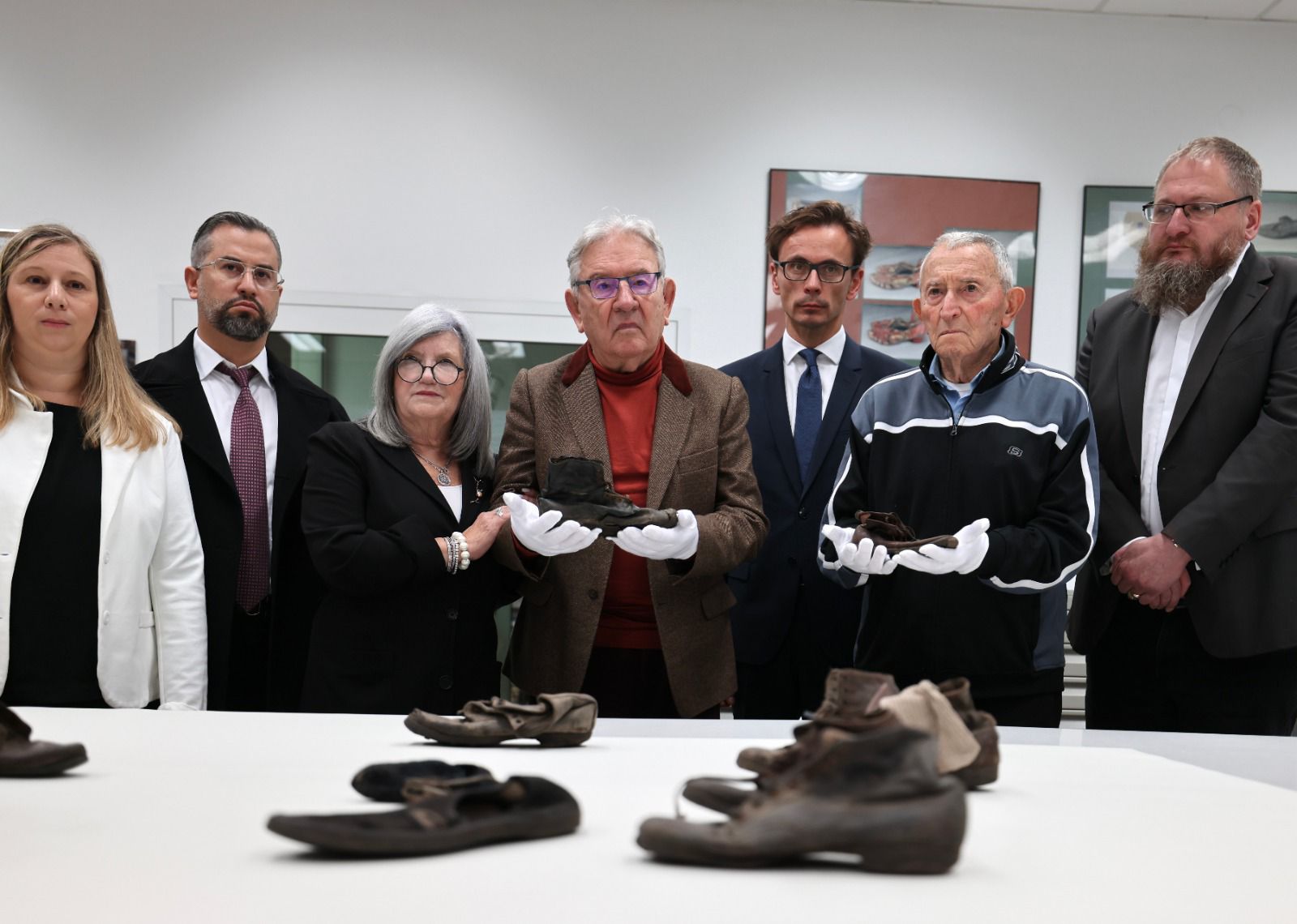 Auschwitz survivors Arie Pinsker (left center), and Bogdan Barnikowski, (right center) hold the shoes of child victims of the Nazis in the Conservation Lab in Auschwitz, joined by representatives of March of the Living, the Neishlos Foundation, and the Auschwitz-Birkenau Foundation. (Photo: Tali Natapov/Neishlos Foundation)

One of those children was Holocaust survivor Arie Pinsker, 92, who lost his entire family in the gas chambers of Auschwitz II-Birkenau, except for his older brother who saved his life. Pinsker was part of an experiment the Germans conducted on Jewish children in the camp; of the 1,000 children in his barrack who were part of the experiments, only four survived the war.

During a recent ceremony at the Auschwitz Memorial, Pinsker burst into tears at the sight of the tiny shoes and said: “It’s so hard for me to look at these shoes. I see them and think how maybe my twin sisters’ shoes are here too.”

International March of the Living chairman Shmuel Rosenman refers to the conservation of the shoes as “a moral obligation.”

The organization noted that approximately 1.1 million people from across German-occupied Europe were murdered in Auschwitz-Birkenau. Among the 1.3 million people deported to Auschwitz, there were some 232,000 children.

The largest numbers of children arrived at the camp in the second half of 1942. The majority of them were Jewish and immediately were murdered in gas chambers upon their arrival.

When Soviet troops liberated Auschwitz on Jan. 27, 1945, only about 500 children under the age of 15 were left in the camp, with all suffering from diseases and malnutrition.