Olmert could not have been more effusive about the leadership of the Emiratis.

He praised the UAE for being one of “the major centers of business in the world” and urged Israelis to “be humble” and learn from the Emiratis as they seek to do joint ventures and investments together.

But Olmert also criticized Palestinian Authority Mahmoud Abbas – whom he also called by his nickname “Abu Mazen” – for failing to accept the two-state solution deal that Olmert offered him in 2008.

He also said that in February of 2020 he met with Abbas in New York and urged him to embrace the “Deal of the Century” presented by then-President Donald Trump and use it as a starting point for direct negotiations, not because Abbas would like everything in the Trump plan but because it embraced the concept of a two-state solution.

Saying the world is “growing tired” of Palestinian rejection of every peace plan that has been offered for several decades, he urged Abbas to follow the example set by the UAE crown prince, show true courage, and re-enter direct negotiations with a new Israeli government.

Likewise, saying he very much hoped Benjamin Netanyahu – his long-time rival – would soon be removed from office, he urged apparent incoming Prime Minister Naftali Bennett and Foreign Minister Yair Lapid to also have the “guts” to reengage the Palestinians in direct talks.

It is time, Olmert said, for both sides to take “a great leap forward.”

The only way for Israel to have lasting peace and prosperity, he insisted, was to separate themselves from the Palestinians and let them have a state of their own.

Olmert spoke at the Global Investment Forum at the Armani hotel and conference center in the Burj al-Khalifa, the tallest building in the world.

The conference was organized by The Jerusalem Post and the Khaleej Times.

Yaakov Katz, editor-in-chief of the Post, interviewed Olmert in the conference’s final session. 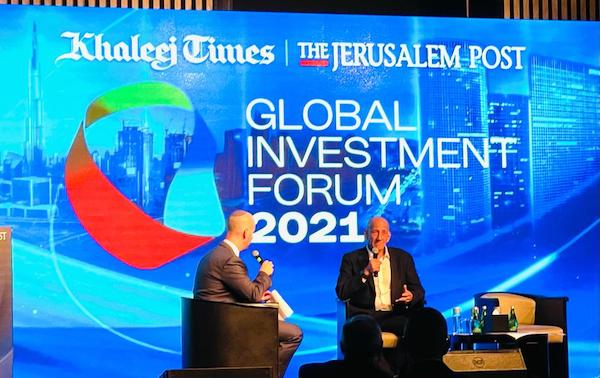 While I found the conversation fascinating, especially watching a former Israeli premier be interviewed by a kippah-wearing Jewish newspaper editor in a major Arab city, there were questions Katz should have asked but didn’t.

Olmert is a smart, experienced, interesting figure – his answers to these questions would have been intriguing, to say the least.

Still, what he did say is worth reading.

Here are some key excerpts from their conversation:

OLMERT PRAISES THE UAE AND ITS LEADERS

OLMERT CALLS HIMSELF A “GREAT OPTIMIST,” BELIEVES ISRAELIS AND PALESTINIANS WILL MAKE PEACE