Tea, tears and prayers: English-style tea shop in Jerusalem hosts livestream of Queen Elizabeth's funeral
Search
November 20, 2022
Current top stories
commentary
Greed plus woke ideology caused FTX crash from $32 billion to $0
THE WEEK AHEAD: FIFA World Cup kicks off, the new Knesset aspires to limit the Israeli Supreme Court’s authority and the Bank of Israel readies another interest rate
What does the history of slavery have to do with today’s music? Everything, according to one Israeli fifth grade teacher
IDF soldier attacked by Israelis in 'shameful' incident
U.S. archivists find oldest-known star map beneath ancient Christian Syriac manuscript
guest column
Once a Jew, always a Jew!
Looking to shore up alliances against Iran, Azerbaijan to open an embassy in Israel
Iran blamed for bomb-carrying drone targeting Israeli-owned oil tanker off Oman
Ancient Christian monastery – most likely predating Islam – discovered in the United Arab Emirates
guest column
Christians and Jews unite to bless, comfort Holocaust survivors
Historic: Israeli President Isaac Herzog to make first state visit to Bahrain
Investigators find Iranian drones in Russia’s arsenal contain Israeli-made parts
Facing US pressure, Netanyahu reportedly tells Smotrich ‘no’ to Defense portfolio
Tourism in Israel shows strong recovery
Muslim identity supersedes statehood, Palestine imam says in al Aqsa sermon
Israeli fans warned to hide their identity at World Cup in Qatar
Romania issues legislation to protect Jewish ritual slaughter, kosher food
Israeli man with ‘completely reversed’ heart receives correction by cardiologists
Qatar’s treatment of foreign workers comes into focus as soccer World Cup kicks off
Next Israeli Cabinet likely to have just two women compared to nine ministers in previous one
Russia cautiously welcomes Netanyahu’s election victory
VIDEO: Major Leaguers visit Israel in effort to 'hit anti-Semitism out of the park'
As Israel's 25th Knesset sworn in, president urges legislators to be mindful of minorities, balance of power
FBI launches probe into death of Palestinian-American journalist Shireen Abu Akleh
WATCH TBN SPECIAL: What do U.S. midterm election results mean for Israel, the Iranian threat and the 2024 presidential race?
Turkey posts ambassador to Israel after four years
It's official: Netanyahu receives mandate to form a coalition – despite being on trial, president says
UN votes to seek International Court of Justice legal opinion about Israeli ‘occupation’
Six Germans drive 4,500 kilometers to deliver humanitarian gift to Israel
Holocaust survivors warn of rising anti-Semitism on 84th Kristallnacht anniversary
New coalition anxious to reform courts, make aliyah tougher
Holocaust survivor tells her story in Dubai, marking 84 years since Kristallnacht
VIDEO: Joel Rosenberg's take on the complicated relationship between the Israelis and Bibi Netanyahu
Social media influencer to millions launches video project on ‘How To: Never Forget’ the Holocaust
ISRAELI ELECTIONS – ANALYSIS
WATCH TBN SPECIAL: How did Netanyahu engineer his historic victory? Can he make peace with Saudis? Will he attack Iran?
The Temple Mount is the place to watch as a new government takes shape
Saliva-based pregnancy test by Israeli startup available next year
TRUMP 2024: ‘This will not be my campaign. This will be our campaign all together’
Security forces in the Republic of Georgia foil Iranian attempt to assassinate an Israeli citizen
Iranian regime reportedly feels encircled by ‘Zionist threats’
Israeli pop star answers Kanye West with Jewish-inspired outfit at MTV music awards
guest opinion
Evangelicals should be the first to care about the environment
Trump needs to 'read the room' and 'exercise humility' if he wants his base to support him in 2024
Human rights NGO says Iran has killed more than 320 civilians, including 43 children, 25 women
guest column
Does small Israel have outsized solutions for global food shortages?
KitePride founders create opportunities, value for victims of sex-trafficking, prostitution
guest opinion
Why the Law of Return must not be changed
Israel, Jordan, UAE replace ‘intent’ with ‘commitment’ to solar energy, desalination exchange
guest column
Why Kanye’s anti-Semitism matters
guest opinion
Should Israel be participating in the world’s climate change agenda?
Tehran residents back Iranian minorities against regime violence, protests being named ‘full-fledged revolution’
British ex-pats and tourists gather at the Kumkum Tea House in Jerusalem to watch the livestream of Queen Elizabeth's funeral together. (Photo: All Israel News)

JERUSALEM—When the two minutes of silence at the end of Queen Elizabeth II’s funeral began on Monday, a hush fell over the Kumkum Tea House in Israel’s capital as well.

Even the normally busy and noisy Bethlehem Road seemed to comply with the gravity of the occasion with nary a car passing by for about 30 seconds.

The charmed atmosphere of the teahouse became a solemn assembly for about 50 British expats and some tourists from England, Wales and Canada to watch the funeral together and to pay their last respects far away from the ceremony in London.

Clinking china, steaming tea and fresh scones were the appropriate backdrop to the pomp and circumstance of the ceremony. For those gathered, they felt the camaraderie of sharing their traditions and respect for a monarch whose time on the throne spanned most of their lifetimes.

And for Elisheva Levy, the British Israeli who runs Kumkum, she wanted to create the space for like-minded people to feel at home and to process the moment together. Many Israelis couldn’t quite relate to the feelings of Great Britain's ex-pat community, Levy said.

“I did this to bring people together. I knew people wanted to get connected. You just feel like so lost here. No one in Israel gets it,” Levy said. “And just like I said, I wanted everybody to feel at home. I felt like I was hosting people in my own home.” 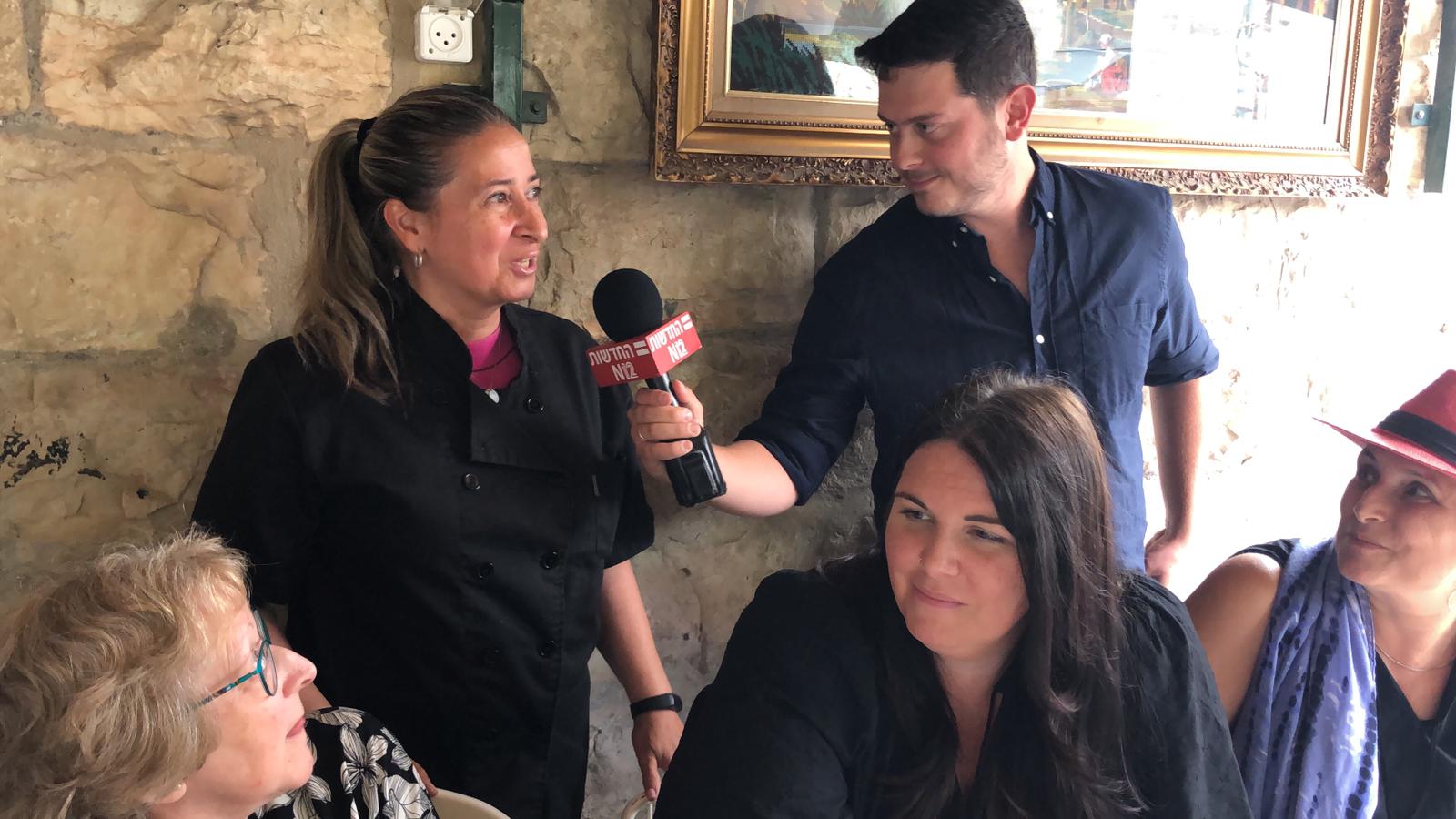 Elisheva Levy, owner of the Kumkum Tea House in Jerusalem, was interviewed by the Israeli media during her livestream of Queen Elizabeth's funeral. (Photo: All Israel News)

Indeed, as one tearful customer left, she hugged Levy and thanked her for hosting the livestream.

“That made it all worth it,” Levy said wiping her own tears. “Did you see how touched they were?”

Everyone present shared the sentiment.

“It's a historic moment and I’m sure that it would be special to be there,” said Nadia Levene who made aliyah (immigrated to Israel) more than 30 years ago from London. “Maybe it doesn’t quite feel the same in Jerusalem, but it was really special coming together and watching it all together.

Most everyone present – even Jews who attended Anglican schools in England – recited the prayers and sang the hymns. Very few dry eyes remained by the end of the funeral and, in one voice, everyone present repeated, “God save the King.”

“It’s the end of an era,” said Nadine, who didn’t want her last name used. She said her father knew the queen and she had been to Buckingham Palace once.

But Israel has been her home from a young age.

“I’ve always thought of myself as being more Israeli than British, but this brought me back to the British side of me,” she told ALL ISRAEL NEWS. “All the people sitting here feel the same way that I do. It brings you back to something very emotional – the end of an era, the end of something we have always known.”

Two British tourists who are Christian were among the Jewish Israelis at Kumkum.

“She was our queen. She was our head of state. She upheld the Christian faith. She served the Commonwealth of Nations. She was just devoted to service,” said Rosemary Bramber.

She was “devoted to her Lord and Savior, Jesus Christ – a shining paragon of virtue,” Penelope Francon-Smith said. “She wasn't perfect, but, you know, she was beautiful. Our lovely queen.”

Bramber said she welled up with emotion at the significance of the committal at the end of the funeral.

“It's that moment when (the minister) commits the soul to God,” she said. “And of course, we know, though when the person has died, their soul has already gone to God. But there’s something very powerful in a funeral, because that's the moment, in a way, that you feel that you really say goodbye.”

“And immediately after that they said that they had the trumpets and, ‘God Save the King,’” signifying the transition of power.

For Estelle Rachamim-Rayman coming to the Tea House was important.

“It’s not just the watching; its the feeling of being with like-minded people. We all grew up in the U.K. with the queen,” Rachamim-Rayman said.

If she had watched at home, she would have been distracted with chores or simply texting friends who were also tuned in. But being with others was more meaningful.

“It's the feelings. It's everything that goes with it. It wasn't just the watching,” she said.

Kumkum distinguished itself right after the queen's death on Sept. 8 as the Jerusalem destination to pay homage to Queen Elizabeth II with a display of flags and photos of Great Britain's longest-serving monarch.