JERUSALEM – With the American surrender to the forces of radical Islamism underway in Afghanistan, President Joe Biden has suddenly forced two critically important questions onto the front pages of news media around the world.

As it happens, these questions lie at the heart of a brand-new nonfiction book by Joel C. Rosenberg – the founder and editor-in-chief of ALL ISRAEL NEWS and ALL ARAB NEWS – and could not be more timely. 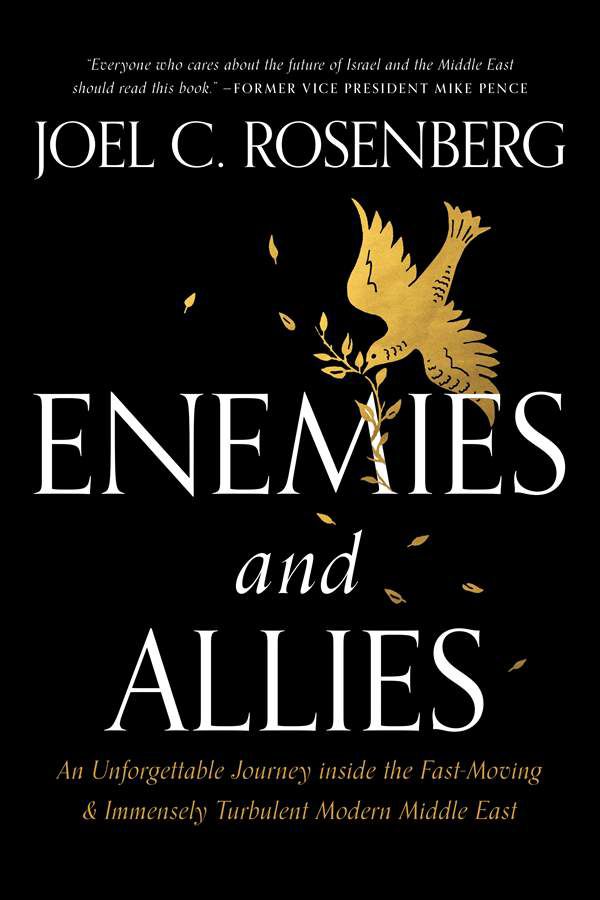 Enemies and Allies, to be released on Sept. 7

The book is the first of its kind – indeed, the only book on the market – in which the author includes exclusive and extensive interviews and in-person conversations with Israeli and Arab presidents, prime ministers, kings and crown princes.

Rosenberg had the remarkable opportunity to spend hours and hours with these leaders over the past several years.

Most of the conversations were on the record, and thus Rosenberg takes his readers inside the thinking of the most powerful and controversial leaders in the region – and in the U.S. – on the most sensitive and controversial of topics.

Here is an extended excerpt from the preface to the book:

Universally known by his initials, MBS, he is the richest, most mysterious, and most controversial Muslim leader on the face of the planet. Only in his thirties, he is positioned to assume the throne and lead his nation for the next half century.

Is he the bold reformer that he and his admirers claim? Is he truly advancing the most audacious economic, social, and geopolitical changes in the history of the kingdom in order to make it a magnet for trade, investment, and tourism? Or is he, as his critics contend, a “reckless and dangerous” rogue, an “impetuous and dangerous young royal,” a “wrecking ball,” a “toxic” figure who must be removed from the line of succession?

In November 2017, a thirty-year veteran of the Central Intelligence Agency and expert on the Saudi kingdom wrote a 272-page book without meeting or interviewing MBS.

In the spring of 2020, a New York Times reporter published a 384-page biography of MBS without meeting or interviewing him.

In September 2020, two Wall Street Journal reporters published a 368-page biography of MBS, also without meeting or talking to him.

I had the opportunity to meet with MBS twice. I have spoken with him at length and on the record. The first time was in his palace in Riyadh, the capital of the kingdom, where our meeting lasted for two hours. The second time was in Jeddah, the kingdom’s summer capital, where we met for another two hours. I also spent many more hours with his most senior advisors. In the first book of its kind, then, I will take you inside those conversations. You will hear the crown prince answer direct and difficult questions in his own words. 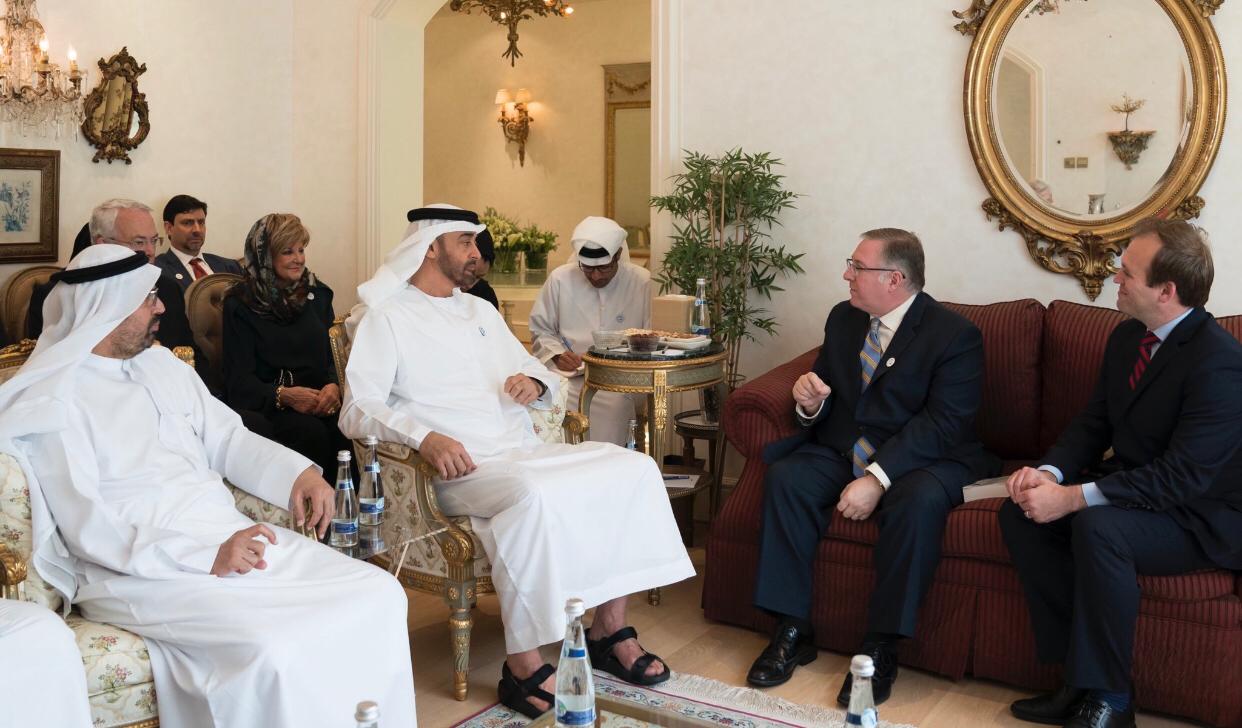 Rosenberg meets with the Crown Prince of the United Arab Emirates at the royal palace in Abu Dhabi in October 2018. (Photo: ALL ARAB NEWS)

His admirers hail him as a hero who is saving the world’s largest Arab country from radical Islamists hell-bent on transforming Egypt into a Sunni version of the Shia terrorist regime in Iran. Supporters praise him for advancing a moderate and tolerant vision of Islam, working hard to revitalize the once-moribund Egyptian economy, working closely with Israel to fight terrorism and promote regional peace, and working consistently to protect the largest Christian population in the Middle East from being butchered by the radicals. He also commissioned the construction of the largest church in the history of the region and presented it as a gift to his nation’s Christians on their Christmas Eve.

His critics, however, denounce him as a modern-day “Pharaoh” and a cruel dictator who has made Egypt more dangerous than at any time in recent history. Who is right? And what does the future hold? Events in Egypt are moving so quickly that few books have yet tackled the topic. One was published in 2018 by a New York Times reporter who did not meet or interview President Sisi. I have had the opportunity to meet President Sisi on five separate occasions, and I’ll take you inside the palace and let you hear him make his case in his own words.

Widely known by his initials, MBZ is one of the most private yet influential leaders in the Arab world. He almost never gives interviews or speeches, preferring to work quietly behind the scenes.

Few know that he was born in an evangelical medical missionary hospital.

Few know how he and his family—notably his father—built the UAE into one of the most advanced and tolerant nations in the Arab world.

Fewer still know how he and his colleagues came to stun the world by signing the first peace treaty with Israel in more than a quarter of a century.

Yet, having met with MBZ for hours and having built friendships with members of his inner circle, I will introduce you to MBZ and explain his importance in the new Middle East.

He is a monarch. A Muslim. And a moderate. He is a direct descendant of the prophet Muhammad. With an English mother. And he governs half of the Holy Land. He has been in power longer than any other leader in the Arab world. He is a faithful friend and ally of the United States. A trusted peace partner with Israel. Even so, few really know who he is, what he believes, or how he sees the future of the region. After five meetings with this remarkable man, I will take you inside his palace and his kingdom and let you meet him for yourself.

How was it possible that a presidential candidate with no prior political or foreign policy experience—a man who called for a complete ban on all Muslims entering the United States (a position I publicly denounced during the 2016 campaign)—went on to become the most pro-Israel, pro-Arab president in American history, crushing the Islamic State, withdrawing from the dangerous Iran nuclear deal, forging deep alliances with the Sunni Arab world, and brokering not one but four astonishing Arab-Israeli peace deals, more than any American president in history?

His strategy to advance peace and security in the Middle East was routinely mocked and dismissed every step of the way. Why, then, is it working?

And how did it come about that a once “Never Trumper” like me was invited to meet with the president, vice president, secretary of state, and members of the White House’s Mideast policy team and even attend the historic Abraham Accords signing ceremony on the South Lawn of the White House?

I’ll take you behind the scenes and tell you the inside story.

After the most expensive, contentious, and controversial presidential election in American history, everything in Washington changed yet again.

Though he had served in Washington for half a century as senator and vice president, most Americans—and certainly most Israelis, Arabs, and others in the Middle East—were asking: Who is Joe Biden? What is his track record in the Middle East?

How will he deal with our enemies and our allies? Is he determined to follow unwaveringly the policies of President Barack Obama? Or have Biden and his team learned critical lessons from the flaws and failures of the Iran nuclear deal? Are they absorbing and properly analyzing how rapidly the Middle East is changing and the implications of those changes?

With such high stakes, I interviewed American and foreign officials who have worked closely with Biden for years and have known him well, and I will take you inside his world and let you hear his views in his own words.